How do you tell a story?: The 5th annual Urban Design Storytelling Symposium mapped it out

How do you tell a story?: The 5th annual Urban Design Storytelling Symposium mapped it out 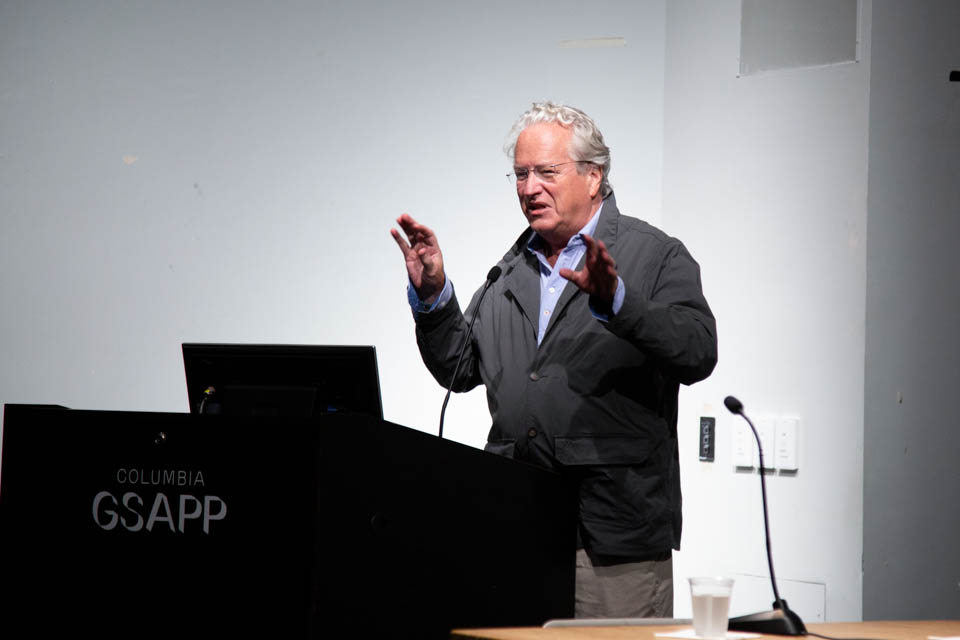 Writer, filmmaker, and adventurer Jon Bowermaster kicked off the presentations.

“If you can tell a story, it doesn’t matter what the medium [is],” said Jon Bowermaster, one of three storytellers who spoke on campus on Friday as part of Narrative Practice: the 5th Annual Urban Design Storytelling Symposium.

The symposium was led by Adjunct Assistant Professor Cassim Shepard and organized by the Urban Design program at Columbia Graduate School of Architecture, Planning and Preservation and took place in Avery Hall’s Wood Auditorium. It included guests from a variety of different specialties, all of whom used storytelling in their respective disciplines.

Writer, filmmaker, and adventurer Jon Bowermaster kicked off the presentations by drawing readers into his world of storytelling. Much of his life has been spent traveling around the world in order to gain insight on climate change issues, especially those related to “man’s relationship to ocean,” in his words. For his most recent project, he had traveled to over 80 distinct countries.

Bowermaster began his career as a print reporter and wrote for a mixture of books and magazine jobs for over 20 years, before discovering his passion for film. To him, film was not too different from writing; it was simply another way to tell a story. Bowermaster spent 10 years traveling around the world, primarily by sea kayak. For about 10 years after his adventuring, he spent his time making various documentaries, all of which focused on oceanic themes and issues.

Despite the vast knowledge he has accrued during his extensive travel, Bowermaster had an epiphany one day that he instead wanted to tell stories from home.

In recent years, one such project has been Hudson River Stories, a series of documentary videos that seek to uncover the untold stories of the Hudson River and raise awareness for its protection.

Bowermaster also spoke of his work at Bard College, where he recently taught a course entitled Multimedia Environmental Storytelling, in which students were tasked with selecting an environmental issue and a medium through which to tell its story. Indulging the audience in a quick aside, Bowermaster recounted an anecdote of a particular question one of his students had during class.

“At the beginning of week five, one of the students asked me very shyly in class’ ‘Um, how do you tell a story?’... I was taken aback a little bit, because that’s what I do,” Bowermaster said. “My whole life has been storytelling. So I just assumed that everybody can tell a story. For me it's instinctual. But I assumed that that just came naturally to everyone.”

After Bowermaster’s talk, Nellie Hermann brought a medical perspective to narrative storytelling. A graduate of Brown University, Hermann is the creative director of the Program in Narrative Medicine at Columbia University and has published two novels, The Cure for Grief and The Season of Migration. For the past decade, Hermann has worked teaching undergraduates, medical students, graduate students, and clinicians about fiction and narrative medicine.

Having spent an extensive amount of time visiting various family members in hospitals during her formative years, Hermann holds a personal stake in the work that she does today. She brings creativity into the lives of medical professionals who otherwise would have no outlet for writing or storytelling.

“What has become my sort of angle into the work is basically the idea that each of us are practicing creativity in all kinds of ways throughout our day no matter what we do,” Hermann said, speaking to the importance of having a creative outlet.

Ayesha Williams of the Laundromat Project provided a more local and community-oriented perspective in storytelling and helped to showcase just how powerful storytelling can be in small communities, particularly throughout New York City.

Williams is the deputy director of the Laundromat Project, an organization aimed at empowering members of small communities, and an art professional with over a decade of experience with artists, program coordination, and organizing funding for galleries and nonprofits. Community is also important to Williams outside of her work, as she serves on the boards for the Marcus Garvey Park Alliance and The Possibility Project.

Williams emphasized the essentiality of the storytelling process in the Laundromat Project’s mission, which aims to “advance artists and neighbors as change agents in their own communities with a national view of the world.” She also spoke about several projects within the Laundromat Project that are taking place across the five boroughs that concern issues ranging from poor air quality to forming communities of immigrants by way of zines.

The symposium concluded with a convergence of all the guests, as they gathered for a panel with Professor Cassim Shepard moderating. With questions posed from both the audience and Shepard, each guest further discussed the importance of storytelling, regardless of one’s particular discipline. To kick off the discussion Shepard inquired on how the guests felt about the “afterlife” of stories and how they are becoming understood in the world.

“I think that just in the way we are consuming information and consuming media now I think it's becoming more recognized as a tool of power that we can wield freely without being told or questioned to do so,” Williams concluded.

Staff writer Bella Bromberg can be contacted at bella.bromberg@columbiaspectator.com.