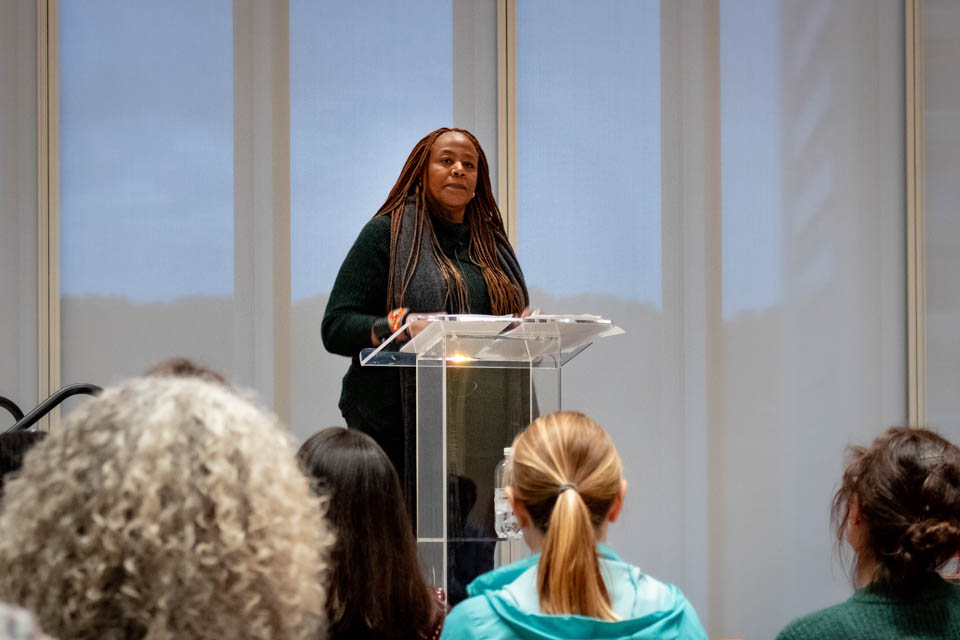 The playwright discussed how theater can react to changing discourse surrounding race.

Dael Orlandersmith leaned over the podium, never letting the echo of her voice die in the auditorium. She allowed her voice to run at a gallop, enunciating every “t” and “d” with a punch as she engraved a brand new, bittersweet piece onto the hearts of the audience.

On Wednesday evening on the eighth floor of the Lenfest Center, Orlandersmith and Lynn Nottage engaged in a discussion titled “Racial Profiling in Theatre.” Dael Orlandersmith is a playwright and novelist who has won an Obie Award and whose play “Yellowma” was a Pulitzer Prize finalist. Nottage is an associate professor at Columbia and a playwright, and she has won two Pulitzer Prizes for her works, “Sweat” and “Ruined.” Although the event was centered on issues of race in theater, the conversation and audience Q&A touched on a breadth of topics.

Orlandersmith began by performing a new fusion piece she had written. Inspired by the adaptability of the fusion form—a type of writing that is simultaneously performative, poetic, and novelistic—the playwright gave the audience a taste of a completely different kind of work than she had ever created.

In the piece, Orlandersmith observes characters and social dynamics in Fanelli's Cafe on the Lower East Side, moving from the suspect anecdotes of a handlebar-mustached man named Monty to a loose-tongued bigot named Brian. Finally, she shifts to observing a disconnected family having a meal. Orlandersmith takes sympathy for the boy in the family who seems to be neglected by his alcoholic mother and rejected by a distant, chauvinistic father – constantly rubbing his bicep tattoo.

When Orlandersmith had finished the piece, Nottage took to the stage to chair the discussion.

One of the topics addressed by Orlandersmith was the problematic pigeon-holing of creatives through labelling, whether it is labelling a creative as a black artist or black female artist or even giving excessive weight to where they are from.

For Orlandersmith, strangling the breath of a writer’s work through giving them labels prevents them from being what we should all strive for—in the words of Robert Burns, “a citizen of the world.” The playwright made sure to repeat this phrase throughout the discussion, using it as a pivot to think about her creative process and advice for writers often unwillingly shoved into topical cul-de-sacs.

“We are learning a new language right now, which is great, we're learning about gender and stuff, but understanding it's a given to be black and female, you can write about anything you want,” Orlandersmith said. “And by you simply feeling you have to write a certain way, you're simply playing to the very biases of oppression.”

The biases of oppression were no starker during the Michael Brown case in St. Louis, when an 18-year-old man was shot by a police officer in 2014. The following year, The Repertory Theatre of St. Louis asked Orlandersmith to create a work that could be used for open communication and healing.

“The Michael Brown case was just very complicated. Theater was a tool for people to sit and talk,” Orlandersmith said. “And so what I did was, I interviewed people, and I said I do not have the right to play you, and this affects me just as another person on the planet.”

The importance of people knowing that their experience and pain is simultaneously individual and universal, as our inward feelings are often so similar, was crucial for Orlandersmith to express to her interviewees, so they did not feel caricatured or undermined.

Her play “Until the Flood” was the result of hearing the stories of Michael Brown Sr. and the community close to Brown. , By 2019, it has been performed multiple times across the country.

“Now it's been done about four or five times, and I'm seeing the way visually the people being used are being stereotyped,” Orlandersmith said. “And, part of me wants to say something, and part of me has to go, you know what I know what's going on. What they're doing in the other big room, I can see that. They've got this one woman, who's extremely huge, and I hoped to God that whoever's doing this has not turned this woman into a caricature.”

Alongside casting that periodically caricatures human beings, often the demographic imbalance of the audience seeing Orlandersmith’s plays is also notable—tending to be white, affluent, and older. Responding to a question posed by one of the audience members on Wednesday, Orlandersmith explained that while you want an audience that can really feel the healing power of the play, producers and directors have some puzzling ways of trying to include a more diverse crowd.

“Their ways of trying to do that are very screwed up. I've been asked to go to churches and talk to people. Like, what the hell? What am I doing at church talking to somebody? That's ridiculous to ask me to do that,” Orlandersmith said. “[...] You have people that work within communities, schools, hospitals; have them come in.”

Apart from various forced efforts from organizers to create a more diverse audience, the playwright has also noticed how this has led to interpretations of how her material might speak to particular groups.

Looking to the future, Nottage is currently working on a Michael Jackson musical. While Nottage knows the biographic piece may open a can of worms, that can is a reality that the world needs to discuss. And much like the realities of caricaturization, ghettoization, and undiversified audiences that Orlandersmith addressed at this event, sometimes the hardest questions need to be tackled head-on.