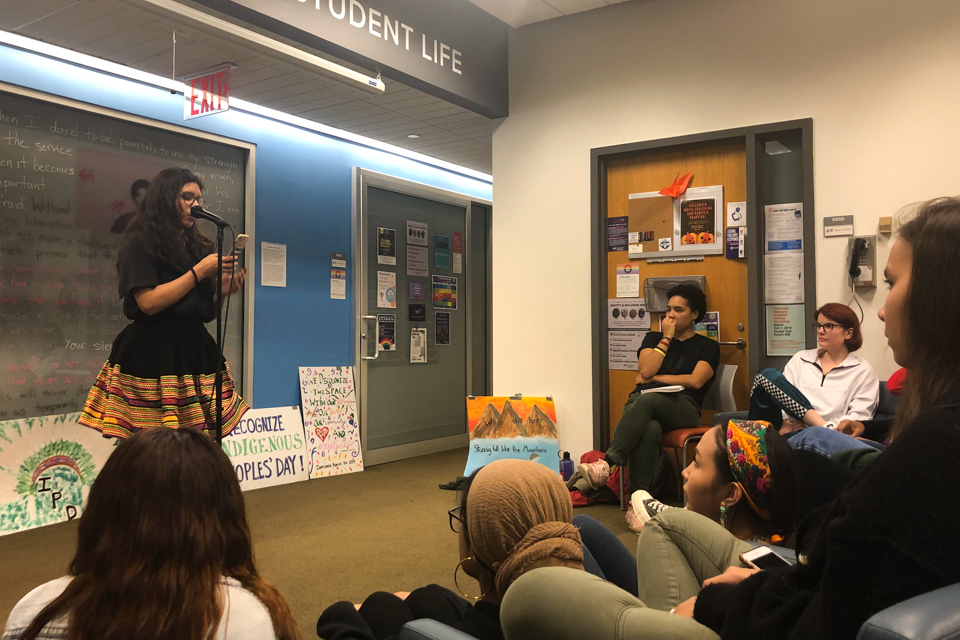 The Leslie Marmon Silko Reading and Open Mic began with an acknowledgment of the stolen Lenape land on which Columbia’s campus resides. This moment of bittersweet resilience, brought forth by the tragedy of Indigenous land occupation and the triumph of reclaiming a lost voice, imbued the room with life. From that complex mix of emotions poetry, music, and art arose.

Soft music filled the room as people read and digested the meaning of their given quotes, and conversation among attendants reached a peak when Tate and Brown took the microphone. Their happiness and pride were palpable, filling the room and exciting the audience which burst with laughter and choruses of snaps. This Indigenous Peoples’ Day, everyone was simply happy to be surrounded by friends.

The NAC had spent the majority of the day tabling by the Sundial, demonstrating the presence and power of the Indigenous community on campus and calling on Columbia to formally recognize Indigenous Peoples’ Day (as half of the Ivy League schools have already done). Now, in collaboration with the Butler Banner Project, the NAC wanted time to celebrate and build community.

The night was meant to honor both Indigenous Peoples’ Day and Leslie Marmon Silko, a writer of Laguna Puebloan, Mexican and Anglo-American descent who is renowned for her contributions to what is known by literary critics as the Native American Renaissance. She is also one of the eight women authors that currently adorn Butler’s façade.

After acknowledging the Lenape land upon which Columbia sits, Tate and Brown invited all in the room to take the stage (or carpet, as it were) and share anything they felt. Self-written and published poems, music, and improvised statements from the heart were all welcomed in the space.

A steady stream of attendants began to take to the microphone to perform. Students and community members representing the Pueblo people, Cherokee people, and Navajo people, among many more, greeted the audience in their Indigenous languages and shared their poetry, music, and stories.

One student recited pieces from “Living the Spirit: A Gay American Indian Anthology,” which highlighted the complexity of interracial and homosexual relationships as an Indigenous person. Another student shared completely instrumental music, whose driving beat and ethereal chords floated across the room and incited foot tapping and head bobbing. Another person shared personal stories of their community at home, drawing laughter and smiles as they recounted humorous tales about their family.

Poetry that highlighted struggling Indigenous communities, white supremacy, and history of Indigenous erasure drew thunderous applause. The night ended with a group listening to the slave spiritual “Swing Low, Sweet Chariot,” which was originally written by Wallace Willis, a slave of Choctaw Native Americans. This selection highlighted the complexity of race within the Indigenous community.

“[Stories] aren't just entertainment,” Tate said, quoting Silko. “Don't be fooled. They are all we have, you see, all we have to fight off illness and death.” This sentiment was on full display during the open mic, as native students and allies alike were entertained while remaining resilient and advocating for change.