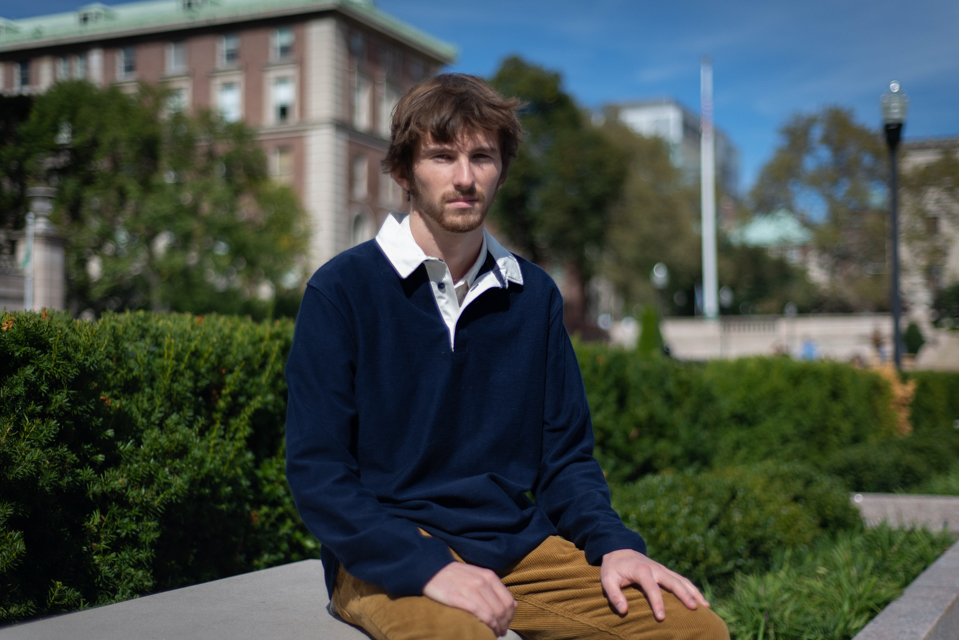 Ballet dancers on a tennis court. A jazz band playing to an audience clad in all-white attire. A French woman dancing on the subway. And the story of two undergraduate students on their search for director Paul Thomas Anderson.

Earlier this semester, a new, radical web series made its appearance in the world of Columbia film and television. The series, Sankyo Stream of Consciousness, named after the series’ protagonist, is an eclectic fusion of experimental foreign and film noir with traditional narrative filmmaking that results in a fascinating visual display of style and storytelling. A six- to seven-minute episode will blow your mind.

It’s not particularly easy to describe the premise of the show to those who haven’t seen it. At its core, the show is about two film students pursuing their goal of interviewing the famous director Paul Thomas Anderson (Boogie Nights, There Will Be Blood) and the various distractions and existential crises that ensue from that pursuit.

However, the show also features a number of wide departures from the original narrative that can, perhaps, only be described as experimental. Dream sequences, auditory hallucinations, and mixed-media manipulation run rampant in various episodes, and rarely does the dialogue explicitly state the relevance of these digressions to the central story. According to Campbell, a larger theme throughout the show is merely the act of creative expression itself.

“It’s pretty meta. It’s evolving as we think of it. Ultimately, we’re thinking about what we’re going to get out of this—whether it’s more for us or for other people—and how much we want the show to be about us as people. Or, instead, whether it’s about showing other people about this character, Paul Thomas Anderson,” Campbell said.

Many of the dream-like scenes throughout the series attempt to explore the fundamental nature of filmmaking itself. In one scene, Sankyo reflects on his experience of seeing East Coast architecture by train. He humorously considers how he never gets tired of seeing White Castle and then, in a moment of self-awareness, asks the audience explicitly, “What do you want to see endlessly? What do you want to pass by millions of times and not get sick of? Anything?”

“It takes a while to understand that [the dream sequences] aren’t related to the main narrative but still have some function as a projection of what’s going on inside these character’s heads,” Campbell said.

New York gets plenty of screen time in Sankyo Stream; a Columbia-made series that doesn’t restrict filming to the boundaries of the Columbia campus. Shooting locations have included Riverside Park, Central Park Lake, and the Wesleyan campus. The series intro focuses in on the iconic New Yorker sign above the Wyndham Hotel on Eighth Avenue, along with clips from around the city that feature St. John’s Cathedral and the Jenga-esque Leonard St. condo highrise in Midtown.

“We wanted something that feels very New York. And we thought, “What could we sensibly do with our means that makes sense?,” Campbell said.

The deliberately heavy-handed artistic style of the series also displays a particular New York aesthetic. Many original segments of the series were filmed using a Super 8—an 8mm camera dating back to 1965. The result is a grainy, black and white picture that emphasizes the city’s industrial qualities. The ancient camera, however, came with its own challenges.

“The camera itself is only, like, 25 bucks, but the film is pretty expensive. It takes about three weeks to actually get the film back from processing so that was sort of an exercise in patience for me,” Campbell said.

Sankyo Stream has also received contributions from other artists on campus. Fitch, one of the series’ two main characters, is played by Harris Solomon, CC ’22. In addition to acting on “Sankyo Stream,” Solomon is a theater student who contributes to Third Wheel Improv and has performed for the Varsity Show. Bella Barnes, CC ’22, has written, directed, and choreographed multiple scenes for the series, and collaborated with Campbell on music selection and content for various episodes; she has also performed as Paul Thomas Anderson’s babysitter on the show.

Though mind-bending and introspective, Sankyo Stream seems to be looking for something its audience has never seen before. A genre in and of itself, the show seems to be seeking some fundamental reality in its own presence. As the audience watches, the show is actively considering why it exists, and the story of it coming to fruition is the story the audience watches unfold. In the process, there is something new coming alive—something honest.

In episode two, during a bit of monologue after filming a concert for Maude Latour, CC ’22, a popular “pop-ish” singer-songwriter with an iconic sound and presence, Sankyo has a small epiphany.

“Maybe this is what I should be doing—following people around and capturing their personas. Because even if it’s a persona that Maude is perfecting, there is still some truth to it. And maybe the truth might be the most captivating thing we could capture with any movie.”

Maybe there’s something to that effort.

Correction: A previous version of this article did not provide the full extent of Barnes’ involvement in the show.

Staff writer Lee Alexander can be contacted at lee.alexander@columbiaspectator.com.