“Black, Here, and Queer” empowers black queer, trans, and non-binary artists through an intimate display of visuals and performances

“Black, Here, and Queer” empowers black queer, trans, and non-binary artists through an intimate display of visuals and performances 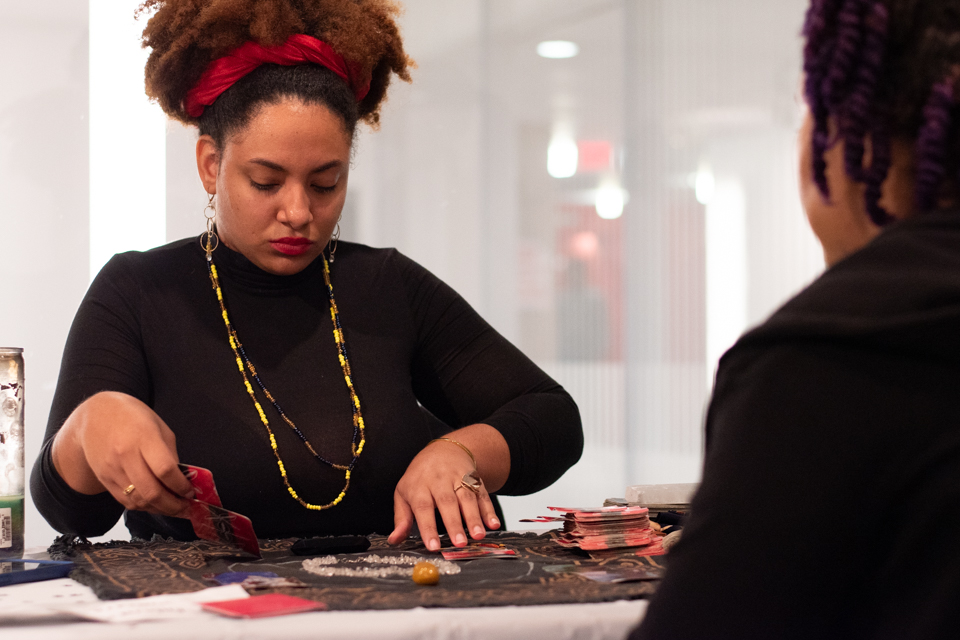 The summer before their sophomore years, Briana Wood, CC ’22, and Blossom Maduafokwa, BC ’22, began separately conceptualizing a similar idea. What if they curated a showcase that centered on black students and their artwork as part of Columbia’s Queer Awareness Month? When they both returned to campus and realized their shared interest, joining forces was an easy choice.

“We were like, ‘Oh, let’s have a black, queer, fem-centered, trans-centered, non-binary centered showcase for BOSS,’” Maduafokwa, who is the Community Outreach Chair for the Barnard Organization of Soul Sisters, told Spectator. “And then Briana during the school year reached out and was like, ‘Oh yeah, BSO is having an art showcase for queer, trans, non-binary people for [Queer Awareness Month].’ And then we were like, ‘We’re doing the same thing,’ and she was like, ‘Tea.’”

“[An art showcase] was what I settled on because I figured it would be something kind of unique. … And also it would be great to focus on black queer, trans, and non-binary folks,” Wood, BSO’s LGBTQAI+ liaison and a member of the board of Proud Colors, said. “Just, creating a space that we don’t see in the world, especially on campus, to share their art.”

Students began the evening by mingling with friends and making new ones, enjoying the spread of soul food and tarot card readings by Liner Nuñez. McFarland kicked off the program by performing her first spoken word poem of the night.

“As one who is black and queer myself, it’s important to show my art,” McFarland said. “I think a lot of art that is seen as very popular art, that is put in museums, [is] all very Eurocentric, and I think people forget that like there’s other black artists … who are not being highlighted in the broader society.”

The McCagg Gallery’s floor-to-ceiling glass windows and high ceilings allowed for a dynamic space to showcase the multimedia displays. Excerpts from Christian’s photo series centering on his Guyanese-American identity were projected on a panel on the right side of the room. Adjacent to these were three portraits and a cityscape drawn by Zondervan. With the performers taking center stage, viewers and artists were able to come together to admire the work and discuss its meaning.

Lights were dimmed for the second half of the program, where McFarland took the stage once again to perform a second spoken word poem. The poem was a letter to her younger self, or, as McFarland put it, to anyone who could relate. She addressed “you” as the subject, but ultimately ended on a personal note, saying simply: “Love, Sabrina.”

This was followed by a closing musical number by Dugué, who played her guitar and delivered a song she wrote exclusively for the event. Her voice was unwavering in her delivery, but she maintained a softness that could have been used to sing a lullaby.

Illuminated solely by the purple string lights wrapped around the foot of the stool they sat on, these artists’ performances were marked by the intimacy of their delivery.

“This [song] was more about my queerness than my blackness, because you know, I think you can find a space for both of them, but for me, right now, I wanted to focus on my queerness in that song,” Dugué said.

Queer Awareness Month is an annual series of events throughout the month of October, which is also LGBT History Month, and focuses on hosting events that empower the LGBTQ community on campus. This year’s theme is “Queer Galaxies: To Fluidity and Beyond.”

Every detail of the event was planned in hopes of creating an intimate, safe space for artists and viewers alike. Both Wood and Maduafokwa hoped to represent as many voices and talents of those in the black queer, trans, or non-binary community as possible. They sent out a Google Form to artists both on and off campus, along with asking a few of their close friends to share their work.

“I just think visual art is … allowing people to express themselves, which is a societally taboo thing, like allowing self-expression in a place with other people who may also have been barred from self-expression,” Maduafokwa said.