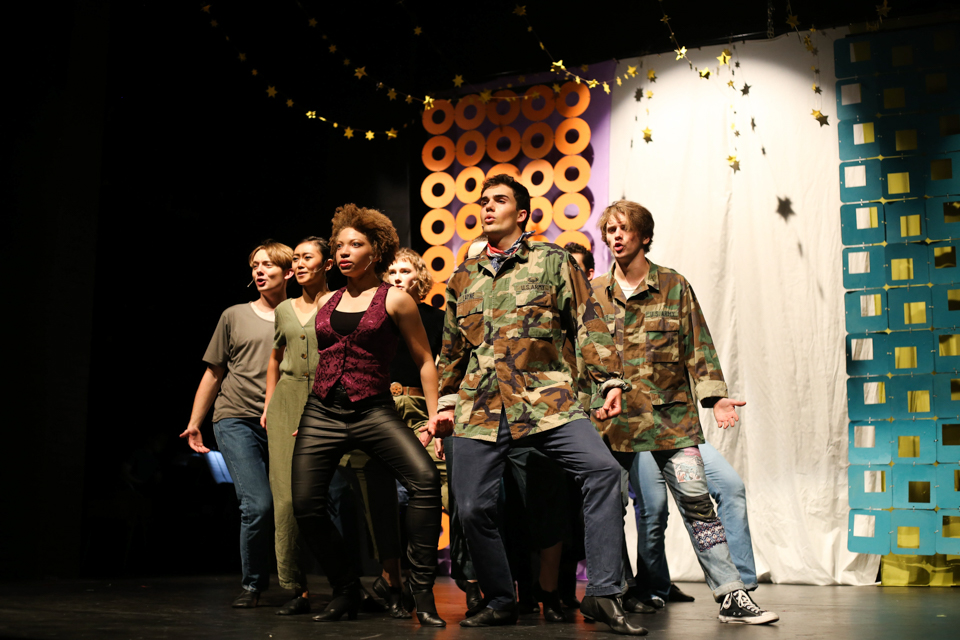 As Pippin made his final exit through the audience, young Theo turned back to the set. Dimmed lights were brought up again as he took center stage, and the experience of finding oneself was poised to begin once again.

The Columbia Musical Theater Society performed “Pippin” from Oct. 24 to 26 at the Minor Latham Playhouse to four sold-out audiences. In addition to strong technical cohesion throughout the production, the cast’s genuine enthusiasm for the show and the opportunity to perform it gave CMTS’s “Pippin” its stand-out qualities.

“Pippin” is famous for its over-the-top choreography and infectious soundtrack. Over its many iterations, several of which have won Tony Awards, the allegorical production has taken on many forms. Director Sophia Houdaigui, BC ’21, was careful to honor the show’s history while making CMTS’s production unique.

Key to bringing this vision into fruition was choreographer Sophie Visscher-Lubinizki, BC/JTS ’21. With the iconic style of Bob Fosse’s original choreography in mind, Visscher-Lubinizki raised the bar for future CMTS productions. Moments of technically impressive ballet and jazz sequences flowed seamlessly into acrobatic lifts and bends in ambitious group numbers like “Magic to Do” and “With You.”

The show follows the journey of a recently graduated son of the medieval King Charlemagne, transplanted by Houdaigui into 1960s America—a rather obvious choice of era given national political and social turmoil at the time. CMTS’s “Pippin” chronicled a young man wandering from Vietnam to free love, counter-culture to suburbia in search of what he called “fulfillment” in life.

Mark Pierce, CC ’20, embodied the titular role effortlessly, fumbling through scene after scene with the audience. Pippin is a relatably flawed character, with an arrogance and ignorance that Pierce managed to balance with sensitivity and undeniable charm. Pierce elicited the sympathy of audience members throughout the show. As Pippin is surrounded by family and peers who have seemingly “figured it all out,” parallels to the college experience became undeniable.

With the audience’s attention and compassion in hand, Pippin matured emotionally and intellectually.

Oftentimes, this maturity was displayed through the physicality brought to each moment on stage. In numbers like “War Is a Science” and “On the Right Track,” Pierce’s ability to develop his character through choreography as well as through posture and gesture was particularly strong. Vocally, “Corner of the Sky” and “Extraordinary” were strengthened by Pierce’s confidence and natural talent.

Helping to navigate Pippin and the audience through the story was the Leading Player, portrayed by Lauren Wilmore, BC ’20. Wilmore’s ability to command the audience’s focus was powerful, supported by impressive vocals and precise movements. The part requires an air of mystery and engagement critical to the progression of the show. Wilmore accomplished this by frequently breaking the fourth wall, offering sidenotes and mischievous glances towards the audience.

Another guiding light in Pippin’s tale was his grandmother Berthe, played by Jackie Chu, BC ’22. With a single song to perform, Chu harnessed exceptional vocal talent and theatrical ability to create one of the show’s best numbers. In addition to its sheer entertainment value, “No Time At All” marked a turning point in Pippin’s path towards fulfillment.

King Charlemagne, played by Armand Procacci, CC ’23, was a frequently over-the-top comedic presence throughout the production. Despite playing the part with a “Gaston”-like arrogance, Procacci reeled in the drama when necessary. King Charlemagne guides Pippin with genuine care, at times providing much needed harsh reminders of the realities of growing up.

Jordynn Lurie, SEAS ’20, played the King’s wife, Fastrada. Often accompanied by Procacci, the two were at their strongest when dancing in numbers like “Magic to Do” and “Finale.” Lurie, who previously competed on “So You Think You Can Dance,” was given a chance to showcase her talents in numbers like “Spread a Little Sunshine.”

By the end of the show, Pippin learns that life is not fulfilled by earning acclaim or acquiring power. In the end, he finds happiness with Catherine, played by Morgan Grant, BC ’22, a widow living in the suburbs with her son Theo, played by Russell Graviet, CC ’23. Grant’s reserved demeanor in the role was a sharp contrast from the sometimes hectic progression of the first act. Pippin’s time living with Catherine brings the story to a domestic end, to the dismay of the Leading Player and her followers.

Unlike the rest of the plot, the ending is calm and poignant. As Pippin lets go of his visions of a grandiose and unattainably extraordinary life, theatrics fade. Props are removed from the stage, musicians fade to silence. Lights dim, and Pippin finds peace singing his last verse unaccompanied.