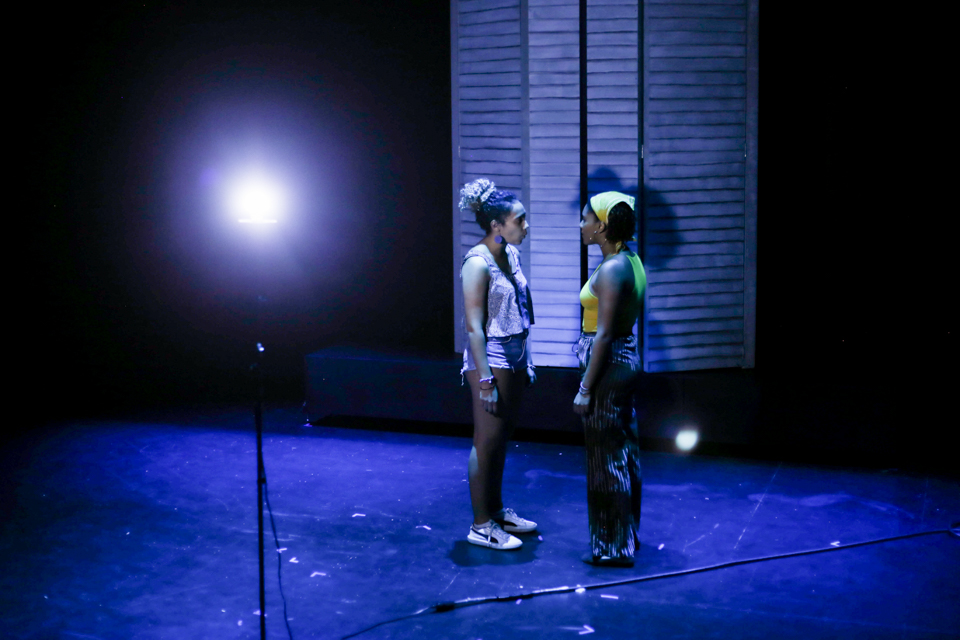 The same scene played out several times, each iteration eerily repetitive to the others yet unique in its execution.

Crew members carefully rotated a platform with a large white door and cream colored walls 180 degrees, opening up the ten-foot structure like a set of blinds.

In this blacked-out interlude, the audience was given a moment to process the previous scene and brace themselves for the next, knowing another fragment of a young black woman’s story was set to be revealed.

New and Original Material Authored and Directed by Students put on four performances of Linguistic Features of AAVE from Thursday, Nov. 7 to Saturday, Nov. 9 at Barnard’s Glicker-Milstein Theatre. The play was written by Kay Kemp, CC ’22, and directed by Madison Hatchett, BC ’22. While the play contained difficult material, each technical transition, movement, and line was thoughtfully composed.

Once opened, the rotating set revealed a bar covered in bottles and blue solo cups. The scene played out several times, each iteration eerily repetitive to the others yet unique in its execution. Zyesha, played by MoniQue Rangell-Onwuegbuzia, CC ’22, was subject to stereotyping and physical abuse, including sexual assault, by a series of young white peers (all given the name Percy), offering to accompany a drunk Zyesha home.

The repeated scene would start with the offering of a drink to Zyesha, and would end in the Percy escorting the intoxicated woman back to her room. In between, the Percy would aggressively flirt, dismissing Zyesha’s unwillingness to accept a drink from a stranger, or her discomfort at unwanted comments targeted at her name.

“I love black women!” the Percys would say in defense, sensing Zyesha’s unease.

The audience, knowing the assault was to follow with each repeated scene, watched as the men would cover Zyesha’s mouth, cooing, “I know what you need” as the lights dimmed.

Between each of these incidents, Zyesha’s sisters Xemena, played by Mia Flowers, BC ’23, and Yakini, played by Eva Tesfaye, CC ’20, reflected on their sister’s experience through echoed monologues and direct statements made to each other and the audience. These moments of reflection, utilizing direct and forceful statements to articulate the effects of the assault, were poignant, powerful, and painful. They helped elevate the narrative, pulling and pushing it into and out of reality, and into and out of dreamland.

The scenes that featured all three sisters together were vibrant and dynamic, and joy could be felt in each word. Although these scenes appeared disconnected, they served as flickers of love and support on an otherwise lonely stage. The quality of these scenes was reflected in the rest of the play, too: a synergistic collaboration between writing, directing, lights, sounds, design, and delivery.

This melding of talents was seen especially in the sisters’ interlude, an introspective dialogue between the two as they sat back to back. A color-changing lightbulb, glowing above the two, hypnotized the audience, forcing them to sit with the plot. As the light flickered out, a bird-song was played softly.

In addition to the dual-purpose and structurally intricate piece anchoring upstage, many props were brought on and off the stage between scenes. In one scene, the stage was turned from a college party to the interior of a museum gallery—Fireball and Solo cups replaced with a golden frame lowered from the ceiling. Lighting played a crucial role in moving the play from scene to scene as well, turning a brightly lit home dining table to a fading memory by mimicking an underwater environment.

In her leading role, Rangell-Onwuegbuzia underwent an arc of pain, confusion, and anger. Her character was instantly established as being full of intelligence and wit, slowly pushed down and challenged by the oppression she faces.

Rangell-Onwuegbuzia brought out every subtlety in Kemp’s script and harnessed energy and meaning behind dramatic moments like in the play’s final scene, during which Zyesha violently throws a stereo across the stage while letting out a blood-curdling scream.

This startling release of boiling anger—built up throughout the preceding hour—punctuated the end of the play with an unsettling and tragic ambiguity.