MFA’s “In The Blood” tackles homelessness and poverty in New York, hurling piles of garbage and giant “SLUT” banner

MFA’s “In The Blood” tackles homelessness and poverty in New York, hurling piles of garbage and giant “SLUT” banner 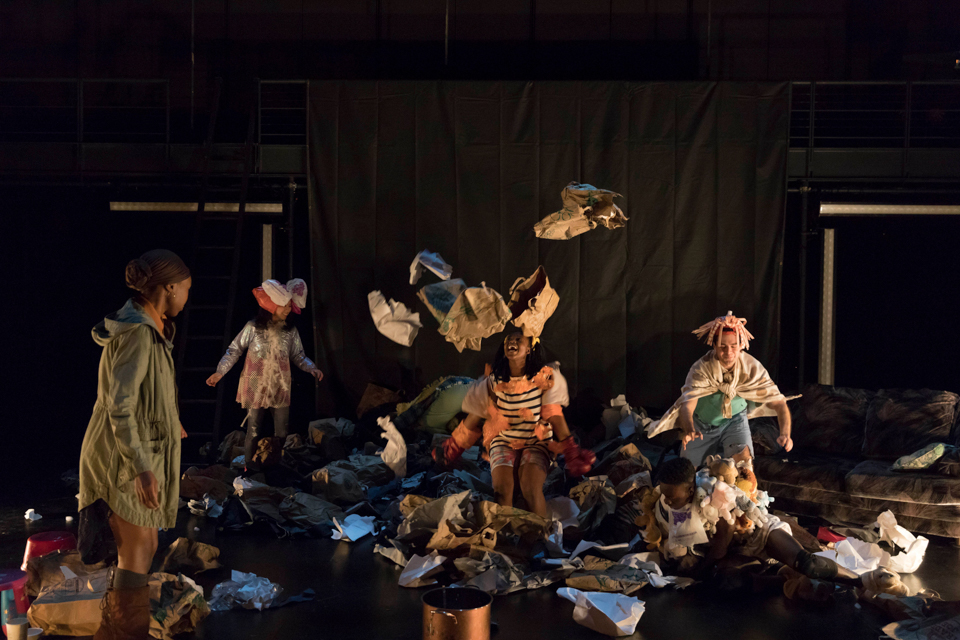 Garbage collected from Columbia falls on top of Hester and her baby.

“I don’t think the world likes women very much.”

Hester, an African-American woman with five children facing homelessness, illiteracy, and poverty, reflects on a society that has tossed her and her family aside.

Columbia School of the Arts presented the class of 2020 MFA acting thesis production “In the Blood” from Wednesday to Saturday in the Lenfest Center for the Arts. The MFA class of 2020 cast includes Owala Maima, Hal Miers, Anthony Othello Prat Jr., Jon Robin, Tenneh Sillah, and Yeena Sung. Written by Pulitzer Prize-winner Suzan-Lori Parks and directed by Drama Desk-nominated composer Eugene Ma, “In the Blood” tells a modern-day story set in New York City in the hope of awakening audiences to the social outcasting of homeless single mothers and their children.

“Our team does not shy away from acknowledging our possibly distant relationship to the harsher realities of the worst of oppression, continual abuse, desperate perseverance, and extreme poverty,” Ma wrote in his director’s note. “Our privilege entangles us in the same system that Hester—and many like her—must constantly traverse in order to survive.”

The production begins its chaotic course by introducing Hester with intense strobe lights and a loud bang, while a giant banner with the word “SLUT” is revealed and piles of garbage fall on her. This introduction sets the tone of the play, revealing the recurring themes of misogyny and slut-shaming. As Hester loses her baby in the heaps of garbage within the first five minutes of the production, the audience becomes familiar with Hester’s struggles early on in the play. 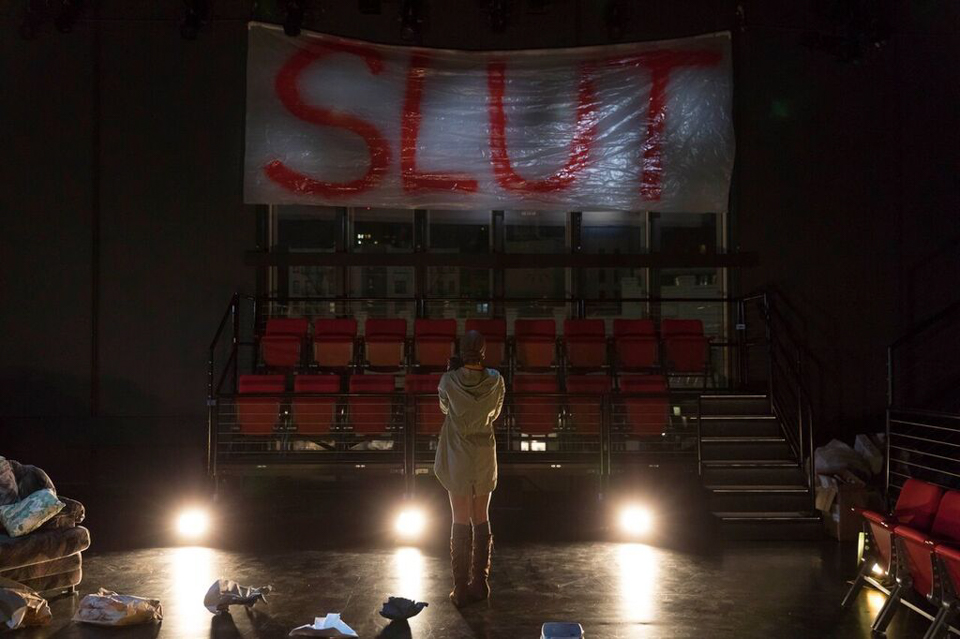 Heidi Bohnenkamp
Derogatory speech aimed towards Hester hangs on a banner above the audience.

“We collected actual garbage from Columbia’s campus and threw it all in there—a bunch of Sweetgreen bags and other random junk, in order to show the manic reality of Hester’s situation as a homeless woman in NYC,” Ma said.

Shortly after the opening scene, we meet Hester’s five “bastard children” as they are called: Jabber, Bully, Trouble, Beauty, and Baby. As each child is introduced, running amok and fooling around in the garbage-filled street under the bridge where they reside, the chaotic energy of the play continues.

In order to truly portray the level of comfort between members of a family and embody the foolishness of toddlers, Ma spent time teaching the actors theatre clowning, a method of improv meant to emphasize character and relationships. The play also includes nudity and the insinuation of sexual acts, which actors practiced with an intimacy coach.

“The actors spent a lot of time getting completely comfortable with each other, and although they have limits to stay within, we allow for a certain level of improvisation in each show,” Ma said. “They never fail to surprise me.”

Hester’s relationship with her children explores the duality of motherhood. We see the family’s love for each other in certain scenes, such as their story-time before bed or Hester’s purchase of new shoes for all her children. At other times, we see Hester’s exhaustion and frustration get the best of her—which eventually leads her to kill one of her children by the end of the play. The emotion-packed final scene shows Hester drawing the letter “A”, the only letter of the alphabet Hester has ever learned, on the ground, with her child’s blood—an overt reference to the Scarlet Letter.

A mother killing her child is an atrocious act of evil. But what we see of Hester’s life throughout the play demonstrates how society is not free of blame. Hester had been manipulated and abused by those around her: an ex-boyfriend, a neighborhood prostitute, a reverend, a doctor, and a welfare employee. All of these characters, we come to realize through personal confessions, have taken advantage of Hester sexually and emotionally, and had a damaging impact on her psyche.

Yet, Ma made clear he did not want these characters to be seen as villains, but rather as complex humans who audience members could relate to and understand.

“Most of these characters also tried to help Hester, and while they are more privileged than her, they are still not in high positions of power,” Ma said. “Everyone is trying to figure out their own lives and may act unethically or selfishly along the way, but that is the price we pay in a system that is structured as such.” 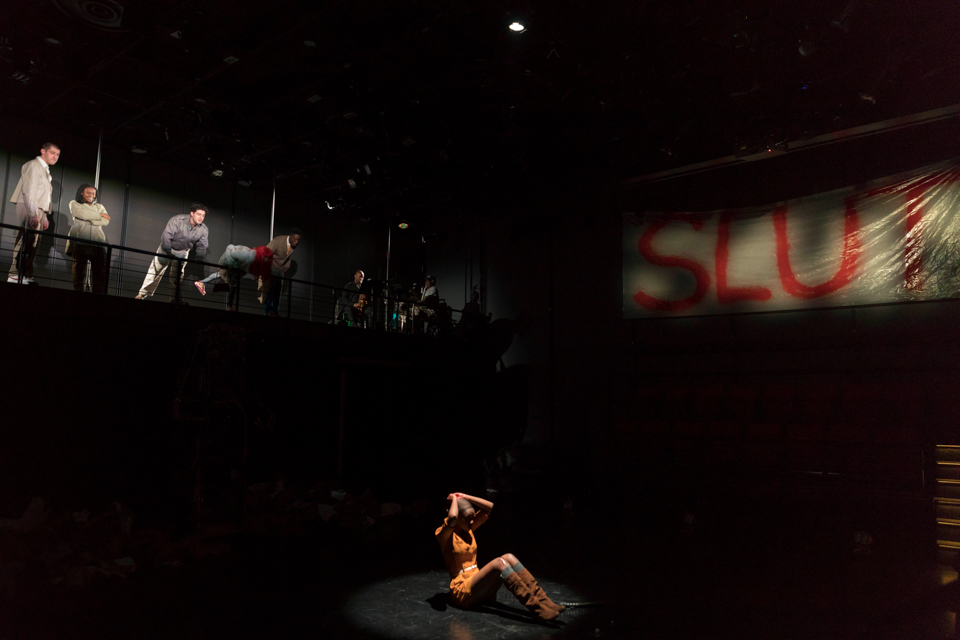 Heidi Bohnenkamp
Townspeople scream obscenities at Hester after she has killed her firstborn child, Jabber.