Behind the curtain at Bacchanal’s Closet Concert series

Behind the curtain at Bacchanal’s Closet Concert series 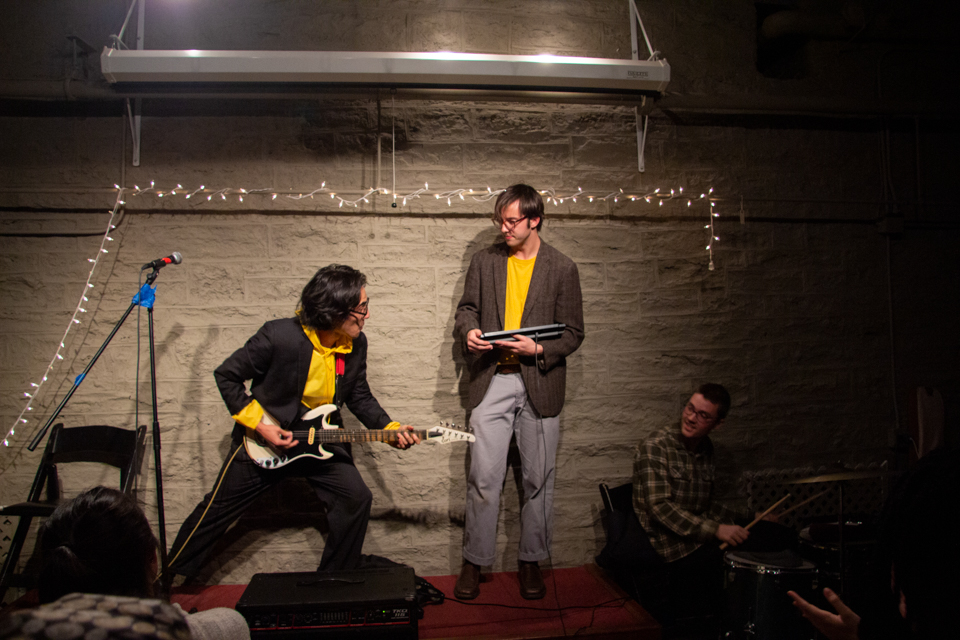 Musicians from across New York joined the secret lineup at Postscrypt.

Most students may only think of Bacchanal when reminiscing on Columbia’s biggest outdoor party each spring. This year, the Bacchanal Committee is making plans to change that.

On Thursday, Nov. 14, the Bacchanal Committee launched the first show in its new Closet Concert series. The event showcased an eclectic mix of four musical acts to a select audience gathered in Postcrypt Coffeehouse. Low-hanging string lights framed the performers, casting a soft glow as their sounds filled the compact room.

As a ticketed but free event, the Bacchanal Committee sought to create an intimate environment through restricting the audience size for the Closet Concert series.

With musical styles ranging from soft indie pop to pure hip-hop production, the show provided something for everyone able to get their hands on a ticket—performers included singer-songwriter Limey (in her debut performance at Columbia), music producer Amiri, boy band Comics Club, and singer-bassist Miiv.

With such a wide range of genres present, the energy of the audience was in flux from artist to artist. In one minute, fans could be seen bobbing their heads to the soulful samples of Amiri’s lush beats, and in the next, they would be headbanging to Comics Club’s driving drums and energetic stage presence.

The Closet Concert series is not the first underground music performance platform to feature cozy environments. It comes hot on the heels of a growing list of intimate concerts across campus, including CU Records: Unplugged and last year’s Not So Tiny Desk Concert.

The show was conceived by the Bacchanal Committee’s Party Committee in conjunction with Bacchanal co-Presidents Joy Barrett, BC ’20, and Emma Schechter, SEAS ’20, as well as Bacchanal Tech Chair Matthewos Kassaye, CC ’22. The show developed as one of several Committee ideas aimed at engaging the student body year round.

“Last year’s president, Vanessa Chadehumbe, [CC ’19], she came up with this idea—Bacchanal at Black Box,” Schechter said, “which was supposed to be us bringing in artists and interviewing them in Lerner Black Box.”

The board decided that the idea was quite ambitious, so it decided to scale back the concept and ground its event in the student body.

“We wanted something really small and really intimate, and so that’s how we got to Closet Concerts. [We wanted to] start with student talent and then bring in local talent,” Barrett said.

The Bacchanal Committee reached beyond campus to fill out the Closet Concert’s lineup. While Limey and Amiri are Barnard and Columbia students respectively, Comics Club is a Queens-based boy band, and singer-bassist Miiv hails from New York University.

The Closet Concert series also boasts the title of the first concert series to feature a lineup that remains secret until the event itself. Barrett and Schechter were seeking to introduce audience members to new music through the lineup’s secrecy.

“We wanted people to come in with an open mind,” Barrett said. “We are very quick to form judgements about different genres and artists under the assumption that we’re not going to like it. However, what we listen to on Apple Music and Spotify is going to be different than what we hear live.”

Barrett and Schechter credit the Bacchanal Committee for fostering their musical curiosity. With the array of musical tastes of the group’s general body, they said, it was easy to keep an open mind.

“I’ve learned a lot more about pop and rap [since joining Bacchanal Committee],” Schechter said, “I’ve always been into psych rock more. I like Bacchanal because you can suggest anything, and people will be like, ‘Cool, I’ll check it out!’”

Ultimately, through the Closet Concert series, Barrett and Schechter wanted to provide yet another avenue for musicians to share their work with the student body.