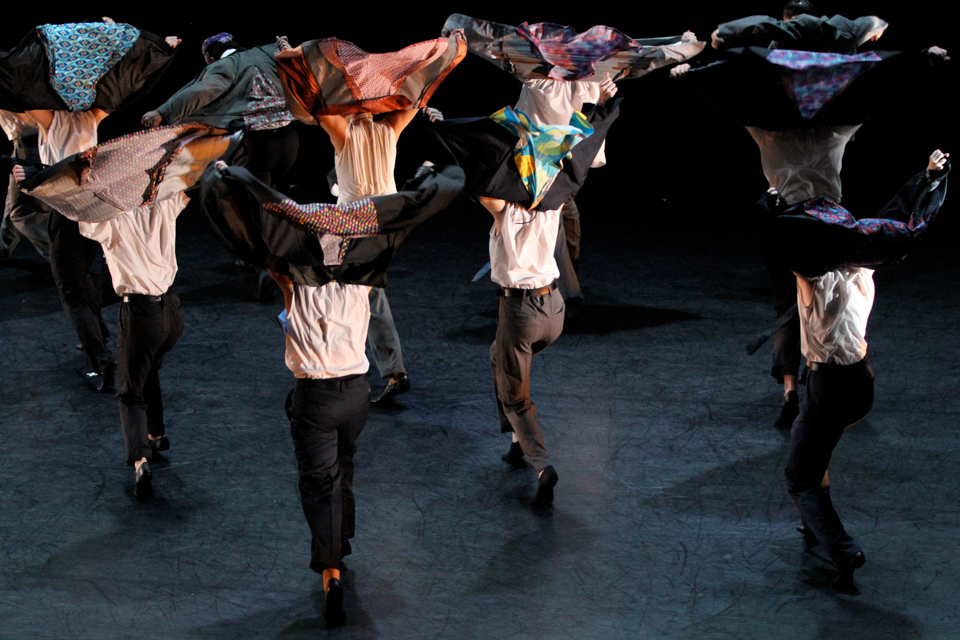 Pictured is choreographer Earl Mosley's “I See You", performed with members of Earl Mosley’s New York-based Diversity of Dance company, which lit up the stage accented with dancers clad in crisp suits.

As spectral notes floated over the audience, a group sitting stage right was focused on the two dancers across from them. The arching back of one dancer was draped over another who pulled both bodies across the stage.

Founded in 2007, CBC stands out among the University’s ballet groups because of its unique interactions with New York-based professional choreographers. This semester, CBC showcased five new pieces and one restaging at the showcase.

New York City Ballet’s Corps de Ballet member Emily Kikta debuted her new dance “Waiting in the Rain for Snow.” The piece was composed of a number of solo and group sequences that showcased the dynamic relationship between the dancers onstage. Instrumental music drifted between piano, wind, and string crescendos, creating a wonderful backdrop for the varied but upbeat choreography.

John Selya’s “Off the Record” began with a young woman putting on a classical record. As she began to move to the music, she was joined onstage by two dancers who moved alongside her, although separately, in a dreamlike scene. Although their styles seemed incongruent at first, as the couple performed classical ballet while the young woman created organic and modern gestures, their movements become more intertwined throughout the dance. When a second young woman switched the record, the mood shifted again with the upbeat notes of Lionel Riche’s “Running With the Night.”

A group of laughing and chattering dancers entered the stage casually for “Afterlives, or a History of Light Part 2” by Emily Coates. The stage quickly changed again with a haunting synthesized pulsating soundtrack. The choreography shifted between smooth and fairy-like lightness to stronger, more tense moments.

“Impossible Mirror,” choreographed by Eve Jacobs, was performed in two movements: the first to Joni Mitchell’s “Twisted” and the second to “Chopinesque,” a jazz-infused riff on classical pianist Chopin’s compositions. The ensemble performed sequences in pairs, mirroring each other's movements before they wove back into the larger group. At one point, the dancers huddled together before unraveling, hand in hand, into a visually intriguing chain of coordinated motions.

The final dance was a restaging of Fredrick Earl Mosley’s “I See You.” CBC collaborated and performed with members of the Earl Mosley’s New York-based Diversity of Dance company. Their lively and technically impressive choreography was accompanied by the song “Beat Box” by The Art of Noise, which made the group, with its brightly accented suits and ties, look even more dramatic.

In addition to the five professionally choreographed dances, there was one piece from CBC’s Choreographer Mentorship Program. Every season, the program, which started in 2018, pairs one student with a professional choreographer to create their own original work.

This fall, Sarah Yasmine Marazzi-Sassoon, BC ’22, created her dance “on the last day” with the help of previous CBC choreographer Claudia Schreier. The dance used four different pieces of music, including a variety of rhythmless tracks, which stood in stark contrast to the more traditional ballet movements of the other professionally choreographed pieces.

CBC’s fall performances demonstrated a great deal of artistic and technical talent with the support of established and up-and-coming professionals. As some of Columbia’s most impressive performers, the dancers elevated each other to produce a remarkable collection of work.