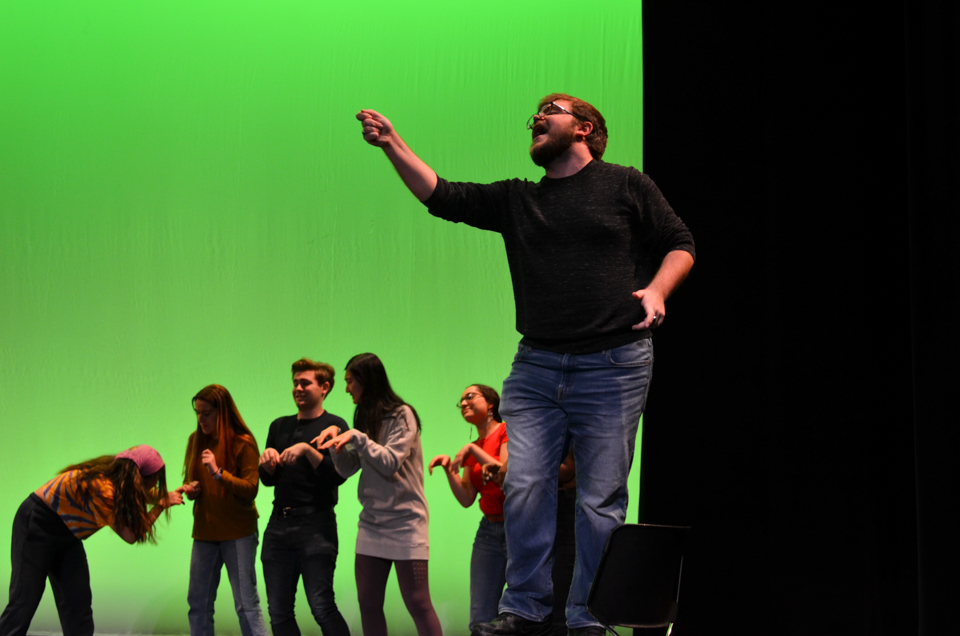 The comedic holiday performance will kick off reading week with music and laughs.

XMAS!14 brings to light what many of us have known all along: Santa is obsessed with sex, and Jack Frost is depressed.

The [how many have there been?] version of an annual student-written comedy musical spectacular, “XMAS!14: A Production by Santa LLC,” will kick off reading week with some holiday cheer. This year’s production has been run under the leadership of director Jess Skinner, BC ’22, producer Nakiri Gallagher-Cave, CC ’21, and stage manager Iris Rosenblum-Sellers, CC ’22.

As flowers bloom and summer break comes into view each spring, students pitch their ideas for the upcoming XMAS! season. After being selected as writers in June, co-writers Lily Parker, BC ’22 and Raefah Wahid, BC ’20, met weekly to workshop ideas and come up with a final script. Not all of their ideas made it through the process.

“At first there were robots involved,” Wahid said. “There were serious questions about the ethics of artificial intelligence … one of our protagonists was going to die from radioactive poisoning.”

For better or for worse, this upcoming Monday will feature no radioactive deaths or robotic dance numbers. Instead, a collection of holiday misfits will find themselves together at the North Pole, each bringing with them emotional baggage to be unpacked through song and dance.

Among those misfits are Santa, a couple of elves, a midwestern boy named Maximillion Williams, Jack Frost, Blitzen the Brooklyn-ite reindeer, and a domineering ice fisherman.

And what would the holidays be without some musical accompaniment? Co-composers Nicolas Duran, CC ’21 and Alex Maddon,CC ’21, lyricist Maura Ward, BC ’21, and choreographer Ravelle Dundon, BC ’22, worked together to create a collection of comical numbers for the show.

Take, for example, Santa, played by Christian Rene Palomares, CC ’22, singing about his visit to Woodstock 1999. In a serenade to Maximillian, played by John Kershner, CC ’22, Santa details the rather wild time he had at the disastrous event. Accompanying Santa in his song are two dancing sperm who wiggle and gyrate alongside jolly ol’ Saint Nick.

The second act of XMAS!14 features Jack Frost, played by Camilla Cox, CC ’22. Frost is blue, feeling underappreciated for her freezing abilities. Slouched over in a large white chair, she complains and snaps at her minions as they fetch her chicken nuggets and turn on TV reruns. She is visited by an elf named Chickpea, Jackie Chu, BC ’22, and Blitzen, Alyssa Mena, CC ’22, who plead with her to confess to the growing number of elves found frozen at the North Pole.

XMAS! has gained a reputation as an accessible entrypoint to comedy and acting. For many production members, this is exactly what got them involved.

“For me at least, XMAS! is for everyone … there’s no experience necessary for writing the show or being a part of the show,” Wahid said. “If you want to dive into theater this is the best way to do it.”

XMAS!14 is not lacking in musical or theatrical prowess, though. Cox’s vocals are fantastic in her melancholy solo as are Chu’s and Palomares’. Ensemble numbers include all the lifts, kicks, and frills one would expect and are made all the more impressive for being student creations.

“It’s the best way to celebrate the end of classes,” Parker said. “What are you going to do, study for exams? No. You’re going to want to see Santa dancing with some sperm. It’s going to be fun!”

Correction: A previous version of this article did not mention one of the composers, and had some spelling and a date error.