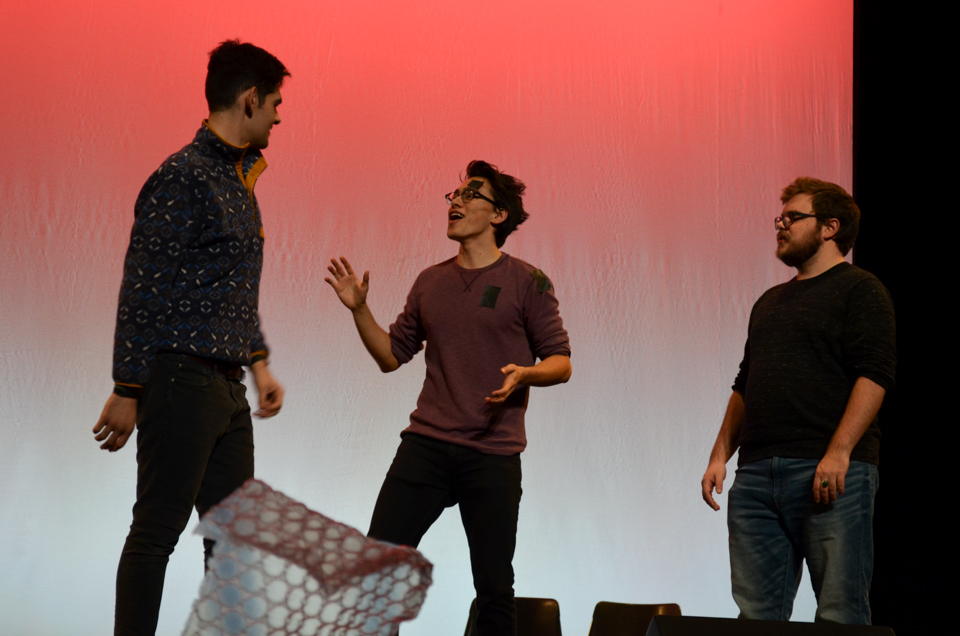 The annual holiday spectacular was plagued by ho-ho-horrendous technical issues.

In 2018, the first line of Spectator’s XMAS!13 review read, “This year Santa Claus is retiring. Microphone substituted for candy cane, the announcement came moments into the show.”

This year, the microphones must have literally been substituted for candy canes. In XMAS!14, the tech was a rebel without a Claus.

On Dec. 9, XMAS! put on “Santa Presents XMAS!14: A Production by Santa LLC.” The musical was written by Lily Parker, BC ’22, and Raefah Wahid, BC ’20; directed by Jessica Skinner, BC ’22; and produced by Nakiri Gallagher-Cave, CC ’21. The score was co-composed by Nicolas Duran, CC ’21, and Alex Maddon, CC ’21, and the lyrics were written by Maura Ward, BC ’21. Technical glitches presented the cast with an infuriating task, but the annual musical went on with enjoyable moments here and there.

Before pining over the problems, the more spirited moments of the secular holiday spectacular should not be fir-gotten.

Camilla Cox, CC ’22, as Jack Frost, dove into moments of melancholy and existential despair with hilarious melodrama, offering bad-will to all men. Christian Palomares, CC ’22, as a narcissistic Santa, clenched his jaw tight enough to send glory to the newborn King. Angela Zhang, CC ’22, as a character simply named MG, danced her way through the winter wonderland with elegant pirouettes and gingerly arm flutters.

In addition to these standout performers, the jingling ensem-bell—composed of elves, reindeer, Bartholomionions, and sperm—rocked around the Christmas stage, as Joseph Kurtz, SEAS ’21, sleighed a magical backflip.

However, the rocking around stops here as Scrooge takes the reins.

Innumerable times in the production, the microphones cut out. It happening once or twice could have been fir-given, but cutting out cold turkey throughout a musical is ho-ho-horrendous.

During the duet number “Only Santa,” sung by Jackie Chu, BC ’22, and John Kershner, CC ’22, not a Who down in Whoville could be stirred by Chu, and the Grinch stole Kershner’s microphone completely. When Santa gushed about his “One Crazy Weekend at Woodstock,” his ravings turned into meandering mutterings about something to do with 1999.

In addition to microphones fa-la-lying away, ear-screeching blips and random cracklings haunted the performers throughout. Punchlines—if there were any—were silenced by speakers unable to catch the consonants at the end of the performers’ sentences. Even after the last word of the final number, “You and Me,” a harrowing shriek concluded the performance.

Apart from dreadful technical problems, the musical’s narrative was winding and the story flopped around trying to wrap up loose ends. Was the focus of the musical a boy trying to find his father? Was it Santa’s theme park? Was it frozen elves? Even still, how did the solo ballet recital before the final number make any sense? The narrative begged for a direction, but the various storylines simply scratched the surface of an idea and moved on.

While the script was s(no)w masterpiece and the technical glitches were pit-elf-full, the cast members of XMAS!14 gave all the Christmas spirit they could to fight the icicles crashing down on them. But due to the technical glitches and wayward narrative, Roone Arledge Auditorium really was a bleak midwinter for two hours.

Editor’s Note: Arts & Entertainment Editor Abby Rooney was part of the cast of XMAS!13. She was not involved in XMAS!14 or in the writing or editing of this article.