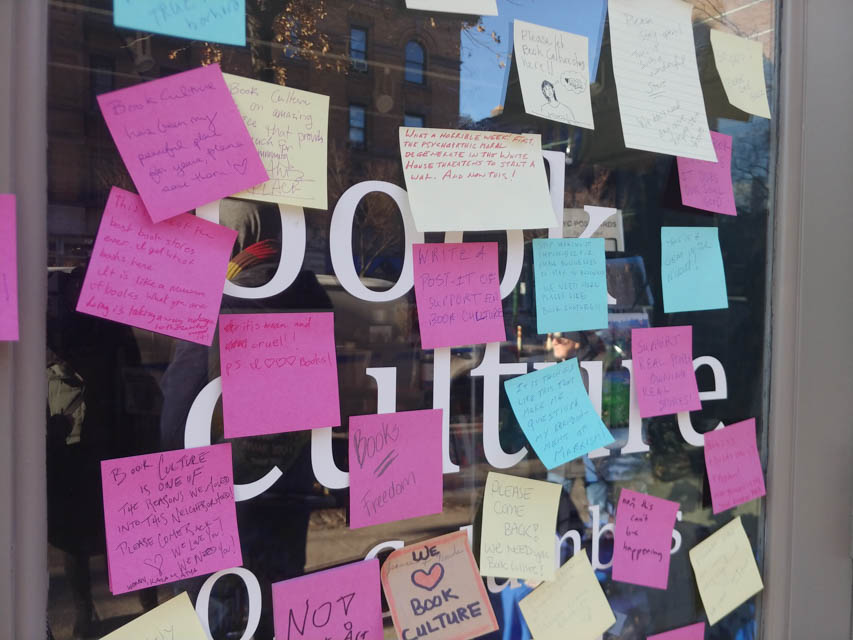 Members of the community were invited to write messages on Post-it notes to show support for Book Culture amid a period of financial uncertainty.

Community members, customers, and staff gathered on Jan. 9 for a rally outside of Book Culture on Columbus, which closed on Tuesday after it was seized by its landlord, Walker, Malloy & Company. Members of the community were invited to write messages on Post-it notes to show support for Book Culture amid a period of financial uncertainty.

In an interview with Spectator, Book Culture owner Chris Doeblin said that the rally was intended to “indicate to our landlords and our city officials that we’re a meaningful business and we deserve a shot.”

Walker Malloy was not available for comment at the time of publication.

This summer, Book Culture fell three and a half months behind on its rent before seeking city and state funding. Walker Malloy allowed the business to keep its doors open until this week, when it locked the doors and requested the full amount of outstanding rent, according to Doeblin. Until this payment is made, the Columbus store will remain closed.

“I am asking [the landlord] to come and open the store now and give us a chance to recover and earn money,” Doeblin said. “We can’t obviously dig ourselves out with a closed store and all of our stuff inside. I’ve got a staff; they’ve got jobs. They need to work.”

“We want to come to work and talk to people about books and give people books and show them new authors that they might not know about,” Southurst said. “We have the other stores, there might be a chance that some positions can be found, but I can’t guarantee anything and that’s a really horrible position to be in.”

Even if the Columbus store is only closed temporarily, some employees indicated that their livelihoods might be significantly affected.

“A lot of us are working paycheck to paycheck, and we really hope this can be resolved quickly so we can get back to work and get back to serving the community and paying our bills,” said bookseller Emily Neiss-Moe.

In the past, Doeblin has faced accusations of denying pay and healthcare benefits to employees, and he has clashed with the workers’ union. In 2014, employees went on strike and some patrons boycotted Book Culture. The disputes were resolved, and Book Culture has since reclaimed its status as a beloved neighborhood spot.

According to Doeblin, small businesses like his have struggled to survive throughout the last decade. He emphasized that “small businesses are just being run over … by gigantic corporations and developers and people with money and people that have inherited wealth.”

James Webster, an employee at the 112th Street location, also noted that “what’s been going on over the past few months is the same thing you see with a lot of small businesses in the age of Amazon; it’s just hard to compete with the global megacorporation.”

According to some locals, Book Culture plays a major role in the daily lives of many Upper West Side residents. Hope Reiner, an Upper West Side resident and member of a book club at Book Culture, said that the bookstore “is a place to connect with your neighbors, it's a place to listen to other authors talk about their books, it's a warm, caring, place. And without it, it's a huge loss to the neighborhood. … I love coming here. It's a bright spot in my day.”

Upper West Side resident Mark Gisler noted that the Upper West Side is “losing stores left and right that are not big box retailers,” which reduces the “character and charm” of the neighborhood.

Webster said that Book Culture has become much more than just a bookstore. “We host things like storytimes for nannies who are watching kids while parents are at work, who just come here when they have nowhere else to go,” he said. According to Southurst, Book Culture is “here to serve the families, the children, the dogs, [and] our customers” and develop a strong sense of community.

To Neiss-Moe, Book Culture’s value expands beyond the local. “Books are what keeps us informed, what keeps us entertained in a world that can sometimes be pretty dark, so keeping this store in this community is not just a service to the community … but really to society as a whole,” said Neiss-Moe.

For now, the Post-it note-covered windows of Book Culture on Columbus indicate the local book chain’s hardship and the community’s hope.