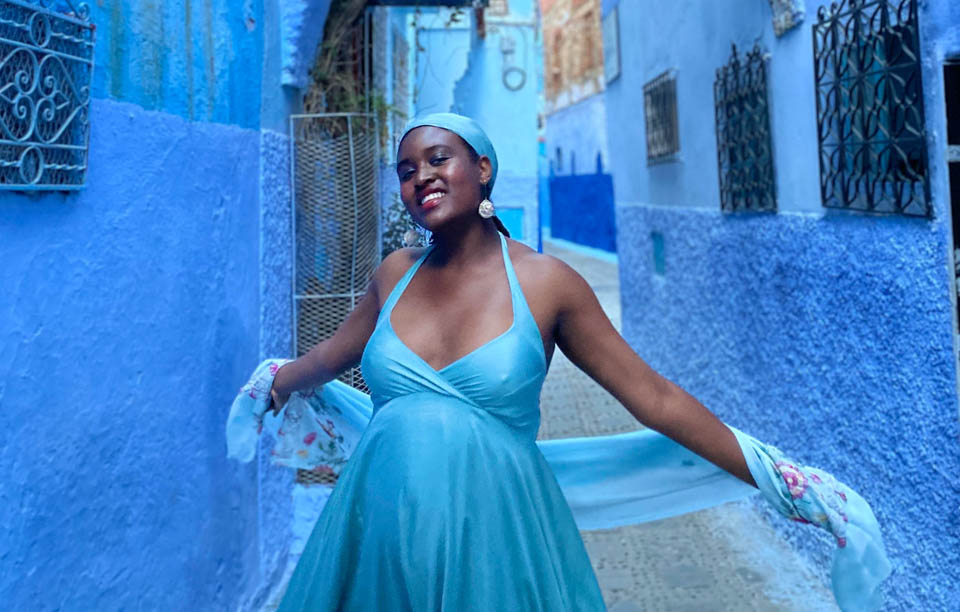 Playwright Phanésia Pharel, BC ’21, is currently completing a virtual residency at the Echo Theater Company in Los Angeles, where she began developing her newest work, “Black Girl Joy,” last May.

At 15 years old, Phanésia Pharel, BC ’21, marched into the lighting booth of her high school’s black box theater and locked the door behind her. By the time she stood up and walked out, she had written her first play. The following year, she was a published playwright.

Growing up in Miami, Florida, Pharel competed with her school theater troupe at the annual International Thespian Festival in Lincoln, Nebraska. After trying out acting and directing, Pharel still found herself searching for a way to share her voice. Her turn to playwriting felt inevitable.

“It really felt like things out of my control were pushing me to write a play,” she said.

Pharel wrote her first play “Penelope” in what she described as a “fever dream.” Set in “Yankeedom,” the play follows a young Black woman as she navigates circus training. Based on the experiences of one of her closest friends, “Penelope” is an allegorical tale of how the American public education system fails Black students. After winning the Playworks competition at the International Thespian Festival, it was selected as one of four plays in the nation to be workshopped by the festival.

From that point forward, Pharel wrote whenever and wherever she could. By the time she graduated high school, her work was published in the Samuel French catalog, Dramatics Magazine, and in the City Theatre Anthology, as well as performed at the Micro Theater Miami, where her play “Shovel Me Away” received the “Best Of The Best 2016” award.

“Once I knew how to write plays, I was on a high because I loved it. We would always go to Disney or Universal right after [Thespian Society]. I was in line at Disney World, editing my plays on paper, just being like, ‘Well, we’re in line. I might as well!”’ Pharel said.

Pharel’s work is filled with poetry and magical realism. She draws inspiration from Ntozake Shange, Suzan-Lori Parks, Edwidge Danticat, and from the Caribbean literature her mother shared with her as a child. Her works deal with grief and trauma, past, present, and looming. Set in the near future, one of her most recent plays, “And Other Dreams We Had,” is a beautifully-distilled portrait of a young couple in the wake of an environmental disaster.

When describing her writing process, Pharel emphasized that the key to a play often lies in its beginning.

“I think that incubation space, when you’re first starting a play, that is the most precious time. And most of the starts of my plays never change,” Pharel said. “I would say the first 10 pages, at least, of every play I’ve written are from the first draft. I think those are really raw and then form the entire piece.”

Pharel said that she was excited to come to New York after her acceptance to Barnard, where she imagined meeting her favorite writers and working on her own plays. While this dream came true, Pharel said it did not happen at Barnard, where the racism she experienced in the theater community began to affect her writing.

“Part of the reason why there’s only one Black girl in my class who’s graduating from theater is because of how racist the theater department was. I was going to be a theater major—I dropped. I didn’t feel heard and I felt like I was going to start hating the craft of theater,” Pharel said. “That happened to me before with singing, and I didn’t want that to happen with writing.”

At the start of her sophomore year, Pharel was the dramaturg for the Columbia University Players' production of "The Great Gatsby,'' where she advised on issues of colorism within the play. The following spring, the play’s director, Nick Hermesman, CC ’19, wrote an op-ed calling for greater inclusivity in theater on campus. Pharel pinpoints his article as the moment people started paying attention.

“Before that, nobody cared. I suffered for two years on this campus. I suffered with literally every theater group other than NOMADS and Black Theatre Ensemble. Those are the only spaces where I had a good experience.”

According to Pharel, the Barnard theater department has yet to reckon with the racism that underlies the lack of representation within its community. She explained that inclusivity is not a matter of simply casting more people of color, but rather involves actively uplifting Black voices.

“Putting people of color in your groups to feel less racist isn’t even enough. You need to support Black Theatre Ensemble and give them resources,” she said.

Setting her sights off campus, Pharel ultimately submitted her work to theater companies around New York City. She found the community she lacked on campus at New York Stage and Film, where she is now an artist-in-residence.

“When I went to New York Stage and Film, I was able to be around all different types of people that celebrated and embraced my voice and uplifted me. I was able to find my tribe in the way that white students at Columbia automatically are able to,” she said.

Pharel is currently completing a virtual residency at the Echo Theater Company in Los Angeles, where she began developing her newest work, “Black Girl Joy,” last May. Set in and around the fictional Black Girl Joy Center for Vulnerable Youth, it tells the story of five young girls grieving the death of one of their friends.

In terms of her upcoming work, Pharel explained the importance of highlighting the treatment of Black women and reckoning with anti-Blackness in all its forms amid nationwide protests demanding justice for the victims of anti-Black violence.

For Pharel, writing is a practice of hope and healing. She reflected on how her plays give her space to process grief and loss while also creating a wider space for healing within her community.

“I live in a world [where] every day something tries to kill me—and it doesn’t. White supremacy tries to kill women like me every single day. I can be sleeping in my bed like Breonna Taylor, and someone can come into my house and shoot me. So if I’m going to do something, it has to make room. It has to free something. It has to heal something,” Pharel said.