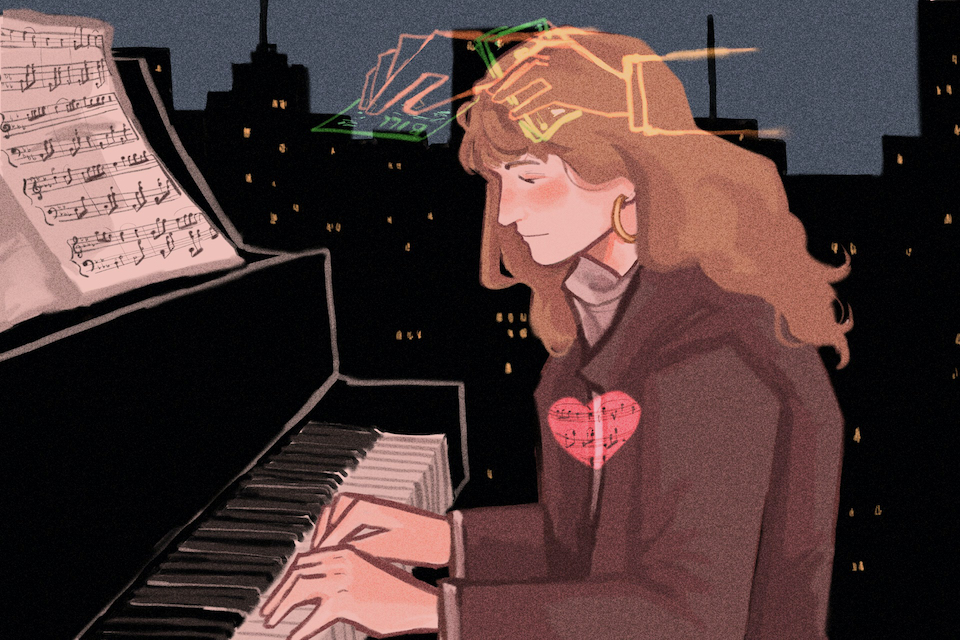 With limited government assistance and few performance opportunities, musicians living in New York City have had to make difficult decisions about how to continue their careers.

A small piece of Astroturf was all it took for Richard Agudelo to transform Terremoto Coffee into a jazz venue. By moving tables to the sidewalk, he was able to open up space for a drum set, other instruments, and a camera setup. Inspired by other eateries, Agudelo wanted to give back to the New York City music community, which has been hit hard by the COVID-19 pandemic.

“Musicians suffer the most. And anytime there’s been a tragedy around the world … the first people to say, ‘We’ll be there’ are musicians,” he said.

With the help of musicians who donated gear and agreed to play, the Lower East Side coffee joint has hosted live music events almost every weekend since New York City’s July reopening. The shop’s revenue has even started to compete with pre-pandemic numbers.

But many in the live music community have not been able to make a living wage, let alone compete during the pandemic. A survey conducted by Americans for the Arts reports that in New York State, arts organizations have taken a financial hit of $300 million, with over 31,000 layoffs. In Harlem, several venues canceled weeks' worth of gigs at the beginning of the pandemic. Some, like the Apollo Theater, remain closed, while others like Silvana and Shrine recently started hosting live performances again.

For venues choosing to reopen, government restrictions may limit their profit. According to New York State guidelines, businesses serving alcohol cannot promote or charge ticket prices for live music, stating that “music should be incidental to the dining experience and not the draw itself.” When an upstate bar won a lawsuit against the State Liquor Authority, the SLA appealed the court decision, with officials defending the guideline as an attempt to limit crowds. But according to trumpet player Benny Benack III, a freelancer who often plays in Morningside Heights, restrictions like these prevent the live music industry from bouncing back from the effects of the pandemic as quickly as other industries have.

“You can go sit inside a gym with no windows and sweat five from each other for an hour, but you’re not allowed to have a concert on a rooftop outdoors with social distancing and occupancy limited because you’re charging a ticket price,” Benack said.

Another criticism of the government response to the pandemic arose when individuals applied for state assistance. Since many freelance musicians file taxes differently than other professionals, it is difficult for them to access unemployment benefits. Instead, many musicians have turned to private grants as an alternative for financial relief. Yvonne Sewall-Ruskin, CEO of Max’s Kansas City Project, a Queens-based emergency grant for artists, said that grant applications have increased significantly during the pandemic.

“We were inundated with applications from freelancers who were really in dire straits,” she said. “We have basically exhausted our funding quite quickly, unfortunately, because we’re small.”

Though grants are limited, they are a much-needed temporary source of relief.

“For us to have some resources through these grant fundings that are specifically for artists—it is a blessing. Whether it’s enough, you know, is hard to say,” jazz pianist Ben Rosenblum, CC/Juilliard ’16, said.

Facing limited live performance opportunities and a lack of government assistance, some musicians have left the city or the music world entirely. For those remaining, live streaming performances and online teaching have served as viable ways to stay afloat.

“[Online teaching is] more tangible than being able to feel that live concert effect through video,” Sein An, CC/Juilliard ’20, said. “So, teaching through video, I would say, is more feasible than earning income by hosting events live on Zoom.”

Prior to the pandemic, An decided to pursue classical music as a part-time hobby instead of a full-time career due to financial concerns.

“Almost 90 percent of the day, I think I like the fact that I can do both … and [I spend] five percent wishing I had pursued my dreams of being a soloist, and the other five percent is seeing how much I would’ve suffered and really being thankful that I have this job for financial stability at this time,” she said.

Even longtime freelancers like Robert Susman and Dave Morgan, members of the jazz group Funk Shui NYC, who used to regularly play at Harlem clubs like Silvana, are unsure of how the music world will look as the pandemic continues. Morgan fears that the winter months will be another impediment to live performance, even if the country’s executive leadership changes and finds new ways to manage the pandemic.

“I’m worried about what the months of November and December are going to look like in America,” Morgan said. “I think that concern sort of transcends our artistic concern.”

Despite these worries, Susman believes that there is still hope for the industry. Over thirty years ago, he was told not to go into music because record sales were going down and musicians were competing for wedding gigs and studio work. Yet, he was still able to make a living through freelancing and other opportunities.

“I think there will be a return … I think the music industry might be leaner and meaner,” Susman said. “There will be people that leave. It will be a different industry. But more than ever, I think people are desperate to go out and have a good time, and I think when it comes back, it’s going to come roaring back.”