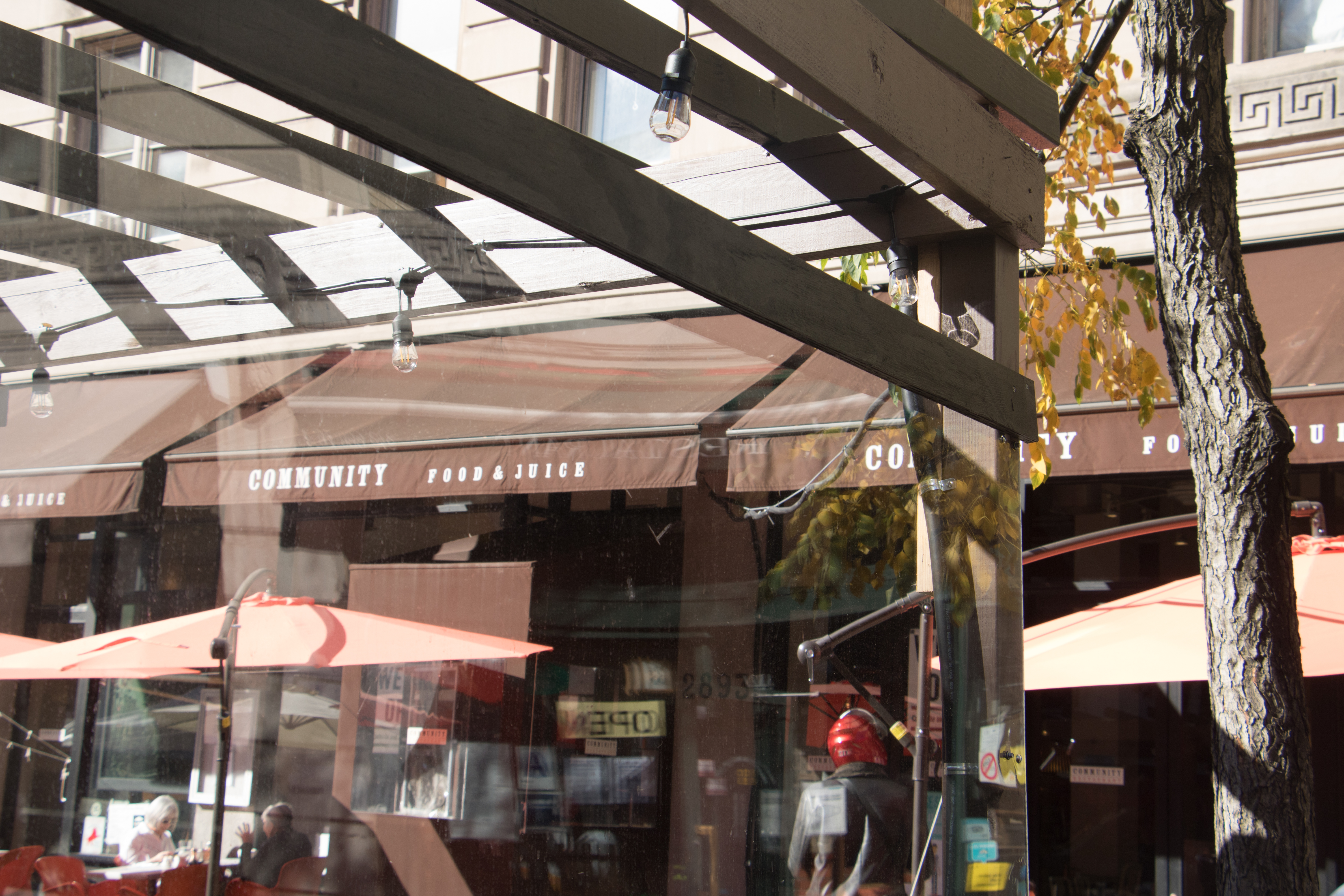 For restaurant owners, new outdoor dining regulations—along with the lingering fear of an indoor or outdoor dining shutdown—could lead to heightened maintenance fees, tiresome rebuilding, and more restructuring toward a takeout and delivery model.

Over the past 13 years, Community Food & Juice on Broadway has never done a delivery order. Every now and then, the restaurant would fill a takeout order for a regular customer, but the restaurant primarily operated as an eclectic sit-down establishment. Once the pandemic hit, Community had to quickly pivot to what co-owner Dede Lahman described as a “takeout and delivery machine.”

“We were able to determine our bestsellers, what our customers love the most, what would travel best, [and] what would be most sanitary,” Lahman said. “We figured out how to package that and then get these delivery apps on board and basically pivot our restaurant through delivery apps.”

When New York entered lockdown back in March, a majority of single storefront eateries—many of which relied heavily on sit-down dining—shut their doors as they prepared to operate solely on takeout and delivery until restrictions were loosened in June. In April, Spectator found that 37 out of 66 single storefronts in the Columbia area had closed temporarily. For businesses lacking components of that restaurant model, the transition required creative thinking to attract local diners.

While some sit-down restaurants in the area, including several Italian, Chinese, and Indian spots, had takeout and delivery infrastructures in place pre-pandemic, others have had more difficult transitions due to food packaging concerns and a greater reliance on more formal dining experiences. Often, these restaurants serve cuisines that customers do not typically think of as takeout food, such as French, American, and Cuban. For these restaurant owners, new outdoor dining regulations—along with the lingering fear of an indoor or outdoor dining shutdown—could lead to heightened maintenance fees, tiresome rebuilding, and more restructuring toward a takeout and delivery model.

Cuban eatery Calle Ocho has not fully adapted to a takeout and delivery model because contrary to Chinese or Mexican eateries, the Morningside Heights community has not considered Cuban food to be a go-to takeout and delivery cuisine. According to Jeff Kadish, the co-founder of Main Street Restaurant Partners Group, which directs the operations of Calle Ocho, the restaurant has never done takeout and delivery to a large degree during its almost 22 years in business.

Kadish notes that the restaurant has been doing “fairly well” with its expansive outdoor setup. Since takeout and delivery remain a substantial part of Calle Ocho’s revenue during the pandemic, however, the restaurant has had to adjust its takeout menu to take into account the delivery timeframe and reheating process.

“As an example, we don’t put any fried food on our to-go and delivery menu. We don’t put any items that will get soggy or will lose flavor or presentation,” Kadish said. “We decided to do some items that we don’t even have on our regular menu, doing a little bit more of Mexican food, tacos.”

As a restaurant that prides itself on being a dine-in eatery, a number of Community’s dishes were not adapted for delivery. Lahman noted that dishes like the steak of the day could not be tossed in a container and sent to diners; if someone wanted it rare, she said, it could cook a little bit in a container, lowering its quality and value by the time the customer received it. To address packaging concerns, Lahman, who also co-owns Clinton Street Baking Company & Restaurant downtown, shipped many containers uptown and taught Community’s chefs the most effective way to package every dish.

“So all the sudden, we completely turned our business backwards, reconfigured it, and in all that process had more work doing all of that than we’ve ever done before without making any money, without having any of our employees back in-house, maybe one or two, and being compromised personally with family, children, health,” Lahman said.

On the other hand, 314 Pizza Pasta & Wine Bar, a small Italian restaurant on Amsterdam Avenue, has always offered takeout and delivery. Social media manager Roberta Mastrandrea noted that 314′s delivery sales have become three times larger during the pandemic, due in part to the restaurant’s new takeout and delivery strategies. However, the transition to delivery has still limited menu options as the restaurant has tried to reach new customers to make up revenue losses.

“At first, we offered a free bottle of wine for every takeout order superior to $50,” Mastrandrea said. “Then we add[ed] new items that were a little bit far from our traditional choices but helped us to reach a new slice of customers. On the other hand, we had to remove the most expensive items with a short shelf life.”

Among the items cut from the menu are salt-cod fritters, Riverside pizza with Sicilian tuna, and linguine ai frutti di mare, while added items include Gambero pasta with orecchiette, shrimp, and burrata; Tartufo pasta with mixed mushrooms and truffle oil; and “en-DOO-ya” pizza with pickled peppers, ricotta, and 'nduja pork.

Cafe Du Soleil has also had to adjust its takeout and delivery menu—as well as reduce prices—to encourage more people to order from them. Owner Nadine Chevreux said that Cafe Du Soleil plans to hire more delivery people and fill more catering orders for larger parties. For now, though, the restaurant is enjoying the outdoor dining season while it lasts.

“We are taking advantage of every single day that is still nice, because the truth is, we have had a good November,” Chevreux said.

Despite limited menu options for certain restaurants, the transition to takeout has grown their ability to reach a wider range of customers, particularly through the use of third-party delivery apps like Seamless, Grubhub, and Uber Eats. Given the unpredictability of the restaurant industry, third-party delivery services could help restaurants that are lacking a comprehensive delivery structure to reach a wide range of people, especially since the percentages that delivery apps can charge have been regulated.

Among restaurants that have moved onto third party platforms include Calle Ocho and V&T Pizzeria & Restaurant, the latter of which added new delivery apps since the start of the pandemic, according to owner Anthony Gjolaj. According to Kadish, Calle Ocho had never even considered the idea of hiring delivery people, buying bicycles, getting the permits, and handling the insurance when delivery had never been a major part of their revenue. Kadish said that if restaurants are confident that they can achieve sales levels of a certain amount, then it is worth it to have in-house delivery and pay for that, but for businesses where this cost is more questionable, it is much more economical to use the third-party delivery system.

However, delivery apps come with a cost—while ordering delivery directly through a restaurant returns all commission back to the restaurant, third-party services take a portion of commission for themselves, sometimes between 20 to 30 percent. Mastrandrea said that delivery apps are a win-lose platform in that they “fill the gap between the restaurants and the customers” and “take care of advertising” but have a significant impact on finances.

Unlike many other sit-down eateries in Morningside Heights, Italian restaurant Fumo transitioned smoothly to a takeout and delivery model since upwards of 20 percent of Fumo’s pre-pandemic revenue came from those orders, according to co-owner Steven Gallo. The restaurant made few changes to its menu and delivery service, hiring a few more delivery people while letting go of a few waiters and busboys. Despite having a large in-house delivery team, the restaurant has had to grapple with losses from its decision to expand to third-party apps.

“The biggest reason why we use it versus our own in-house is because their platform is much larger than ours, so they have bigger reach and they’re basically a search engine,” Gallo said. “They do charge a high commission, where that kind of comes into our bottom line and our profit. So, in a way, it’s great for visibility and getting the customer in the door, but it’s not great for us in the sense of profit.”

As a result, Fumo has tried to direct customers to its online delivery site so it can keep the vast majority of profits, which in turn allows the restaurant to keep as many of its employees as possible. Fumo has launched a rewards program where customers gain Rocketbucks through a system called 9Fold with every order, incentivizing customers to move away from using delivery apps.

“We prefer when people call us directly because those [delivery apps] take a big percentage,” Chevreux said. “So, if people want to do a favor to the restaurant, they [should] call directly. It’s much easier and then we save money on that commission.”

However, according to Lahman, delivery apps are almost a requirement for restaurants lacking a delivery model to survive, especially when many landlords are charging full rent and restaurants can only seat diners at 25 percent indoor capacity.

Diners who want to help the Morningside Heights restaurant industry through takeout and delivery should “stay as local as possible, and stay as small as possible,” according to Kadish, who noted that Calle Ocho has divided up its hours among more staff members to protect its “big family.”

“It’s like going to your local hardware store as opposed to going to Home Depot,” Kadish said.

Despite menu and staff changes that have come with the transition to delivery, Lahman emphasized that restaurant owners have dedicated a majority of resources to maintaining the same quality of food for their customers.

“We are literally turning all of our fine focused attention that we do with the normal restaurant dining in, we’re putting all that professional attention on our takeout and delivery food, and we’re taking pride in it.”