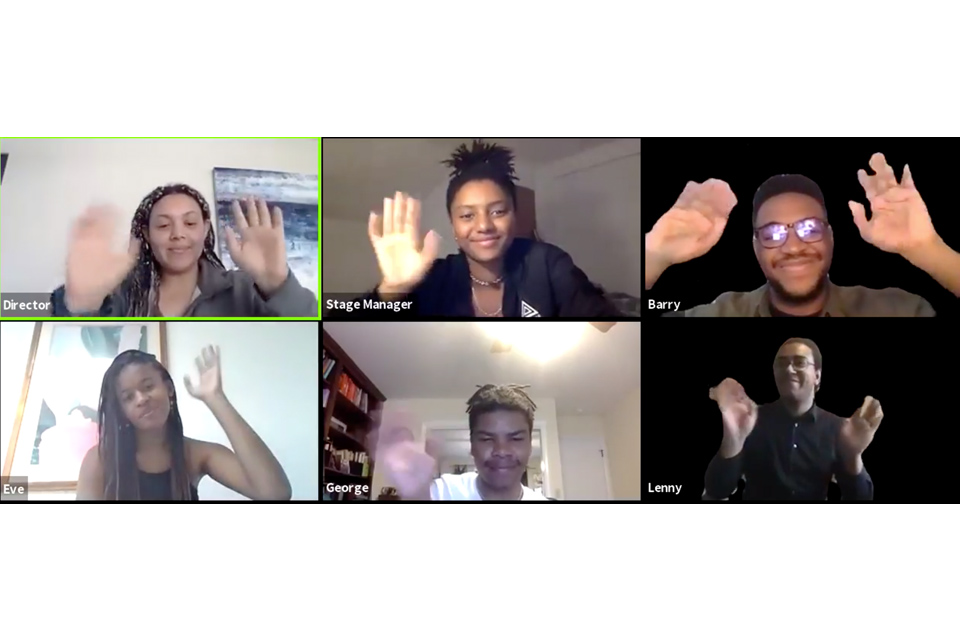 The Black Theatre Ensemble presented a staged reading of Cris Eli Blak’s “Sons of Liberty,” a moving portrayal of a haunted veteran grappling with broken dreams and what it means to be an American “hero.”

“This country owes me. Its spine, its legs, its head—they belong to me!” George exclaims, disillusioned since returning from service in Iraq. “I was the big man, hell, I was the man. Nobody dared to mess with stone-cold George. Nobody knows how that feels.”

On Nov. 13, the Black Theatre Ensemble presented a virtual staged reading of “Sons of Liberty,” written by award-winning playwright Cris Eli Blak and directed by Madison Hatchett, BC ’22. The set design and costuming for the reading were kept to a minimum, allowing for an emphasis on the play’s rich dialogue and occasional songs.

Blak, who has written over 20 plays in collaboration with theaters across the globe, tells stories that are rooted in reality and highlight voices that often go unheard. He has said that his work has “always talked about … social issues,” from police brutality against Black people to the devastation of war, and he views art as a form of protest. The Black Theatre Ensemble’s choice to present “Sons of Liberty” during Veterans Day week was apt, inviting the audience to reflect on veterans’ experiences and how they are inflected by race.

“Sons of Liberty” tells the story of George, played by Kay Kemp, CC ʼ22, an Iraq veteran grappling with the traumatic aftermath of war, and his brother, Barry, portrayed by Blessing Utomi, CC ʼ22, a traditionalist who dreams of getting married and becoming wealthy. As Hurricane Katrina rapidly approaches and threatens to dislodge them from their home, the brothers come to terms with who they are and who they wish to become.

The production opens with a heartfelt tune sung by George, woefully reminiscing on a lost lover. He plays the guitar as he sings, a hobby he has picked up since returning from the war. When Barry enters the scene, the two brothers engage in a playful dialogue as Barry relates his infatuation with the girl he is dating and fantasizes about building a mansion. While there is a strong sense of brotherhood between them, a hint of conflict is introduced when Barry expresses concern at his brother’s state of well-being, noticing that George has been neglecting to take his pills. Though the interaction was reduced to the alternating highlight of the actors’ two screens over Zoom, both Kemp and Utomi conveyed their contrasting characters’ personalities with conviction.

The scene shifts to a moving monologue by George that reveals the depth of his trauma. “You must not know!” he shouts defiantly at no one in particular. “I’ve seen the Devil himself. If he can’t stop me, what makes you think you can?” George has developed alcoholism along with an unnerving sense of invincibility stemming from the horrors he has seen. He left home to cheers, feeling pride in serving his country. When he returned, though, he was treated as anything but an American hero.

In a conversation with Barry’s date Eve, played by Brianna Johnson, BC ’21, George is frustrated with her inability to understand what he has been through––an attitude he has developed toward most of the people in his life. He wonders what constitutes an “American” identity, details the struggles faced by the Black soldier, and questions whether he belongs in the country that he has selflessly defended.

George receives a visitor who seems to provide an example of how he might rebuild his life. Lenny, played by Lucas Gomes, CC ’21, fought alongside George in the war, and he is an earnest, respectable man who has overcome his demons. George, however, is reluctant to accept his advice, cynically dismissing his talk of “brotherhood.”

The play reaches a climax when George confesses to Eve that he has been diagnosed with terminal liver cancer. He wants to conceal his illness from Barry to preserve his brother’s innocence and dreams. To console him, Eve sings a song called “Hey Mr. Songbird,” delicately urging George to “let go and fly.”

The play ends the way it started—with a song and a guitar. This time, it is Eve who sings, Eve who dares to sit where George sat to spend time in his shoes. George is gone, but Eve suggests a renewal of hope and the fulfillment of Barry’s dreams that were perhaps George’s, too. The use of song, even over Zoom, was effective in bringing forth the central themes of the play and a beautiful addition to its dialogue.

With this poignant portrayal of a man haunted by his wartime past, the Black Theatre Ensemble complicated the American “hero” that many are quick to mythologize and highlighted the struggles of the Black soldier who must navigate his identity while defending a country that doesn’t defend him.