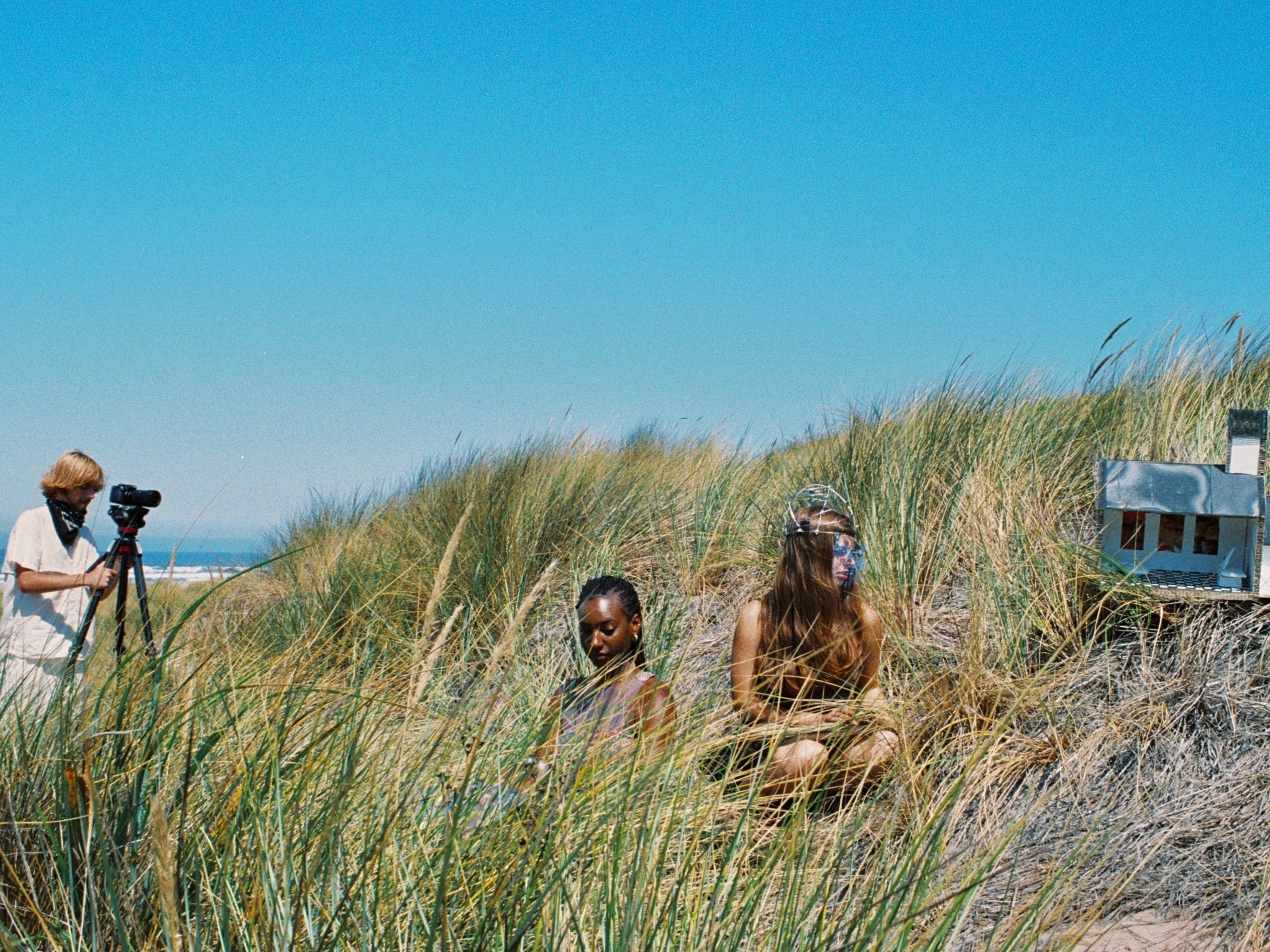 Fergus Campbell, CC '22, was able to film the finale of episode six of “Sankyo Stream of Consciousness” in person. However, amid the pandemic, he also turned to animation to continue production remotely.

The miniature chapel is pushed into the river by the beach guardians. Standing inside, the animated character Sankyo watches as it quickly fills with water. “Is that normal?” he asks Cressidia, the chapel’s guardian, to which she replies, “No, Sankyo.”

The chapel, submerged further into the water by the beach guardians, begins to tip over on its side. As the words “Sankyo, where do you go?” melodically echo in the background, the real-life Sankyo emerges from the river, reborn and ready to start anew.

The theme of rebirth and new beginnings is central to the latest episode of “Sankyo Stream of Consciousness,” a series written, directed, and produced by Fergus Campbell, CC ’22. The series follows the story of Sankyo and Finch, two film students on a quest to secure an interview with famous director Paul Thomas Anderson, and features interludes of experimental poetry, song, and dance that loosely represent the protagonists’ inner monologues.

The sixth and most recent episode, released last month, shifts direction from the main narrative of the series to focus almost exclusively on Sankyo’s inner consciousness following Finch’s departure from the story. At the end of the previous episode, after missing a scheduled meeting with the artist Alex Itin on Paul Thomas Anderson’s craft, Sankyo confronts Finch, saying that they should no longer work together since Finch is not as invested as he is in securing the interview.

“No, see, that’s the real problem,” Finch replies. “You think that what we’re doing here actually counts, but the truth is that we’re not any closer to finding him than we were four months ago. It’s delusional. It’s not even about Paul Thomas Anderson anymore. It’s about you!”

“This isn’t about me,” Sankyo responds coldly.

But to some extent, it is. This exchange serves as the backbone for episode six’s dive into the inner workings of Sankyo’s mind, taking the audience through a series of fragmented dream-like sequences that highlight his journey towards self-discovery.

“[Sankyo] will still continue the quest but with a bit more skepticism and a more objective stance on the merits of such an interview. He’s not so naïve, and his ignorance has become more grounded,” Campbell said.

Originally, the latest episode of the series was planned for production in late April, but when campus closed in early March, these plans were put on hold. Over the summer, Campbell rethought how he would produce the show with no access to in-person shooting. Without the ability to include live-action shots, Campbell turned to another creative medium to tell the story: animation.

Animating the episode was not only a creative way to work around the pandemic but also a useful tool in illustrating Sankyo’s mind to the viewer. The animation and most of the live-action scenes are bright and colorful, in contrast to the grainy black and white aesthetic of the previous episodes. Like the storyline, the visuals shifted away from the established status quo, further distinguishing the episode as a turning point in the trajectory of the series.

“I think quarantine gave me the time to consider animation seriously since it is really time-intensive,” Campbell said. “I don’t know how soon I would go back to it since it felt really specific to this interlude between what I hope are periods of in-person shoots.” 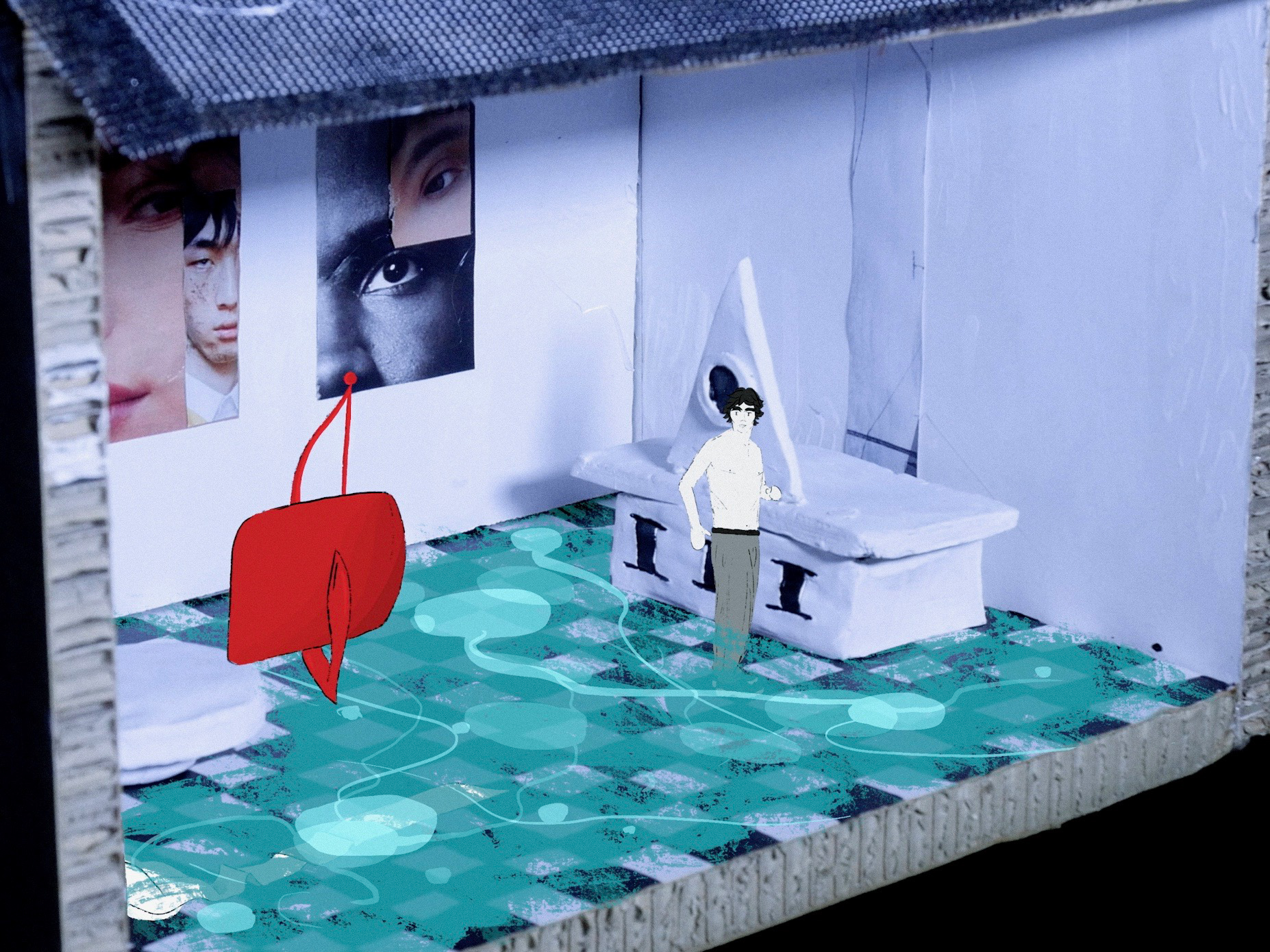 Fergus Campbell
An animated scene from the sixth and latest episode of “Sankyo Stream of Consciousness.”

Though most of the scenes in the episode are animated, a few include live-action shots, which were filmed over the summer and at the start of the school year in adherence to social distancing guidelines. One of these scenes featured the return of Maude Latour, CC ’22, playing a fictional version of herself. Her appearance in the latest episode served as a direct contrast to how she was introduced to the series.

“I wanted to contrast her first appearance, which was so lively, [as] she got to display this wild ability to perform her songs, [with this episode,] where her personality is still performative, but she’s quieter,” Campbell said.

At the time of shooting, Latour and Campbell lived together, allowing them to film her scene live in their apartment. Through the strategic placement of props and neon lights, they were able to transform their bathroom into a fitting set.

“[The pandemic has made] when you can make art more special because it’s harder to come by and it takes a lot more effort,” Latour said. “It requires you to be a lot more creative. We shot in our house and decorated this whole room, and we probably would have done something different were it not for the pandemic.”

Since the series first began, a number of other Columbia student-artists have contributed to the project. Additionally, many of Campbell’s friends and family from outside the University have helped construct props, design costumes, and serve as actors.

One vital contribution to the latest episode was the song “Sankyo’s Fall,” written, composed, and recorded by Sarah Kinsley Du, CC ’22, and remixed by Mac Waters, CC ’22. The haunting lyrics, combined with a rippling piano effect, created the sonic atmosphere for Sankyo’s scene with the beach guardians.

“I think the context in people’s lives always determines the way in which we view the meaning of music and the way we interpret it,” Kinsley Du remarked. “I don’t think consciously I was thinking about the pandemic [while writing the song], but I do think there’s a greater layer of isolation and being trapped inside our homes, just like Sankyo is, that we’re all experiencing .”

Joan Tate, CC ’22, also contributed the poem “Dime Light” to the production. She reflected on how her gender transition while living at home earlier this spring influenced the themes in her poem, which include feelings of anticipation.

“For me, this became this image of a light on someone’s forehead and then giving that light thought,” she said. “It’s this weird, vaguely esoteric vision. It was me trying to figure out what I felt like at that moment and how that could be reflected [in the poem].”

While there is no definitive ending planned for the series, Campbell believes he will either finish the series at the end of his senior year or pass it on to a fellow Columbia student to continue its legacy. For Tate, “Sankyo Stream of Consciousness’” holds an important place in the Columbia art community, offering insight into what it means to be an artist today.

“It’s a series that explores art in a way that’s tongue-in-cheek enough that it’s enjoyable and funny, while at the same time trying to look at what art in college really looks like,” Tate said.