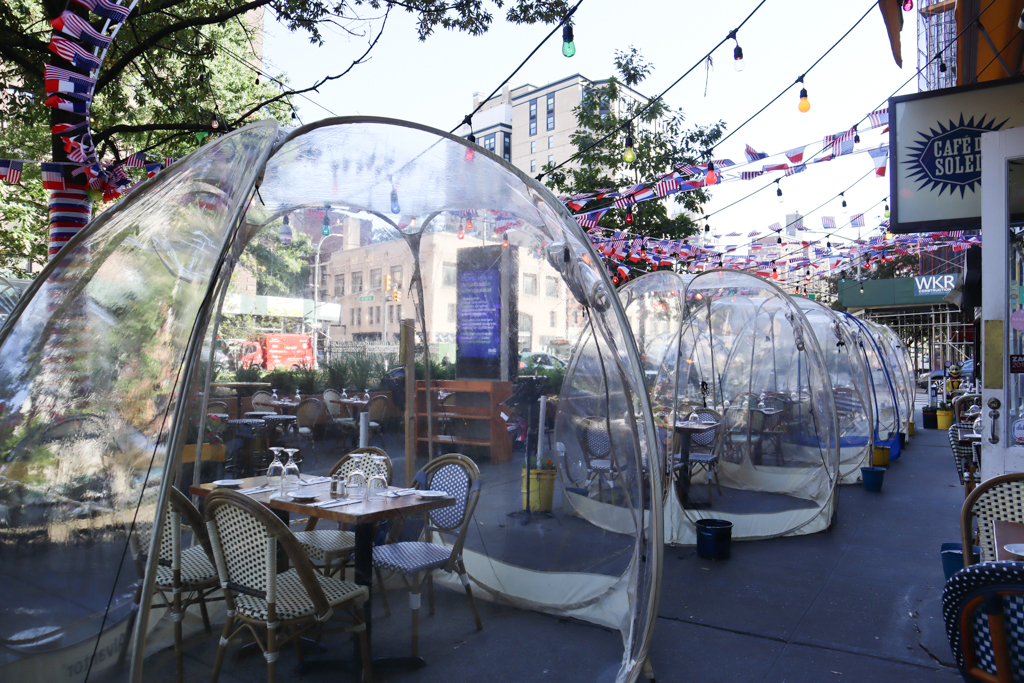 On Dec. 11, Gov. Andrew Cuomo announced that indoor dining will be suspended in New York City restaurants starting Monday, dealing a major setback to the city’s already struggling restaurant industry. The decision comes as the city faces rising hospitalization rates; as of Dec. 11, 1,668 people were hospitalized with COVID-19 in New York City, which is on a trajectory to hit 90 percent of its hospital capacity.

Since Sept. 30, New York City restaurants have been allowed to open for indoor dining up to a 25 percent capacity. However, restaurant employment has yet to return to pre-pandemic levels. According to the Bureau of Labor Statistics, the city’s bars and restaurants recovered just 11,700 jobs last month, bringing overall hospitality employment to 59 percent of February’s numbers. While just 1.43 percent of the city’s 46,000 known cases of COVID-19 transmission between September and November could be traced back to restaurants and bars, Cuomo said that indoor dining was “one of the few areas that we think we can actually make a difference.”

“Another forced government closure of New York City restaurants will cause an irreversible harm on even countless more small businesses and the hundreds of thousands of workers they employ, especially if it is not coupled with financial relief,” Andrew Rigie, the executive director of the New York City Hospitality Alliance, said in a statement on Dec. 7.

Indoor dining was a much-needed relief to the community’s restaurants, many of which have felt the effects of a heavily-reduced student body in Morningside Heights. For restaurants that bought air purifiers and had circulation infrastructure, like Arts & Crafts Beer Parlor, indoor dining was an opportunity to increase revenue while returning to some semblance of a pre-pandemic dining experience. Michael Zoulis, the owner of Tom’s Restaurant, also shared a similar optimistic attitude back in October.

“We had no choice. We needed to survive. We needed to start indoor dining,” Zoulis said. “You can’t survive with seven tables outside, so we’re taking some precautions indoors.”

Back on October, Nadine Chevreux, the owner of sit-down restaurant Cafe Du Soleil, felt that restaurants with the necessary infrastructure could have safely operated at 50 percent capacity, cautioning that colder weather would make outdoor dining much more difficult. Other sit-down eateries that had rarely offered takeout or delivery options, like Community Food & Juice, shifted gears during the pandemic, yet indoor dining had allowed these sit-down restaurants to provide the atmosphere business owners have cited as crucial to the experience they provide. Other restaurants have yet to make the shift, compounding the effects of this regulation. Calle Ocho has not fully adapted to a takeout and delivery model since many diners have not considered Cuban cuisine a go-to for takeout or delivery, and the restaurant has focused efforts mainly on outdoor and indoor dining.

Some Harlem restaurants like The Edge lacked the outdoor space for many tables, but indoor dining was an opportunity to serve a wider array of diners while keeping costs low. Although grant programs have helped a number of Harlem restaurants set up winterized outdoor dining, many others have not been able to take advantage of these new regulations due to the prohibitive costs of heating equipment and other fixes. The “cliquish” nature of Harlem’s restaurant scene combined with insufficient financial infrastructure and limited government and city support have burdened many Harlem restaurants.

With heightened outdoor dining restrictions and the possibility of further changes to outdoor dining, local restaurants must reevaluate their business models now that a revenue stream for many restaurants is gone. Cuomo is calling on the federal government to provide restaurant relief through a stimulus plan, but it remains stalled in Congress.

“Yes, there will be an economic hardship from 25 percent to 0, but we have compensated in other ways,” Cuomo said. “This is a situation that has affected every business community, not just restaurants. … The end is in sight, but we still have to get there.”