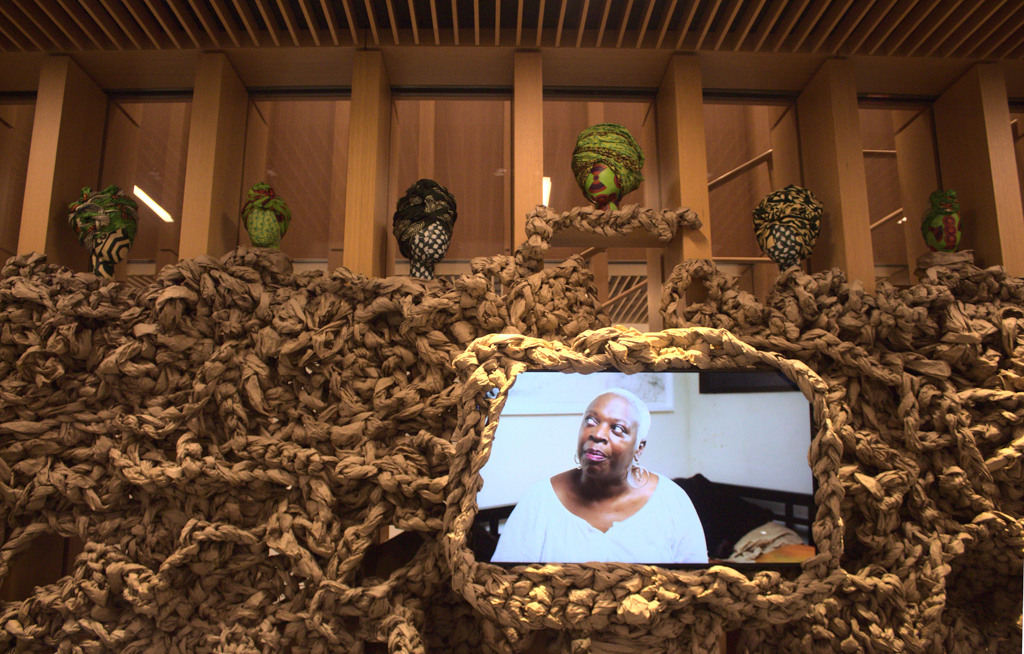 Barnard’s Milstein Center for Teaching and Learning presents Dianne Smith’s installation “STUFF,” which celebrates the legacy of renowned playwright Ntozake Shange, BC ’70. By highlighting the voices of women of color, the exhibit confronts social issues of racism and gender inequality.

A massive installation created from brown butcher paper weaves throughout the lobby of Barnard’s Milstein Center for Teaching and Learning. It encases three television screens featuring videos of six women of color sharing experiences of their “stuff” being taken away. Alongside the installation, archival materials, including photos and manuscripts, are displayed.

This is the exhibit “STUFF,” featuring a large multimedia installation work by contemporary artist Dianne Smith. The display is a part of the Shange Magic Project, which celebrates the Barnard alumna and renowned playwright Ntozake Shange, BC ’70. Originally set to open last March, “STUFF” opened on Sept. 8 and is available both online and in-person at the Milstein Center until Aug. 16, inviting audiences to confront issues faced by women of color in the past and present.

Peter “Souleo” Wright, the curator of the exhibition, highlights Shange’s legacy of self-empowerment and pioneering advocacy for gender and race issues.

“She was talking about issues that were not popular to talk about at the time, but she was unafraid and courageous enough to speak about domestic violence, speak about racial identity issues, and rape, and sexuality, and distill it in a very artistic way at a time when it wasn’t popular,” Souleo said.

Smith’s multimedia installation directly responds to Ntozake Shange’s “somebody almost walked off wid alla my stuff” from the choreopoem “For Colored Girls.” Through her use of raw footage and authentic storytelling, Smith closely examines what “stuff” is and what it means for it to be stolen. 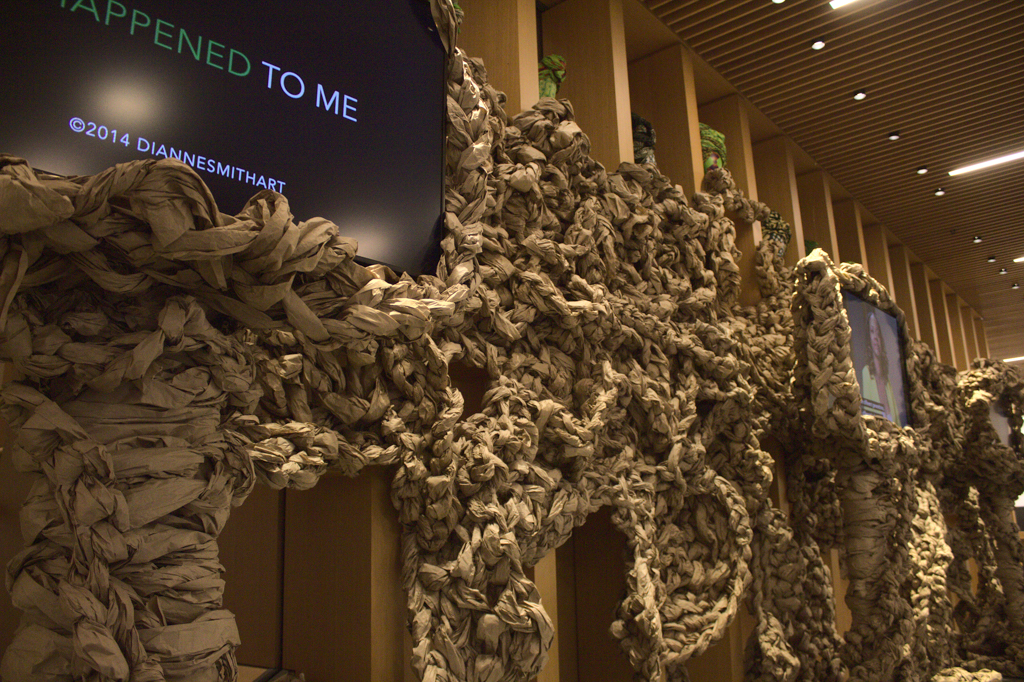 The central installation screen features an hour-long video, documenting six of Smith’s friends sharing their own stories and interpretations of having “stuff” taken away from them. Experiences range from going through a divorce, suffering from domestic violence, and being silenced on a bus for whistling as a young girl.

By highlighting women of color narrating their struggles, Smith aims to uplift the voices of women and create a space of healing and reclamation.

“These stories were of healing and empowerment, not so much from a complaining or victim sort of standpoint, but just sharing what happened and how they triumph through someone walking off with all their stuff,” Smith said.

In addition to the installation, the exhibit also displays many original manuscripts of “For Colored Girls” and photographs of previous productions, which are part of the archive that Shange donated to the Barnard Library.

Martha Tenney, director of the Barnard Archives and Special Collections, explains that Shange’s archive serves as the historical backbone of the exhibit.

“[I think] about [Smith]’s artwork as the looking forward, or like what someone was inspired to create, based on [Shange]’s work,” Tenney said. “The archival materials provide some historical context for how that work both were created, and then how it grew into this phenomenon that’s still inspiring new works.”

Miriam Neptune, interim Barnard Library and Academic Information Services co-dean, explained how the exhibition’s location in the lobby of the Milstein Center was proposed in light of a spring 2019 incident in which Black Columbia student Alexander McNab, CC ’19, was physically restrained by Barnard Public Safety.

“That became a very difficult moment for the community, grappling with the fact that we have a culture [where] Black bodies on our campus are identified as not belonging, people in those identities having to wonder if they’re safe on our campus,” Neptune explained. 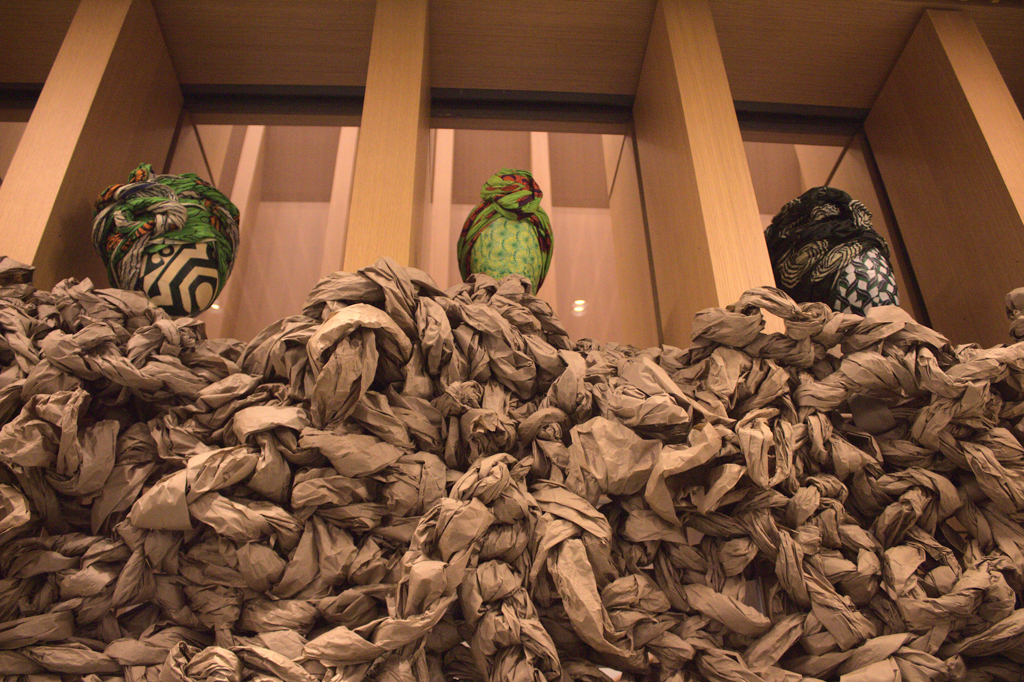 Through this exhibition, which aims to reclaim the power of women and people of color, the Barnard Library team hopes to create a space of healing and empowerment.

“We were thinking about the exhibit being there as part of the healing process and part of a way of redefining the space and signaling again to Black members of our community and our student body that you do belong here,” Neptune said. “This is your space. In fact, you have a legacy of someone who attended Barnard and all of the complications of that.”

The “STUFF” website not only features photographs and videos from the exhibition and archive but also includes a Spotify playlist, a timelapse video of Smith installing the work in the Milstein Center, and links to various action items, such as domestic violence support and a petition demanding justice for Breonna Taylor.

“I wanted to definitely have a section on here, especially [since] some people wouldn’t be able to physically see the show, at least I could take away an action item from it,” Souleo said. “We wanted to encourage them to vote and to get more information about domestic violence. I think just having the idea is wonderful, but I think the times demand a little more action as well.”