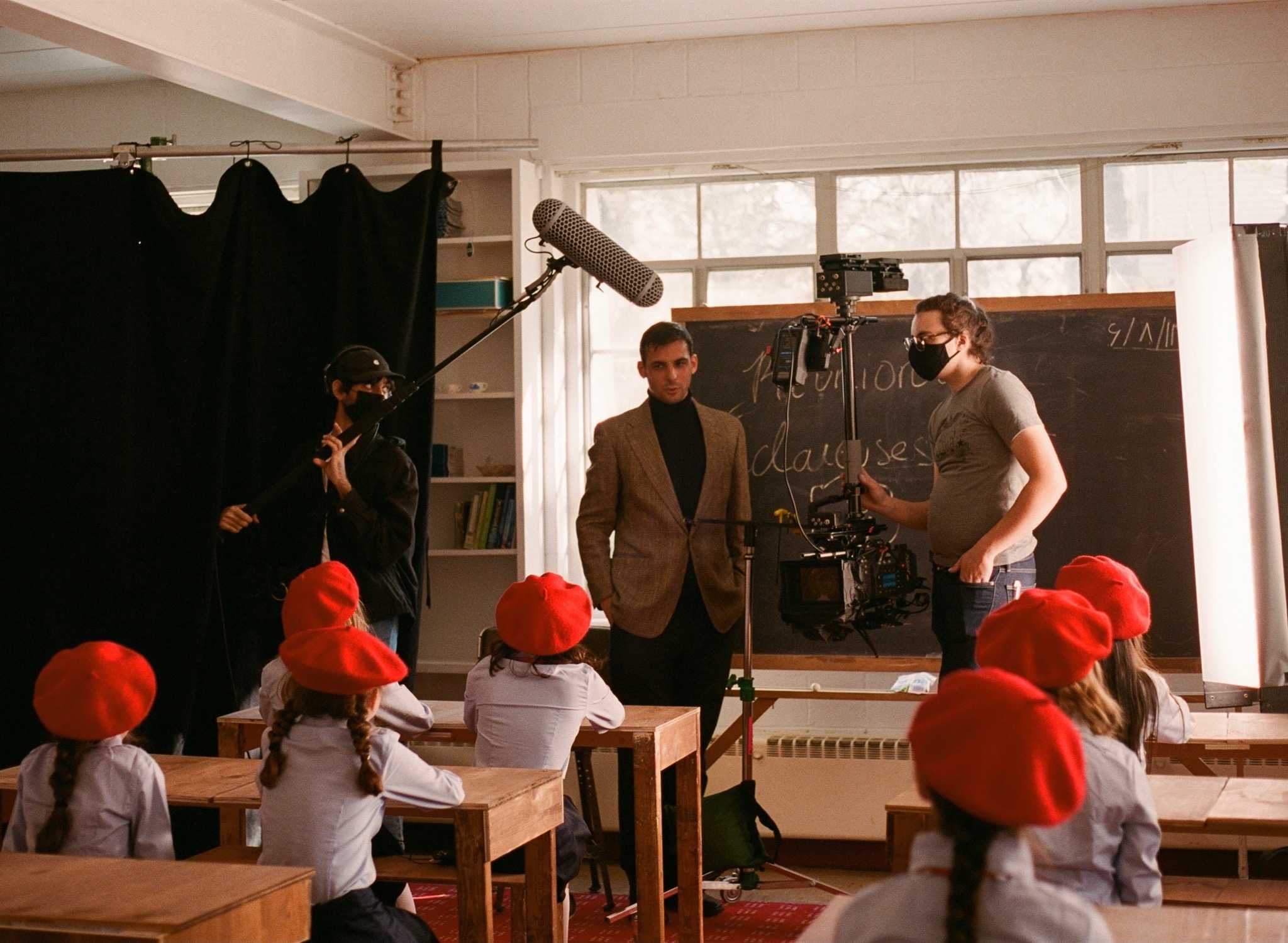 “Anges” follows the journey of elementary school girls in Iran as they take active roles in helping their community.

Le Lycée Razi, Tehran, 1968. A group of Iranian Girl Scouts embark on their annual public service week to prepare for the historic visit of French President Georges Pompidou, accompanied by the Shah of Iran. Assigned mundane tasks, one of the girls finds an opportunity to do something unique to benefit her own community, as well as please Pompidou.

The French short film “Anges” follows the journey of these young girls as they take active roles in helping their community. The short is set to be completed this spring and was written and directed by Jasmine Bissete, CC ’19; produced by Joshua Chun, CC ’21 and Maya Hartleben, BC ’19; and edited by Shawn Anand, CC ’21.

“[Anges] shows these elementary-age students developing a deeper understanding of their role, leveraging their understanding of community service, and taking an active role in the legacy they’ll leave behind as they move to the next stage of their lives,” Bissete said.

Bissete noted that her inspiration for the film’s setting and plot came from her time working at the French Embassy in New York, where she organized events hosting French authors and artists from across the world.

“My big inspiration for this … was the role that the French language plays in being a bridge between different cultures,” Bissete said. “So for me, I would say that in many ways, the French language is almost like the principal character of this film.”

Bissete first met Chun and Anand in her Contemporary Civilization class as a senior and was drawn to their passions for cinema. Despite not knowing each other at Columbia, Bissete met Hartleben while working in the media industry. Bissete had begun writing the script for “Anges” during the beginning of the pandemic; by the summer, she brought on the producers and editors.

With the team scattered across the United States, casting posed a major challenge: The film required child actors who were not only native or near-native French speakers, but who also resided in the New York area. While some casting took place through traditional sites like Backstage, the team found two of its three main leads through French parent groups on Facebook. According to Chun, it was important that the actors were all around the same height, which was difficult to gauge during virtual casting.

“It was a challenge casting virtually because you don’t get to meet them, and especially because they’re kids, you want to see their temperament, how they take direction especially,” Bissete said.

Replicating the 1968 Iran school setting was what Bissete considered the most difficult challenge during the film’s production. Due to the COVID-19 guidelines set by the New York City Department of Health and Mental Hygiene, most potential options for schools in New York or New Jersey were off-limits because schools could not allow third parties to film inside.

The team looked for locations on Long Island that could have accommodated the film crew, eventually settling on St. Stephen’s Episcopal Church in Port Washington. The rector of the church, the Rev. Lauren McLeavey, actually used to be a film student at Syracuse University before joining the church, and she let the team film in the 1950s-era schoolhouse on the grounds.

“We had a lot of instances of serendipity as well, especially with our location, ultimately because it had great light, a beautiful classroom, and other rooms and outside areas that we were able to use,” Bissete said.

While a number of the actors dropped out of production due to heightened concerns surrounding the pandemic, the team was able to capture all the footage within three days in November. The team also had a COVID-19 coordinator on set to ensure that everyone was getting tested, social distancing, and wearing masks when not on camera.

According to Bissete, the film is also much lighter than many Iranian films since it focuses on the rarely heard narrative of realizing ambitions and self-expression among young girls. The film touches on the theme of encouraging young girls not only to have their own ideas, but to also realize them with the help of those around them. According to Hartleben, the film attributes “agency to young girls, showing that they don’t have to follow this beaten path, they do have their own voice, and they have a say in things too.”

For Hartleben, the film was an exciting opportunity to reconnect with French language and culture, since she had only taken one semester of French in college after learning it for eight years prior.

“I had lost touch with [French] pretty quickly, and I think going back to it and getting to read the script in French and seeing on set the girls just exchanging casual dialogue with friends was definitely a nice way to reintroduce myself back into it,” Hartleben said.

The team stressed that the film, which is entirely in French, applies universally to different cultures and demographics. Bissete noted how the film has a direct translation to the Girl Scouts of America even though it takes place halfway across the world.

“The film is very specific, but it also has a universal appeal,” Chun said. “I was a Cub Scout myself, so even I can relate to some of the dynamics in the film.”

Despite the challenges of creating a film during the pandemic, the team found that the cast got along very well, especially since this was the first time in months that they were able to meet new friends and try new activities. Anand noted that through Zoom, the production team showed rough cuts and talked through edits.

“Now we’re getting to the point where we’re making very minute changes, and those are a lot easier to do in person, but with the schedule we set, knowing that we had to do everything online, and meeting every weekend and going through it … we were able to work around the whole pandemic,” Anand said.

Given the international nature of “Anges,” the team hopes to have the film shown at festivals globally, especially in Europe, North Africa, and the Middle East. Some festivals have already demonstrated interest, as the film’s Instagram page gained attention from featuring character introductions and behind-the-scenes images.

“I think the way that this film project came together is a great example of not only Columbia’s education, but also the Columbia community as a whole,” Bissete said. “Honestly, the film’s international point of view is something that I don’t think would have come to me in the same way if it weren’t for Columbia’s education and the perspective that it’s able to give us on the world.”