Amid feelings of frustration and fear, the return to indoor dining fuels restaurants in Morningside Heights

Amid feelings of frustration and fear, the return to indoor dining fuels restaurants in Morningside Heights 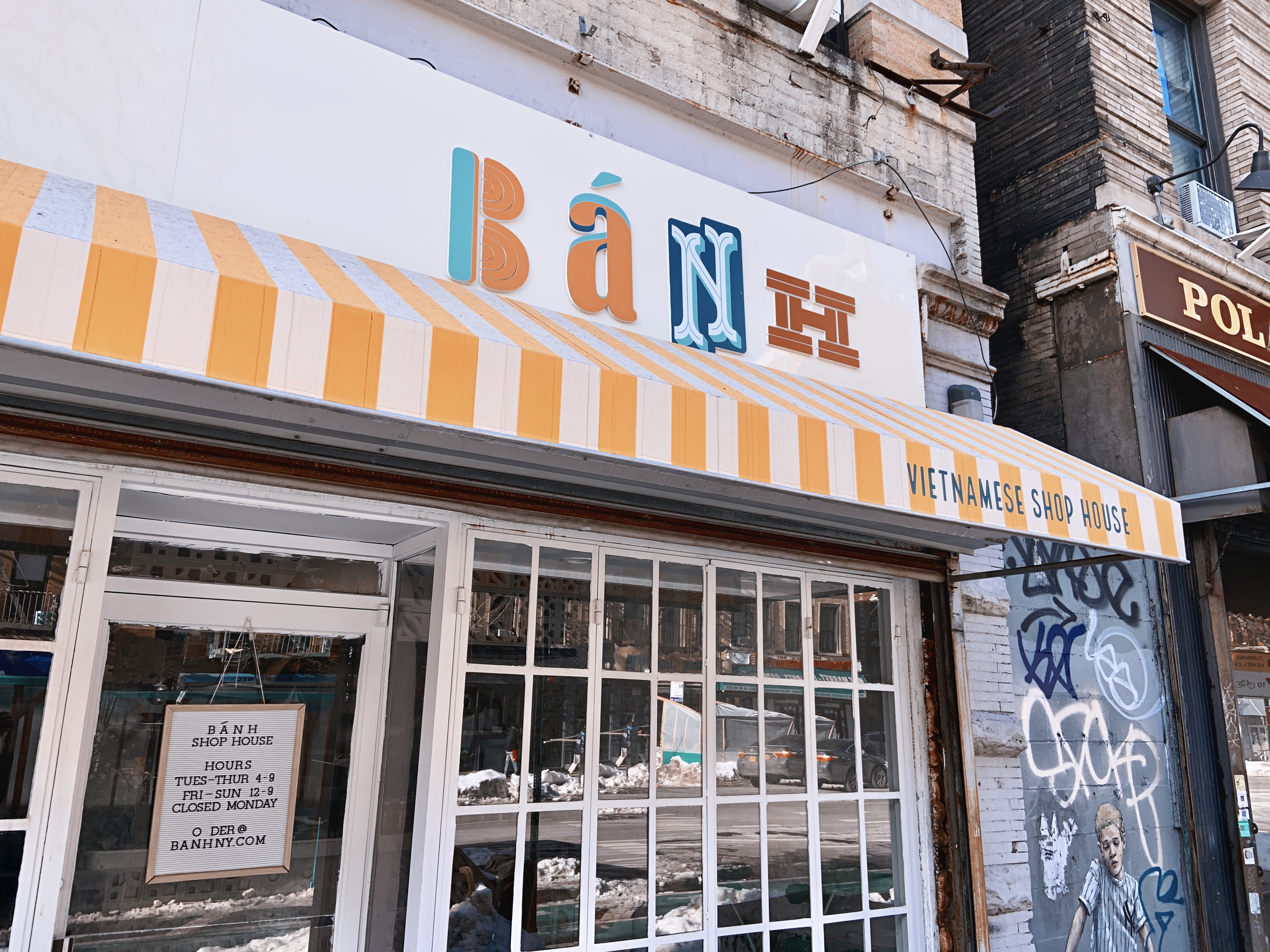 Bánh Vietnamese Shop House has served authentic Vietnamese food to Morningside Heights since October 2020. Co-Owner John Nguyen claims that its concept is unique, allowing the restaurant to thrive during the COVID-19 pandemic.

With COVID-19 positivity rates hovering between 4 and 5 percent statewide, Gov. Andrew Cuomo decided to reopen indoor dining at 25 percent capacity beginning on Feb. 12. This news, paired with increased vaccine rollout, gave restaurants in Morningside Heights a sliver of hope, especially since more than 1,000 restaurants in New York City have closed since March.

Despite closing indoor dining in December 2020 when positivity rates hovered around the same figures as this week, Cuomo decided that based on new cases per capita, hospitalizations, the test positivity rate, and the rate at which people are infecting each other, opening indoor dining would be a safe decision. Over 1 percent of COVID-19 transmissions were caused by indoor dining between September and November of 2020.

Originally, Cuomo announced in a statement that restaurants could reopen their indoor spaces to customers on Feb. 14 but changed his mind after city restaurants and residents pushed for an earlier opening date.

Despite this “foot race,” many Morningside Heights restaurants eagerly await the opportunity to welcome their customers back inside. Landlords have been kind, such as that of Calaveras Corner, who deemed it only necessary for the Mexican eatery to pay rent for the number of customers allowed in the restaurant: 25 percent rent for 25 percent capacity. However, other restaurants, such as Tom’s Restaurant, still struggle despite the kindness of its landlord, Columbia University.

“A lot of restaurants, they closed down forever because the landlords don’t want to lose their rent,” John Ieromonahos, part-owner of Tom’s Restaurant, said. “So if they close [indoor dining] again, I don’t know what’s going to happen. That’s the big question. We don’t know what’s going to happen. Our future is in jeopardy right now. We are in the hands of the government.”

Tom’s Restaurant used to be a place where customers could enjoy classic diner food as they watched the current sports game and talked to the chef at the bar. On Super Bowl Sunday, no one came in to enjoy the game.

“They decided to close indoor dining, and I don’t understand why. … I’m sitting over there all alone, doing nothing, waiting for somebody to come in and get an order, and stuff like that. … I was thinking, ‘Why?”’ Ieromonahos said. “Malls [are] open. You go downtown, especially around Christmastime, to the [Rockefeller] Christmas tree, [there are] tons of people. No social distancing, no masks, no nothing.”

This frustration comes after months of hardship. Many restaurants had to lay workers off. Tom’s Restaurant went from 36 employees to four, including Ieromonahos. Calaveras Corner, which opened in October, has had to lay off employees but plans to hire one or two new employees with the reopening of indoor dining. Customers are hesitant to speak to each other, weakening the charm of the dining experience. Fear for their safety also prevents customers and employees from ever receiving a moment free of worry.

This return brings to question the rate of transmission. More employees will be hired at some restaurants, while more customers come into contact with them. Cuomo plans to offset this increase by including restaurant employees in the next phase of vaccine distribution. This promise of safety gives hope to restaurant employees who have no choice but to work.

“They’re just happy because they know that means they’re going to continue to keep their jobs and that’s what they’re worried about,” Natalia Soto, one of the owners of Calaveras Corner, said. “I have guys who are working several part-time jobs, even doing stuff that they weren’t doing before, doing delivery. They’re just happy because they see the light at the end of the tunnel.”

This light at the end of the tunnel seems to be a common thought among restaurant employees. Crepes on Columbus, which has been open to the Morningside Heights community for more than 15 years, went from eight employees to only the owner Steve Hlay and his delivery man. With his mask adorned with the words “I Don’t Give a Crêpe,” Hlay takes orders, awaiting the celebrations that will occur in the future.

“We need to get [the pandemic] over with so people can celebrate,” Hlay said. “That’s why I think the fall and summer will be a big party. People will be celebrating. I think the food industry will bounce back maybe next year, definitely by the end of this year. I think a lot of people are just tired of being inside and want to socialize. I think they’ll come back.”

Restaurants yearn for a return to the normal that was once taken for granted. V&T Restaurant & Pizzeria, which has been open since 1945, eagerly awaits its indoor customers and a return to the busy nights of serving its classic cheese pizza and penne alla vodka.

“Every day would feel like a Saturday night because November and December for restaurants are extra busy. … So we would have a line out the door, there would be live concerts across the street. We would have so many bookings … and it would be fun,” Anthony Gjolaj, owner of V&T’s said. “I really miss it. … It was nice. I really hope we get back to that.”

There is still some sense of normalcy. Crepes on Columbus has a customer who has called to order a crepe every week for the past five years. However, the losses of the pandemic that include not only the deaths of more than 475,000 Americans but also the closure of more than 110,000 restaurants nationwide still hang above the heads of people in the restaurant industry.

Many find the closing of indoor dining to be unnecessary as it caused more restaurants to permanently close. Bánh Vietnamese Shop House has found tremendous success since opening in October 2020. However, co-owner John Nguyen found closing indoor dining to be unnecessary and welcomed it as an opportunity to show off the interior of his restaurant to attract more customers.

“It was the worst time to shut indoor dining, and everything can be scrutinized because we all have hindsight, so I have an idea of what could have been done better but it’s only because I have the fortune of hindsight, to be able to see, well, that obviously didn’t work,” Nguyen said. “I think the most important thing is not to dwell on what they did right or what they messed up on. We have to be able to adapt and adjust.”

Despite this gift of hindsight, restaurants cannot ignore the additional costs that accompany indoor dining. Besides ensuring that there is proper ventilation, owners must purchase hand sanitizer, instruments for recording temperature, and masks. However, some purchase gloves and dividers for their diners’ safety. Some restaurants that follow all the guidelines, like Calaveras Corner, have been lucky, and no one has gotten sick in their restaurant. However, others have not shared that same luck regarding the health of their customers and employees despite having purchased appropriate indoor dining equipment.

“We go through a lot of gallons of sanitizer because we need to get to everybody and then we’re constantly using it too, so that’s been an extra expense,” Soto said. “Also the cleaning companies that provided all the cleaning products sell a disinfectant that is very good quality and kills 99.9 percent of the virus, but it’s not a commercial product. And they use it in hospitals. So we buy that and that’s also expensive.”

After New York City has lost so many restaurants to the COVID-19 pandemic, many hope to breathe a sigh of relief after holding in so many feelings of confusion, grief, frustration, and fear during each phase of dining restrictions.

“Restaurants play an important role in their community,” Gjolaj said. “You can’t have a restaurant without indoor dining. So I think it’s going to do it justice. It’s enough for people to even see people indoor dining just for their mental health.”