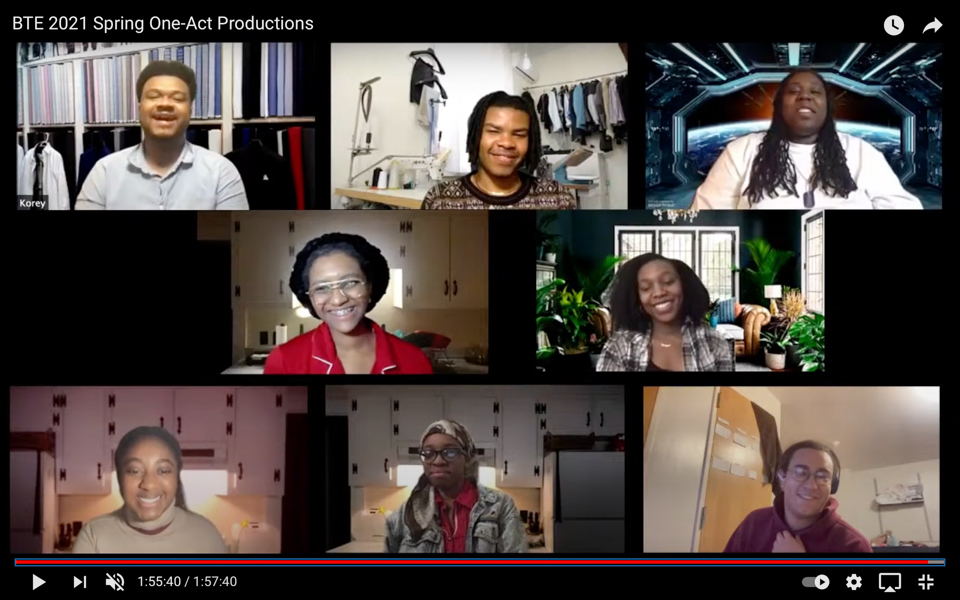 In an apartment full of cinnamon candles and pill organizers, dementia carves a wide gulf between a mother and her daughter. In a shoeshine shop in 1944, an army volunteer stakes his life on an empty promise. Together, they tell a story of personal and historical erasure, 75 years apart.

The Black Theatre Ensemble livestreamed its 2021 spring festival on YouTube from April 1 to 3, featuring two new plays by Kambi Gathesha, GS ’23, and Kay Kemp, CC ’22. Gathesha’s “D-Day,” directed by Princeton student Taneyah Jolly, was a resounding, cinematic tribute to the Black veterans of World War II. The evening closed Kemp’s with “Dream a Little Dream,” a graceful, heartrending portrait of motherhood and dementia directed by Mia Flowers, BC ’23.

Set in 1944, “D-Day” is a part documentary, part coming-of-age drama that traces the tragic military career of Korey, played by Trace Hughes. Korey is an 18-year-old college student and gifted baseball player who has grown restless. He imagines enlisting in the army and enjoying a global adventure, a heroic home-coming, and the guarantee of a GI degree. He believes in the propaganda of the “Double V,” which promised opportunities to Black soldiers with “victory abroad and victory at home.” Gathesha unravels this myth through the character of Mr. Todd, Korey’s employer and family friend who is played by Donita Anderson-Session, GS ’19.

“This is no romance, no fairytale. War is an ugly thing,” Mr. Todd explains.

Suddenly, the play switches genres: Gathesha rolls interview footage of elderly Black veterans speaking as the bright bossa nova beat of Noname’s revolution anthem, “Rainforest,” plays in the background. Written with minute historical detail and vibrant, swinging dialogue, Gathesha’s one-act play offers a glimpse into the lives and stories of these men and provides a long-overdue recognition of their service.

After a short intermission, the ethereal voice of Billie Holiday rises like a curtain over Kemp’s “Dream a Little Dream.” The play begins with a letterbox shot of a single pair of high heels and the hem of a shimmery red skirt. We meet Pricilla, played by Flowers, waltzing with a partner in the Schermerhorn courtyard. Snippets of their conversation play in a voice-over, disjointed and surreal, hinting that the scene might be an altered memory.

Pricilla’s daughter, Colleen, played by Wisdom Iheanyichukwu, CC ’24, has been caring for her for the past two months. She sits on the edge of her mother’s bed, humoring her bland conversation about Oral-B toothbrushes and different types of bread as they both skirt around the subject of dementia.

Time slowly melts together for Pricilla, erasing the difference between the past and present. Angel Boy, Colleen’s absent father, haunts her in every corner of the house—even appearing in the television set on “The Price is Right.” These moments of retreat from reality begin occurring more and more frequently, as Kemp opens up Pricilla’s memories and lets them stroll right into the kitchen.

Between the heart-stopping dialogue and shrewd performances, Kemp and Flowers clearly make an extraordinary team. Pricilla slips in and out of lucidity, warping the tone of the play like a rip current. One moment, she’s sparring with Angel Boy, gesturing with a knife as she cooks jambalaya. The next, her breath will quicken and her words will spill over into rapid, panicked meters of poetry.

Pricilla stops taking her medication, arguing that the pills are hurting her more than the disease. Colleen, convinced that her mother does not want to get better, finally decides to contact a nursing home.

“I can’t be frozen here with you,” Colleen says. “Counting the rings on your forehead, playing dress-up and talking about toothbrushes and bread, pretending everything is OK.”

The play ends with the quick, devastating ring of an alarm. Suddenly, Pricilla’s storyline is uncertain. She could be waking up to an alarm clock with her daughter at home and her mind intact—or a nursing home caretaker could be buzzing at the door. Kemp’s talent as a playwright is on full display in “Dream a Little Dream:’' a masterful portrait of loss, retreat, and a mother aching to feel needed by her daughter.

Editor’s note: Kambi Gathesha, GS ’23, is an editor at Spectator. He was not involved in the writing or editing of this article.