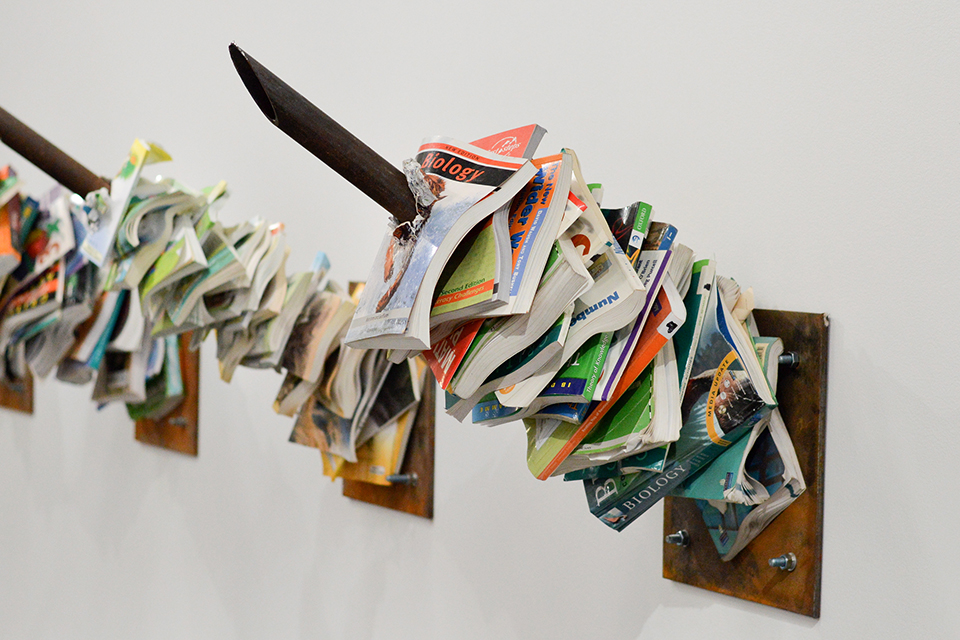 Entitled "A Selfless Act," this series of sculptures is displayed in Hongbo's 2016 exhibit "Textbooks" at Chelsea's Klein Sun Gallery .

Think of the very first day of classes in elementary or middle school. It's difficult to forget the excitement of the beginning of the school year, with a different set of classes and teachers, and, above all, a brand new stack of textbooks. Chinese artist Li Hongbo evokes a very similar feeling in his art installation "Textbooks," on view through Feb. 16 at Klein Sun Gallery in Chelsea.

Thousands of textbooks are stacked in every corner of the gallery, all in different formations: as paper sculptures, as towers on top of desks, as a path curving along the gallery floor, and, most notably, hanging from the ceiling inside huge binder clips.

Yet in this installation, Hongbo means to convey much more than the excitement of returning to school. By juxtaposing textbooks from two different countries—the United States and China—Hongbo brings to light the effects of textbooks, language, and diverse pedagogical systems on students. The exhibit unearths themes of cross-cultural engagement and the editorial choices underlying the creation of popular textbooks. These issues are directly relevant to the educational experiences of Columbia students from China, both with respect to their prior education and to their Columbia experience.

The largest, most imposing sculpture of the exhibit is called Soaring Through Clouds, Stumbling Through Fog. It is constructed out of a winding path of oversized binder clips that hang from the ceiling, each one holding a variety of American and Chinese textbooks, mirrored by a trail of books along the gallery floor. Several individual textbooks are also suspended from the ceiling, resembling birds. Altogether, the installation resembles a traditional Chinese dragon flying through the sky.

Ying Qian, an assistant professor of Columbia's department of East Asian languages and cultures, describes this sculpture's name as a translation of "riding in the clouds" in Chinese, a phrase typically used to describe how dragons move. Qian notes that the name can also mean "ungrounded," as if the knowledge in the textbooks was elevating students above the clouds.

Qian, who completed elementary, middle, and high school in China, recalls the excitement she felt on the first day of school when taking home a new set of textbooks at the beginning of the year. To her, the new books represented stories and opportunities for knowledge.

Yet, at the same time, she admits to having a love-hate relationship with her assigned textbooks, one she sees reflected in Hongbo's art. She remembers completing rote exercises for exams, relying more on memorization than analysis.

"For the exams, at least when I grew up, in history there are very few essay writing, very few exploring questions on your own," Qian reflects. "It's often giving you paragraphs from the textbooks."

Qian's observation was also shared by Chinese students who explained that, in their experience, textbooks, while they conveyed new knowledge, were associated with a certain brand of rote learning. Chelsea Jiang, a junior at Columbia College who grew up in Beijing, had such an experience.

"The teacher will spend, at least for me, they spend like a class right before the final exam, and he would just you know take out all of your markers, and I would tell you to highlight which parts in the textbook and you just memorize them," she explains. "And the exams, those will be fill in the blanks, and then you could just fill in the blanks. So if you memorized the whole book, you definitely could get a pretty good score." 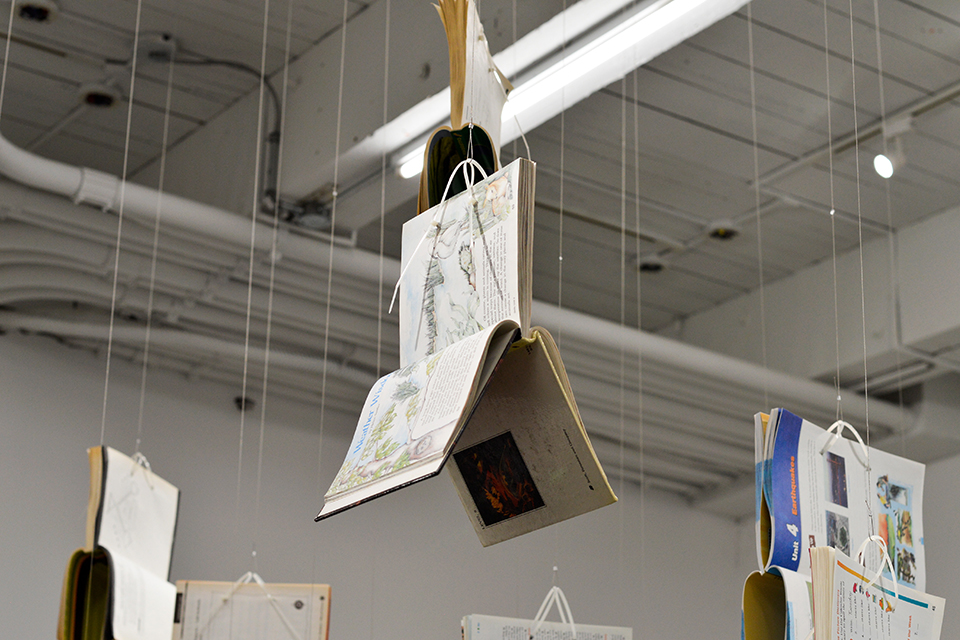 While pedagogical methods vary from province to province, Qian believes the dual nature of textbooks will always be based on the simultaneous possibilities and restrictions inherent in their use.

Qian says that the symbolism of the swooping dragon proves her point about this duality. "The hanging birds and the dragons speak of aspirations and the freedom you could feel reading and learning from these textbooks."

"But at the same time also, actually, there is the disciplining in the paper clips and the threads hanging the birds, so in the end, there's also immobility and fixture in it."

Hongbo's exhibit brings up the question of whether textbook language, through the propaganda or the distortions present in educational materials, presents a way to keep students immobile or fixed within certain imposed notions, fitting Qian's analysis of the dragon sculpture. In his artwork, Hongbo contrasts the educational materials of both China and the United States, using both kinds of textbooks throughout the exhibit.

Walking along the path of textbooks below the hanging paper clips, I looked over familiar titles: The Living Environment, Building Life Skills, Foundations for Algebra, along with countless Language Arts practice books. While I couldn't immediately decipher the Chinese titles, Qian helped me with translations through pictures. We spent some time discussing Thought and Politics, a required class for high school students in China. This specific textbook is Cultural Life; the photo on the cover of the textbook shows the national Olympic stadium in Beijing.

"This is a staple in the courses," Qian says. "There's always going to be a 'thought and politics' kind of class." At the elementary level, the course is called Ethics and Society and is about morals and socialization.

On the top left corner of these textbooks, which are mostly standard across public schools in China, there is a label that reads that the book has been approved by the National Secondary and Elementary School Textbook Approving Committee.

"The cover art that I remember is either nationalistic, you know, about national unity and things like that. Or they are about modernization, having kids thinking and writing and then like a satellite and then like a rocket or something like that," Qian says.

The continuous presence of this standard morality course is one of the outstanding differences between Chinese and American pedagogical materials, of which there are many. Columbia students who have grown up in China note some of the differences between the educational philosophies.

Yuxuan Mei, a first-year at the School of Engineering and Applied Science from Nanjing, China, says that the textbooks she used in high school in China and those she has encountered at Columbia differ fundamentally in how they present educational material.

"After I entered college, I feel like the textbooks I have … sometimes have those kinds of blocks of interesting knowledge or that kind of thing, so that when I read the textbook it will not feel boring or very dry," she says. "But Chinese textbooks kind of just put knowledge on the page, so it's kind of hard to continue to read textbooks for a long time. Textbooks here are more interesting to me."

Students like Mei, who attended elementary, middle, and high school in China and receive their college education in the United States, also encounter differences in teaching styles between the two countries. Mei brings up her University Writing Class this semester, for example.

"I guess there's kind of a lot of differences—for example, the UWriting I'm taking this semester. In China, if teachers are going to teach students how to write, they will talk a lot about techniques that you should use. But here, we're kind of just not limited by the knowledge teachers want to impart. Instead, we write ourselves and teachers offer comments." 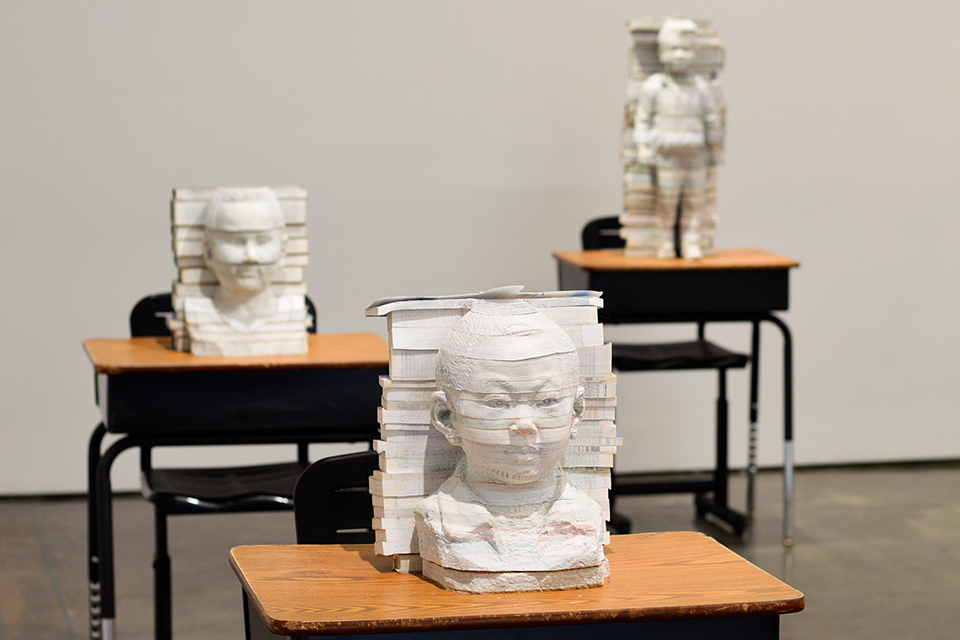 Yet students present varying opinions on whether these differences actually affect their mindsets when it comes to learning the material.

Jieya Astrid Chen, a visiting student from Nanjing University, says that she thinks the power of textbooks to shape a student's mentality is limited.

"I don't think students will necessarily be misled by textbooks, at least not in the environment of my own education." She adds that, at least in her experience, she didn't necessarily allot as much effort to required classes, referring to the required textbook, Cultural Life, as one she did not take so seriously.

She does, however, excitedly describe her history courses during high school. She enjoyed reading excerpts from The Twenty-Four Histories, a collection of history books that includes records and accounts of Chinese history from 3000 B.C. up to the 17th century.

Chen characterizes her high school's atmosphere as one of intellectual freedom, a claim echoed by Mei of her own high school.

One set of Hongbo's pieces, five sculptures made of stacked English and Chinese textbooks that have been carved in the shape of student busts, seems to allude to the point that Chen and Mei make about the open-ended nature of their education. The sculptures notably differ from Hongbo's other sculptures in their rugged ends, a stark contrast to his usually polished constructions. Propped up on old, battered desks, they form unfinished busts, still in the process of being molded and shaped.

"It's very ambivalent what [Hongbo] wanted to say [in the exhibit]," Qian comments, noting that nowadays, students have access to a plurality of sources and do not depend so much on textbooks as in the past.