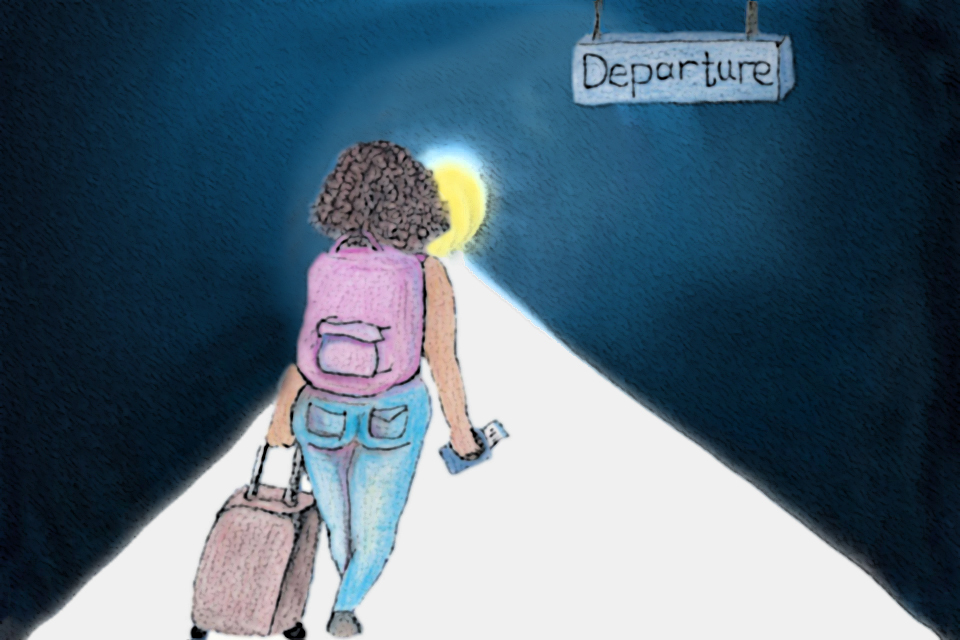 Three years ago, as 16-year-old Alex Kissilenko watched the clouds give way to a city from a plane window, she felt the thrill of anticipation as the interweaving streetlights slowly unveiled themselves in the darkness below. She was just like any other holidaymaker landing in Granada, Spain—except she was alone.

"I can distinctly remember driving from the airport … this restlessness. Just every kind of blood vessel in your body vibrating a little bit, your eyes looking out the window, trying to soak up everything around you," she describes.

Now a Columbia College first-year, Kissilenko has traveled solo four times since then. Her travels ranged in location from Ecuador to Bulgaria and, most recently, California over winter break. For her, that initial voyage to the south of Spain was a trip that she absolutely had to make alone.

"I'm a huge Hispanophile, Spain enraptured me. … It was important for me that I do it alone because it was about the relationship I had with that place. It was a deep-rooted passion, and being there with someone else … would've taken me out of the experience," she says.

Columbia is an international campus that provides study abroad programs dotted across the globe and funded overseas travel experiences to facilitate student exploration. But solo travelers like Kissilenko are still few and far between. And for good reason: For most, traveling solo is hardly a spiritual calling.

As Hannah Zhang, a junior at Columbia College, explains, she fell into solo travel by accident. She was about to embark on a trip with a friend, and their itinerary had been fully planned out.

"My friend ended up bailing on me," she recalls with a chuckle. "A lot of people who know me know that I do a lot of crazy things, but I'm one of the most paranoid people alive."

It is, perhaps, this very spirit of wild adventure that has been crystallized into the image of the young solo backpacker, although the dynamics behind this have rarely been unpacked. It calls to mind journeys to locales both exotic and urban; yet more often than not, we approach solo travel with an unconsciously gendered lens. Zhang says that other people frequently feel compelled to comment on her solitary excursions.

"I definitely get asked, 'Well, you traveling with your boyfriend?'" For Zhang and many others, if you mention a female traveling alone, the idealized image of the wanderlust traveler becomes one fraught with danger.

Even as a seasoned solo traveler, these practical concerns are not lost on her. "As a woman, yeah… sexual harassment, it's a thing. There are definitely concerns, but overall?" she shrugs. "In a sense, [the stigma surrounding solo travel] is more for people who haven't necessarily experienced it."

Yet, it's inevitable that the desire to experience traveling alone is especially fraught with social pressure for young women. Francesca Lubbock, a Barnard senior, took time off school at age 19 to travel to Italy. She was very conscious of the complications that traveling alone as a woman entailed.

"I went by myself, as a female. It was intimidating. But I was really ballsy, and I never felt anything could've happened to me." She describes the shock of arriving at 1 a.m., seeing guards in the airport carrying AK-47s. "It was so late, I was nervous, and I was inclined to go with one of these people aggressively trying to take my luggage from me."

Lubbock admits that solitary travel carries some risks. "As a female and as a young female, it can be more dangerous. It can be disheartening as well. … There's a huge benefit with traveling with two or three females, or a male, which I'm begrudged to say."

But this hasn't stopped the voracious traveler from embarking on solo trips. Thus far, Lubbock has traveled everywhere from Pakistan and Egypt to Germany and Italy on her own.

"I don't know if 'stigma' is necessarily the right word. … I think there's danger and things to be cognizant of," she allows. To her, it's about "listening to your gut about what feels comfortable and what doesn't and not being afraid to assert yourself."

Kissilenko agrees. "I don't know if there's necessarily a stigma around it. I know there's concern, especially for women, as far as self-protection goes. That was something that crossed my mind a lot," she admits. At her father's encouragement, she prepared by training herself in krav maga, a self-defence system developed for the Israeli Defense Forces.

While some, like Kissilenko, are primed for the solo travel experience, Zhang dismisses the notion that solo travelers fall into a certain personality type. "I know there are some solo travelers who literally genuinely want to travel alone. I'm not that kind of person, but that's cool too."

After that first solo trip, however, Zhang took to it instantly. "My interest in traveling really started when I got the chance to go out and travel by myself." Now, she chalks her traveling preferences up to sheer logistics. "I don't like coordinating trips with other people. When I travel with other people, I tend to rely on people a lot. … Now, if I want to go somewhere, I just go."

Indeed, for many there's something wondrously novel—even romantic—about being in a foreign place alone, but Zhang has her fair share of horror stories. She recalls being stranded in Tibet, caught in a rainstorm so powerful it cut the electricity. Most shops had shuttered up for the night.

"I found a rickshaw, but the driver didn't speak any Mandarin. I literally had to point him the way back, and I wasn't even sure myself." Zhang's experiences are the stuff oftravel nightmares, and it undoubtedly takes a good dose of gumption to overcome that.

Particularly for college-aged students, the reactions to solo travel are predictably varied, straddling the line between apprehension and encouragement. "My dad was really supportive and excited, my mum basically cried for hours," Lubbock laughs.

Kissilenko's friends were appalled. "They just thought that it was scary, honestly. A lot of my friends wouldn't imagine doing something like that." Thankfully, she had the support of her parents. "My parents for sure had concerns about me being young, being a woman, but at the same time, they recognized that it was important for me to stand my ground and kind of embrace my courage."

Lubbock agrees that confronting the challenges of traveling alone was an important moment for her independence. "I really need my autonomy, at the end of the day. This may sound callous, but sometimes I find people are anxious about traveling, and it's initially frustrating," she sighs.

This self-sufficient spirit has been labelled independent at best—and lonely at worst. Some would balk even at the idea of spending lunch alone in a crowded Ferris. But even if it means contending with the occasional solitude, these three student travelers prize the experience of traveling alone.

"Sometimes I feel antisocial," Zhang admits. "I'll think, 'What do I do if I don't meet anybody?' Social anxiety kicks in, but then I'm always proved wrong."

As Zhang discovered, companionship can be found in the unlikeliest of places. Recently, in Peru, she befriended fellow backpackers at a hostel and ended up sharing her first experience trying a guinea pig dish. "You're free to do whatever you want. … When you travel with others, you can't do that."

Lubbock says that this fear is usually unfounded, especially if students take it upon themselves to make connections. "When you're traveling alone, people make more of an effort in making connections with you." She describes it as "a great way to really force yourself to be immersed in the culture."

Coming from a college campus, where the preoccupation with social relationships is almost obsessive, traveling alone can seem counterintuitive. Perhaps the desire to travel alone is itself a product of cultural socialization.

While Kissilenko hails from just outside New York City, her parents grew up in Bulgaria. "Traveling alone and just starting at a young age is very common in Europe," she explains. "[My parents] felt I should have that experience as well, because it helped them grow into who they were."

She concedes there is some truth to the stereotypical fear of being alone. "I think if you do long-term solo travel, you're going to experience loneliness once in a while. But I think just being aware of that, and being OK with that … you're going wake up the next day and there's going to be a whole city of people. It's kind of on you to put yourself out there."

At the same time, Lubbock acknowledges that solo travel may not be for everyone. "I think it depends on your temperament. I love the company of others, but I also love making new friends. That transition is very exciting for me."

As a self-professed adrenaline junkie, Lubbock reminisces over her time spent in the Bahamas diving with sharks and exploring coral reefs in the middle of storms. "I think because I was experiencing it by myself, it felt spiritual. It's a really great time for reflection and getting to know yourself."

She shrugs. "I just enjoy it. I like adventure. … I love new cultures, exploring different ways of thinking, different ways of being. From culinary experiences to social decorum … I just find it all very humbling."

Be it for reckless adventure or awe-inspiring discovery, travel is more than hopping onto a plane and seeing the sights. It entails stepping out of a comfort zone, careful planning, and expecting the unexpected.

Zhang has become accustomed to the occasional mishap. "If things don't go the way that I planned, I get really upset. But I feel like when I'm traveling alone … that part of me just goes away. Because I'm deeply aware that I can't control it. If a flight is delayed, it's delayed. And so I become more alert, but also more aware."

For Kissilenko, this heightened sense of self is what drew her to traveling alone in the first place. "For me, traveling solo is a way of embracing my most organic self, by stripping away the identities of my daily life as a student, as a daughter, as a sister. You're not tied down by all those other labels, because all you are is just another traveler making their way around."

Lubbock feels traveling alone is ultimately more about the freedom. "I wasn't looking for a clean slate, or a tabula rasa," she explains. "My agenda was entirely my own."

"It was incredibly empowering," Kissilenko enthuses. "Like even today, when I feel the need to reaffirm my sense of independence and freedom, I will take a trip." And although she claims some of her most profoundly impactful friendships have been merely "a week long," she is thankful for each one, fleeting as they may be.

"They're just as much a part of who I am … because I feel I'm a different person when I'm out there."

And when it comes down to it, all three students agree that traveling alone is worth it, whatever the challenges. "I think it makes a difference to be self-reliant, independent, assured," Lubbock explains. "You just need to be smart about it."