Snacks on a Plane: An Introspective Journey

Snacks on a Plane: An Introspective Journey 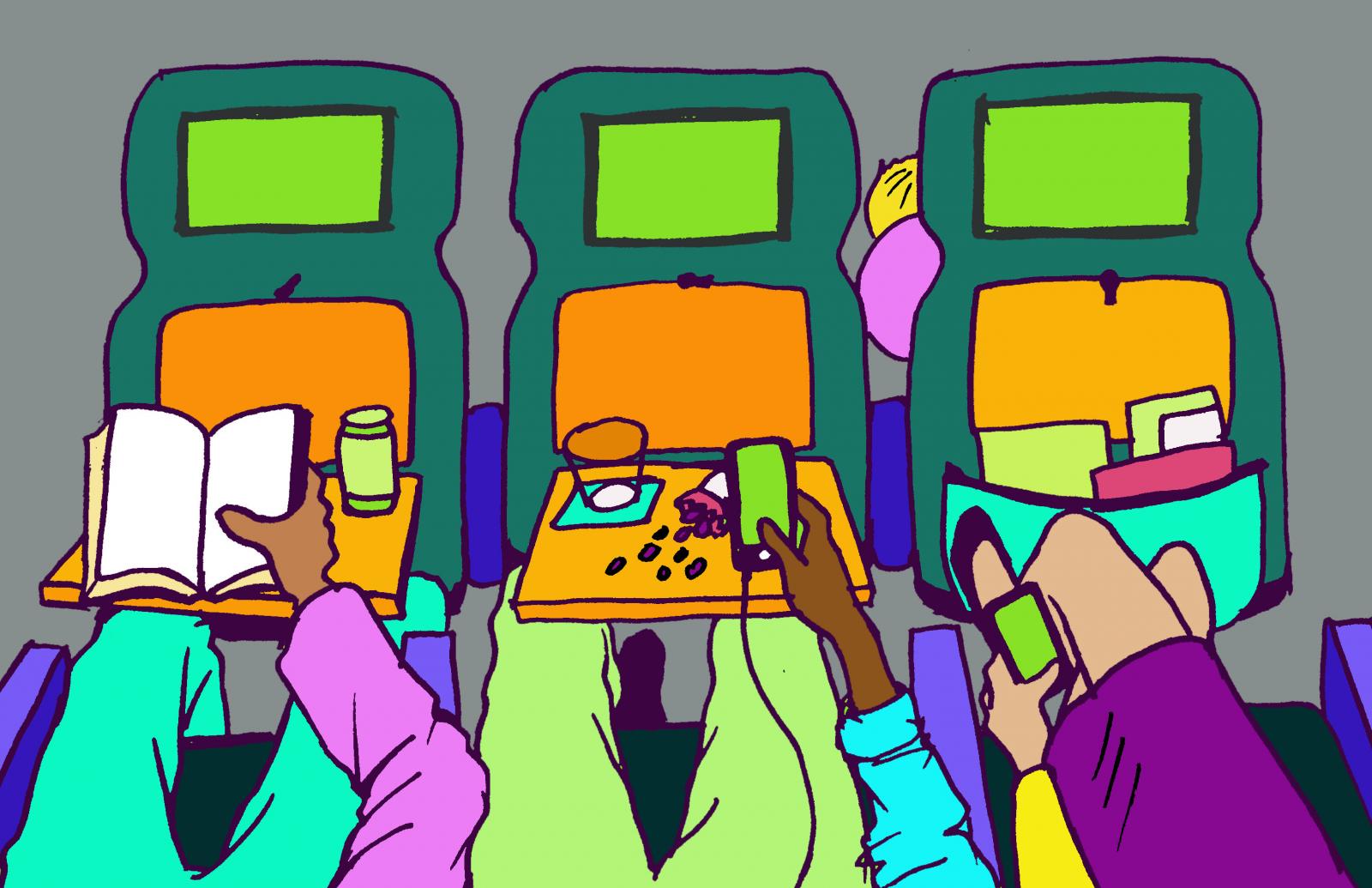 One minute and 32 seconds into the first of my two flights, it dawns on me that the man in the aisle seat is hitting on the woman in the middle. He has a face that would fit perfectly over a cardigan, satchel, and skinny jeans; she, the distinct air of the European Solo Traveller™ (not to be mistaken for just any European individual who happens to be travelling alone, although there is some overlap).

Squeezed into the window seat, I have a front row ticket to this spectacular exhibition. He tells an uninteresting anecdote, she laughs for a little too long. She tells a long story, he smiles and nods and says, "I know, I totally agree."

The plane has taken off, and there's nothing I can do to stop it from trudging through the wet sky to crispier waters of New York, but I check for my belongings anyway: passport, phone, wallet, I-20 (here, Americans), the small knot in my stomach. All good.

I wake up for food. "And would you like anything to drink with that?"

The answer is this: Most airlines set their drinking age to that of their base countries; for the Emirates airline, it would be 21, same as that in the United Arab Emirates. In practice, of course, their flight attendants don't give a shit.

The last time I was on a plane, on my way to Singapore at the start of winter break last month, I watched the first half of season one of the sitcom Black-ish. It's a fascinatingly funny intersection of class, race, and all the worst parts of Modern Family.

I pick the season back up at episode 14. I can't seem to get into it: The screen seems much smaller, my right leg can't stop shaking, and the knot is starting to feel just slightly tighter, denser. But that's still not quite it. The show is just not as funny as I remembered.

Layover. On the bridge between the aircraft and the Dubai International Airport terminal, I spot Aisle not moving with the crowd; he's waiting for Middle, looking a little sheepish and a little lost. Wildly daring—and maybe, slightly cute.

Dubai International Airport is how I know that the Cold War is over and that capitalism has won. DXB stands sprawling and tall, a giant middle finger to Marx. The huge airport is littered with the most elegant stores, the most lavish displays, and Starbucks.

DXB is also unmistakably a layover airport. Regardless of the time of day, sleeping bodies are sprinkled over it, wherever there is space. On chairs and in cafes; between travelators (yes, really) and on the X-ray machines (no, hyperbole). There is a sleeping cafe at DXB; they charge about $20 per hour for a bed. The knot in my stomach and I walk past it enviously, and I recognize the unmistakable rubber band ball density it has now acquired. I dream of the day I can walk in and say, "Yes, I am willing to pay exorbitant amounts of money for your mattresses."

All flights into the USA come with their own second security check and the rule that you are not allowed drinks onto the flight even if they have been bought after the first one. I begrudgingly throw my Frappucino away. Flight #2.

There is a cricket match on: India versus Australia, in a game that we (India) are almost destined to lose. I expend some of my 10 MB of free Wi-Fi (I love you, Emirates) to keep checking the score.

Not even Hillary Clinton can throw away a lead as spectacularly as the Indian cricket team. As I continue to follow the game on the 8.1 MB I have left, I watch us—as my dad would say—snatch defeat from the jaws of victory. I didn't realize how badly the knot in my stomach needed us to win.

Room has brought me to my knees. Brie Larson is fantastic. She has yanked the knot to a dense point, but in a surprisingly cathartic way. Although, perhaps, the immensely claustrophobic film about a woman and her son locked in a tiny room for the entirety of his life was a bad viewing choice when levitating in a tiny box about the Atlantic Ocean.

Knots are easy to untie. A floor lounge with people around you; sleepy Ferris meals with the friends who are back; Netflix in a blanket—while you still can, before the reading descends. The untying of knots happens quickly, and before you know it, the breath is no longer being squeezed out of you. Left alone and unaddressed for 30 hours, though, the knot begins to marinate. It becomes stickier and slipperier, like a sprat in a pickle jug.

I cannot sleep. My right leg has not stopped twitching. Everytime I shut my eyes, my leg begins to move more violently—vibrate, almost. This restlessness is conducted up my legs and into my stomach, and from there up, slipping in between the rib cage to my lungs. I can only think of one thing: This neck pillow is an absolute ripoff.

I am Middle on this flight. Window, to my left, seems to be marathoning through the Marvel film playlist. Like their writers, she doesn't seem to be paying much attention.

Aisle, to my right, alternates between reading a book, reading on her tablet, and watching films on her screen. Regardless of what she's doing, she seems focused. Watching her, I am almost inspired to do some of my own work. Luckily, I suppress that notion quickly.

Taking on the mantle of Middle is hard—I disturb Aisle every time I need to pee (which, in a 14-hour flight, is a lot of times) and I have to move for Window also. Earsets and foldable tables connect us to the seat backs in front of us and so every time we move, pondering Tyler Durden's age old dilemma, there is a knot of wires, limbs, and cutlery.

I really like Justin Bieber's new album. Not just "Sorry" and not just "Love Yourself"—the entire thing. I quickly create a haphazard playlist of guilty pleasure artists—him and Ed Sheeran, basically—and let their soothing, beautiful voices whisper in my ears as I fall asleep. I hope that even knots can't resist Ed Sheeran.

For some reason, the NYPD is on our flight; they briskly escort two people off. As they step out, the flight releases a collective breath and sound returns to the dead silent plane. I look outside; the knot needs movement to begin picking at it. It hasn't snowed all winter in NYC, but it is snowing outside now.

plane singapore snacks Do I Look Like A? eye issue six 2016