Is Moore Always Better? Modern Architecture on a Classical Campus

Is Moore Always Better? Modern Architecture on a Classical Campus 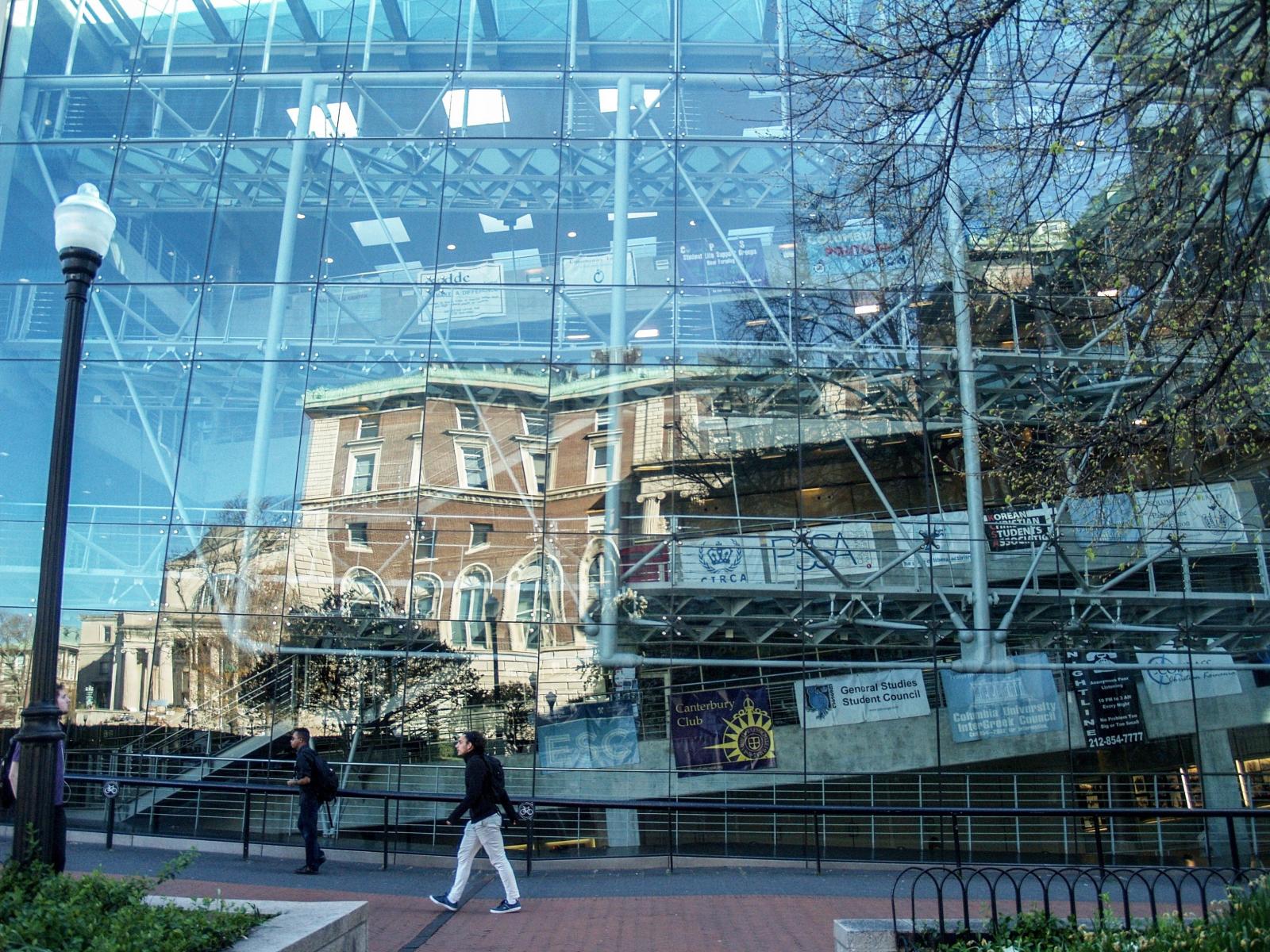 The evening of March 31 was like any another warm spring evening. With the temperature finally above 60 degrees Fahrenheit, students walked in packs in front of Butler Library, occasionally stopping to chat with friends or lie down on the lawns. What was rather unusual about this scene, though, was the group of students sitting on the concrete foundation in front of Butler, beyond a circle of caution tape.

The sit-in demonstration, organized by Columbia College first-year Chris Bolton and junior Jason Reid, was intended as a protest against the impending installation of British sculptor Henry Moore's Reclining Figure in front of Butler.

Since the installation of Reclining Figure was first announced on the blog of Columbia University Libraries/Information Services, a series of op-eds and letters to the editor have been published in Spectator, reviling and defending the University's decision to install the sculpture.

As a result of student backlash, Columbia College Student Council passed a resolution on April 11 urging the administration to reconsider the installation of Reclining Figure, citing a survey in which 90.3 percent of student respondents preferred the sculpture to be either installed in another location or removed entirely.

Reclining Figure is a mass of bronze measuring more than 10 feet in diameter and bulging in several different directions. Like many of Moore's statues, it's an abstraction of the female figure: bulbous, contorted, and struggling to pull itself free from the earth. It's this heavily abstract quality that has incited debate among Columbia students, and which attracted international media coverage in outlets including the New York Times and The Guardian.

Columbia's relationship with the artist himself dates back decades. In 1983, Moore visited Columbia and gave his approval to the construction of the Henry Moore Sculpture Reserve at the Harriman campus, a historic manor then owned by Columbia in upstate New York, but the building has since passed into private ownership.

The University's plan to install the sculpture in front of Butler has sparked intense controversy within the student body, with much of the debate centered around the sculpture's modern style. Bolton is also concerned with the sculpture's prominent location. He highlights the space between Butler and Low Library as essential to the University's heritage and connected to Columbia's central philosophy.

"The landscape that we have here serves as testament to the core principles [on] which Columbia was founded," Bolton says.

"The Core Curriculum that started in the early 1900s was thought of as a way to pay homage to our intellectual ancestors—the progenitors of modern philosophical thought. To bring too much modern art and too much of the philosophical underpinnings that go along with it—or even postmodern art—would at some point undermine the idea behind the Core."

Columbia's Manhattanville campus, scheduled to be completed in 2030, strikes Bolton as a better location for Reclining Figure and future installations of modern art. The first of Columbia's buildings in Manhattanville are set to open this fall.

"I honestly see there to be a sort of elegance to putting a Henry Moore in Manhattanville when we have one here in Morningside [Three-Way Piece No.1: Points]," Bolton suggests. "I think that would even pay homage to the artist—to have two of his pieces spread across the two different campuses that Columbia will have well established in the next 10 to 15 years and have vibrant lives of their own."

Bolton contends that the more futuristic aesthetic of the Manhattanville campus in some ways mirrors the aesthetic style of works such as Moore's sculptures. With a plan designed by prizewinning Italian architect Renzo Piano, the new campus will most likely take on the glassy façade of Piano's other notable projects, which include The Shard skyscraper in London and the New York Times Building in New York.

Although Piano's work earned him a Pritzker Architecture Prize in 1998, students have beenvoicing their discontent with modern additions to Columbia's Morningside Heights campus for years. 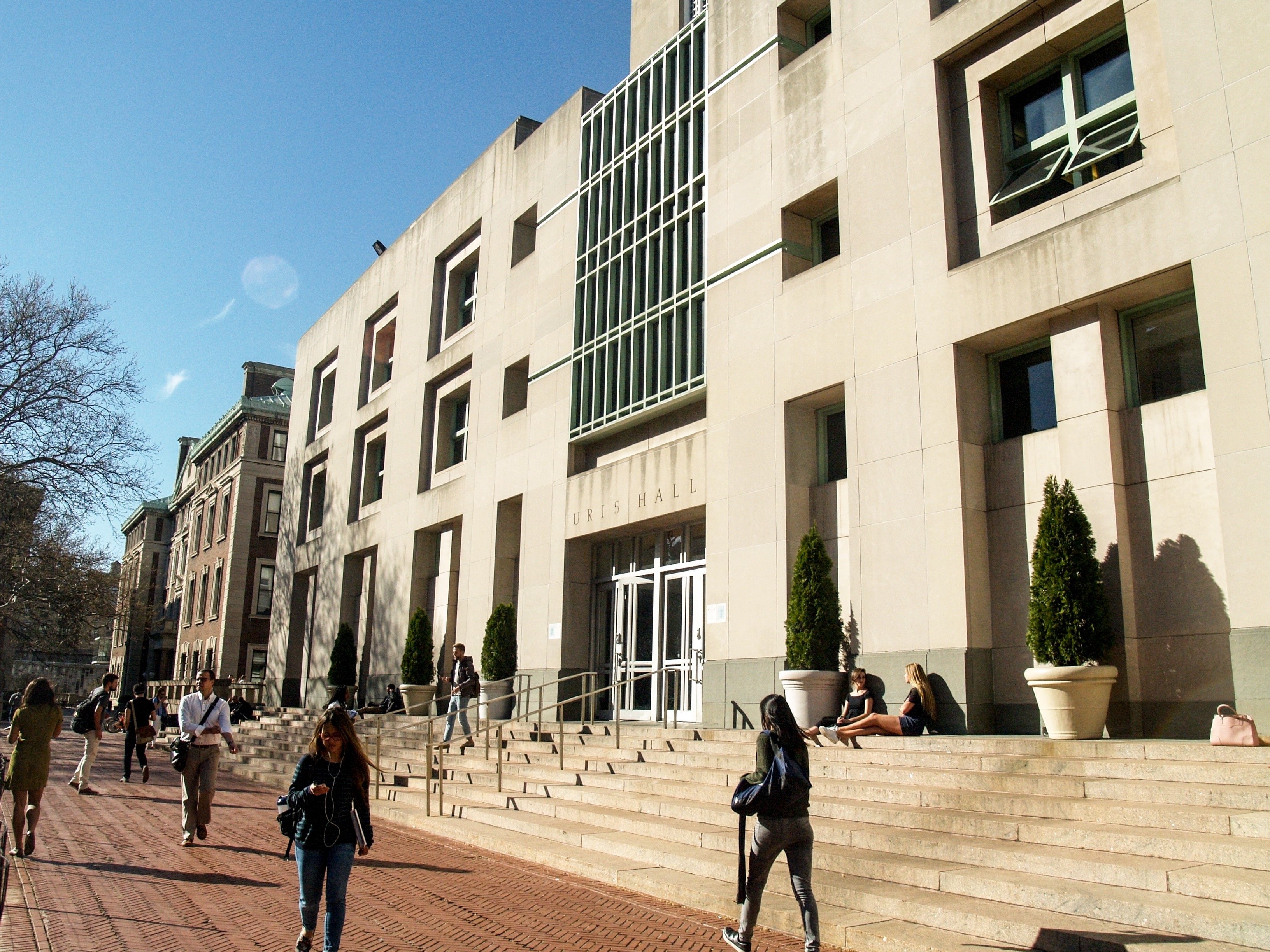 This history of student opposition to new pieces of campus architecture dates as far back as the construction of Mudd and Uris Hall in the 1960s. In fact, when Uris was completed in 1961, students at the Graduate School of Architecture, Preservation and Planning picketed with signs saying "No More Uglies," comparing Uris to an already much-maligned Mudd.

Perhaps the most conspicuous addition to the Morningside campus was Lerner Hall, in 1999. In a 1999 Spectator article, Christine Prokopick, who graduated from Columbia College in 2002 and was a member of one of the first classes to experience Lerner, compared the structure to "a crooked picture you just want to reach out and fix."

Despite accolades from publications such as the New York Times and the Wall Street Journal, Lerner's initial collegiate occupants found the new student center strange, sterile, and difficult to navigate. The same article quotes Kirsten Malonoski, who also graduated from Columbia College in 2002, and Kate Miltner, a 2003 Barnard graduate, criticizing Lerner for appearing "half done" and "still under construction," respectively.

A staff editorial published in Spectator on April 25, 2007, aptly named "Another Eyesore: New building will disrupt campus aesthetic," argued points uncannily similar to those which Bolton and Liss et al.'s op-ed made against Moore's Reclining Figure.

Predicting that the new Northwest Corner Building would be "a gaudy monstrosity" akin to the "oft-ridiculed Lerner, Uris, Carman, and Mudd halls," the editorial criticized the administration for failing to communicate with the student body and being insensitive to historical context of the original Morningside campus designed by the architectural firm McKim, Mead & White in the late 1890s. It called for the University to experiment with the Manhattanville campus instead.

"The Morningside campus, however, is too small, too compact, and far too historically valuable to experiment so wantonly with stark contrast and architectural excess," the Spectator editorial concluded. "Instead of kowtowing to au courant architectural fads that will be repudiated and forgotten in a decade or two, the administration should make a long-term investment in its campus."

But the alleged incompatibility of new structures with the aesthetic of campus may not have been the original purpose of the administrators who oversaw their construction. Then-University President George Rupp originally intended Lerner's notoriously inconvenient ramps to evoke a "hi-tech version of Low Library steps on a spring day," according to a Spectator article published in 1999. 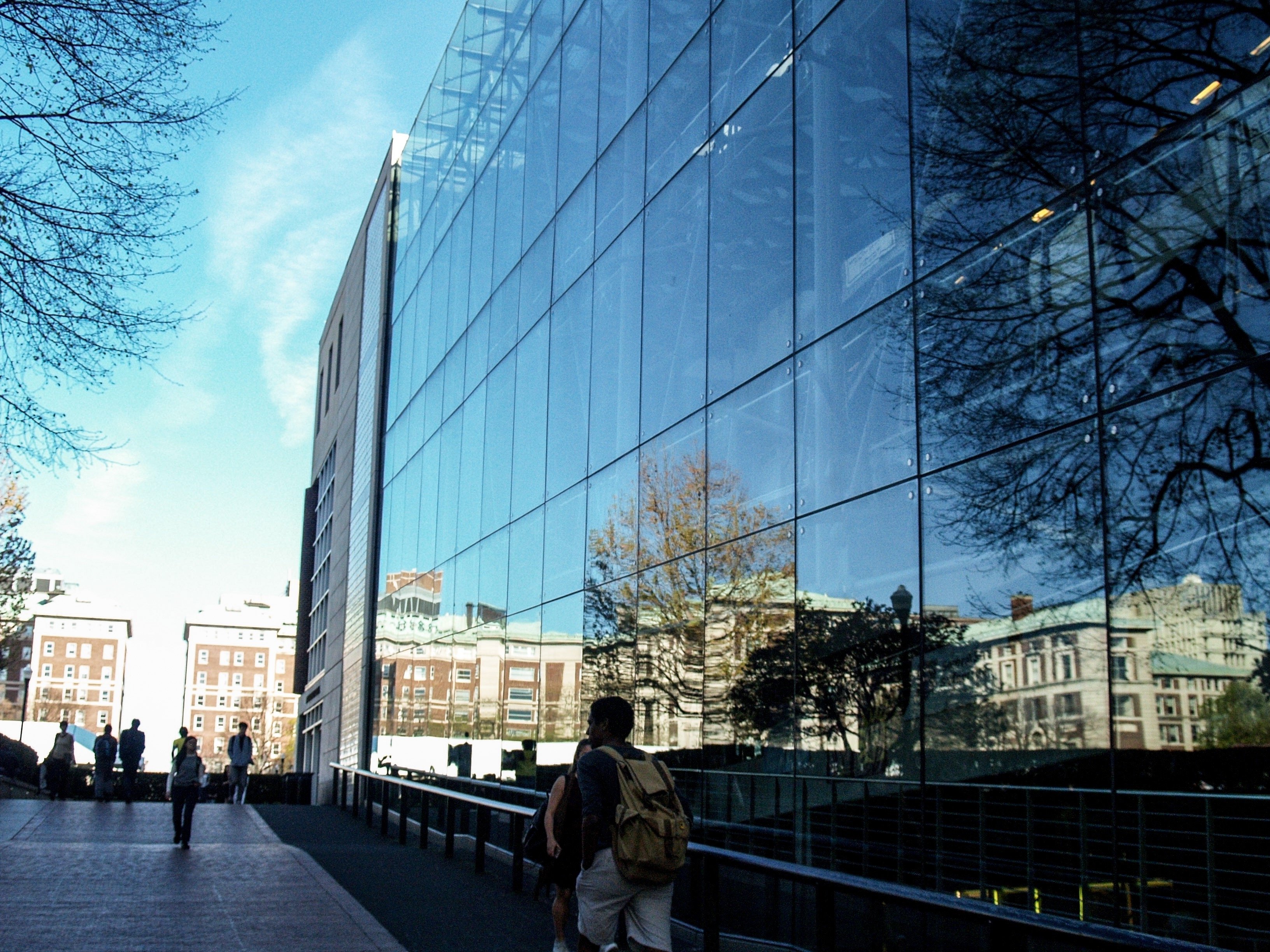 "The best thing that Columbia is doing in both the campus and the Core is adding—rather than substituting, or changing, or taking things out, or replacing them with new things," Bolton acknowledges with regard to the newer architectural constructions such as Lerner, the Northwest Corner Building, and the Manhattanville campus.

Jerry Sherwin, who graduated from Columbia College in 1955, anticipates that the installation of Moore's Reclining Figure may also have this additive quality. Years have passed since his undergraduate education at Columbia, and he has seen objections to modern constructions come and go; he acknowledges that the campus will continue to evolve.

"It's not removing anything, not really," Sherwin points out. "It's just an addition to the campus as far as I consider."

Moreover, modern updates may not be such a radical concept at all. McKim, Mead & White's hallowed campus was never intended to be perfect or even complete. "It's a master plan—it's not a finished design that has to be respected forever and could never change," says Barry Bergdoll, an art history professor at Columbia. 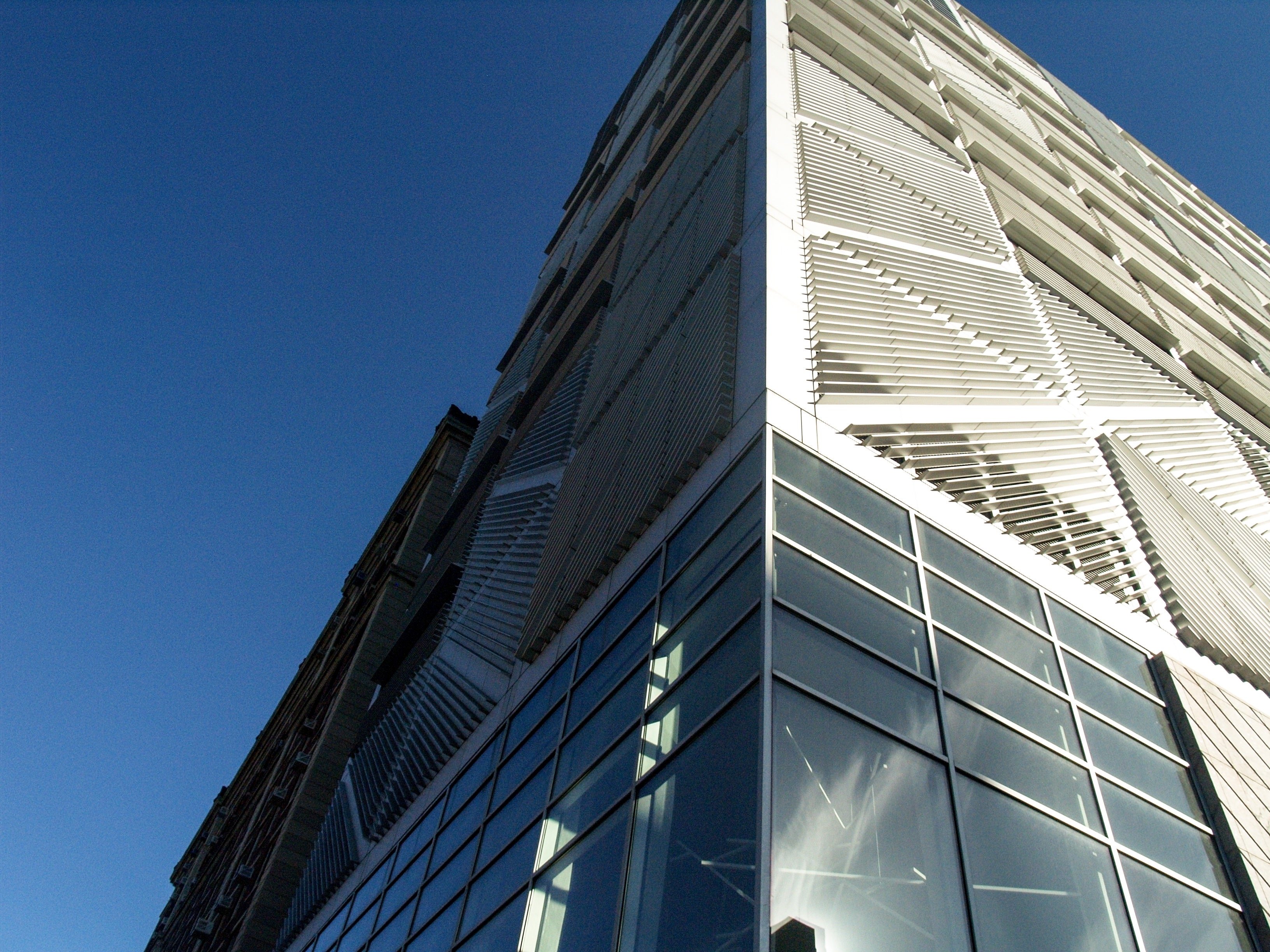 "The plan is a document that grows with the institution over time."

Ultimately, the extent to which the Morningside Heights campus can change is limited. After all, it only spans across 36 acres. Regardless of whether it is appealing or not, there are practical limits to housing art in New York City.

"I think there's always the danger that the McKim campus will become too dense," Bergdoll says.

To what degree the campus will integrate modernist architecture and art will remain the subject of student debate for the foreseeable future. Public art like Moore's sculpture has less of a responsibility to provide practical functions than buildings like Lerner, but Bergdoll and Sherwin maintain that students should have a valid voice in decisions on campus aesthetics. Sherwin is attuned to what he sees as the reality of inevitable backlash.

"How do you progress?" Sherwin wonders out loud. "When you do something creative—whether it's architecture, or advertising, or things like that—you're going to have people who are opposed."