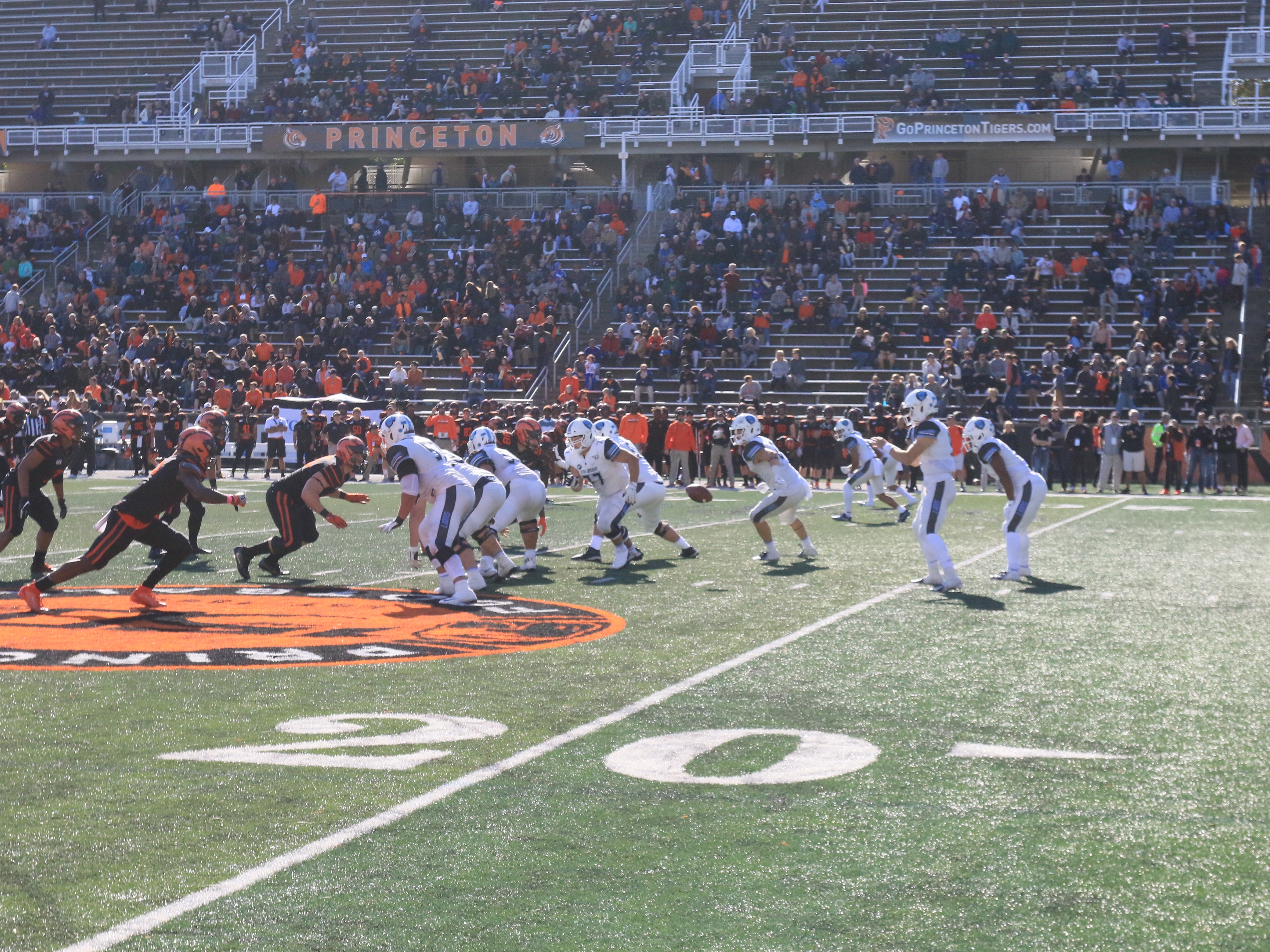 Junior quarterback Josh Bean went 23 for 29 for 187 yards and a touchdown in Columbia’s 21-10 loss to Princeton.

In its first conference game of the season, Columbia fell to defending Ivy League Champions Princeton 21-10 as the Lions’ offense was only able to score 10 points for the second consecutive game.

The loss gives the Lions a losing record for the first time since the 2016 season and provides them little margin for error for the rest of the season if they hope to win their first Ivy championship since 1961.

Despite the loss, head coach Al Bagnoli was encouraged by the team’s performance this week.

“Obviously I’m not happy with the loss, but I thought our kids played really hard on the road against a really good team, really explosive team, and they had chances,” Bagnoli said.

Early on in the game, it looked as if the Lions would capitalize on those chances more than they had during last week’s 24-10 loss to the Georgetown Hoyas. Junior quarterback Josh Bean, in particular, came out firing on all cylinders after a lackluster start to the season.

Despite being unable to find the endzone in the first two games of the season, Bean’s first touchdown pass of the year came as the result of a miscue by the Princeton punt-return unit. With senior Drew Schmid back deep to punt the ball in the second quarter, Princeton’s Will Johnson got called for running into the kicker, which gave the Lions a fourth-and-1, which they converted on a run by sophomore running back Marquavious Moore.

After a 1-yard run for loss, the Lions only needed three plays to go 47 yards downfield. Bean put together his best string of throws this season. The third-year signal-caller started with a 6-yard pass to senior wide receiver Ronald Smith. He then found senior tight end Rory Schlageter for 17-yards in the middle of the field for a first down. From the Princeton 24-yard line, Bean found Smith in single coverage, and Smith jumped over the Princeton defensive back to bring the ball in before scampering into the endzone for a touchdown.

As soon as Smith saw the defensive formation, he knew he had a chance to score.

“I knew that they were in one high so I basically had single coverage to my side,” Smith said. “And from that point, it’s just a go-and-win type of play. No scheming. Just make a play. That’s all it is.”

Unfortunately for the Lions, this drive accounted for almost all of the offensive production on the day as the offense failed to score a point in the second half. However, this was not due to a lack of opportunity. Two chances in particular will haunt the Lions when they go back and watch the tape from this game.

With the Light Blue down 14-10 at the start of the fourth quarter, first-year placekicker Alex Felkins lined up for what should have been an easy 33-yard field goal. Felkins had already nailed a 51-yard attempt in the first quarter of the game to become the first player in program history to kick two field goals from beyond 50 yards.

However, the attempt was blocked; instead of kicking off to the Tigers down by 1, the Lions gave the ball back to Princeton with its four-point lead still intact.

Just plays later, on second-and-10 from the Princeton 31-yard line, Princeton quarterback Kevin Davidson dropped back to pass and uncorked a short attempt to Andrew Griffin in the flat. Junior safety Ben Mathiasmeier, who picked off Davidson on the third play of the game, got a great jump on the play and had two hands on the ball but dropped what could have been a pick-six. Despite what that play could have meant in the game, Mathiasmeier is trying not to let it affect him going forward.

“Just make that play nine times out of 10,” he said. “Learn from it. Not going to keep my head down and just go to the next one. Next game mentality.”

Regardless of whether Mathiasmeier catches that pass the next time he gets the opportunity, the Lions understand that the most important thing for their success going forward is finding ways to score on offense.

“At the end of the day, you got to be able to score more than 10 points,” Bagnoli said. “I think that goes without saying in today’s football.”

Columbia is now 1-2 and will play Central Connecticut State at Wien Stadium on Saturday, Oct. 12 at 1 p.m.