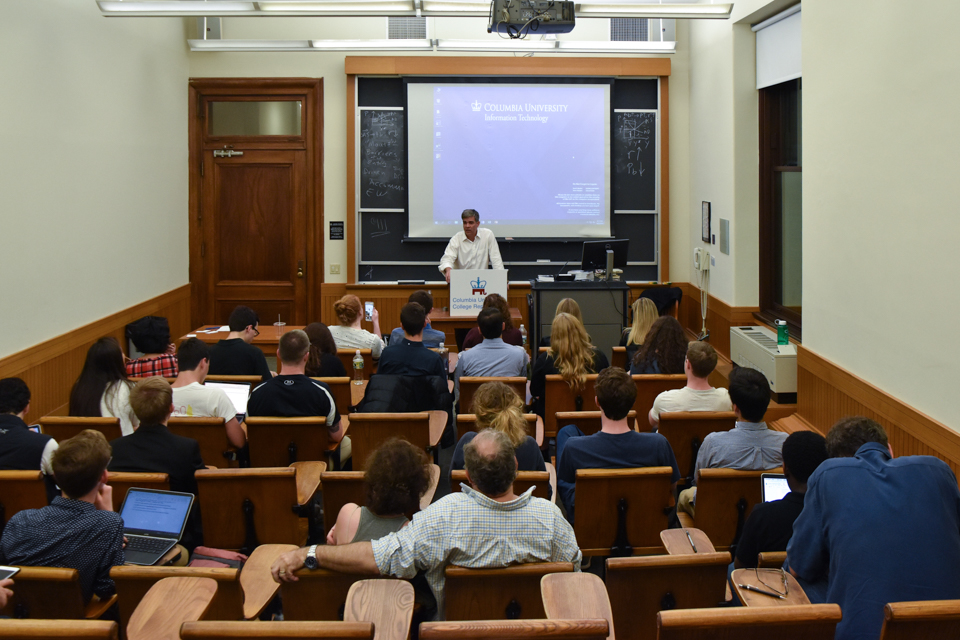 In his speech, Kemp advocated for the traditionally conservative policies of small government and market solutions but called for greater collaboration and unity across the aisle.

Jimmy Kemp, political consultant and son of 1996 Republican vice presidential candidate Jack Kemp, spoke about how to shift modern political discourse toward being more collaborative and bipartisan at an event hosted by Columbia University College Republicans (CUCR) on Tuesday evening.

In front of an audience of roughly 30 people, Kemp mainly spoke about his father—former Buffalo Bills quarterback and New York Representative and Secretary for Housing and Urban Planning and vice presidential nominee Jack Kemp—as well as about his views on the Trump-era political climate. Kemp advocated for the traditionally conservative policies of small government and market solutions but called for greater collaboration and unity across the aisle, which he said is lacking in current Republican party leadership.

“I grew up around family members of Democratic members of Congress,” Kemp said. “These men and women socialized, they knew each other as human beings, not merely as political opponents … and while they competed on the ideas of the day, they were not enemies.”

Kemp’s speech focused largely on the legacy of his father, who passed away in 2009. Jack Kemp was responsible for creating so-called Opportunity Zones, which call for the removal of the capital gains tax on investment in rundown communities. This policy, which the younger Kemp lauded for its bipartisan nature, was later incorporated into the Tax Cuts and Jobs Act of 2017.

The event was then opened up for audience questions. A tense exchange ensued between Kemp and a graduate student, who expressed concerns about immigration.

“We don’t have a border anymore. … Illegals murder Americans every week,” he said. “Nothing is done, nobody cares. You can walk right across [the border], nobody cares. There’s no wall; we voted for a wall.”

Kemp repudiated these claims as untrue, but said that the questioner was entitled to his own opinion.

Kemp concluded by underlining the importance of being open to discussion and honest about personal principles. He wanted Republicans to do more to support minorities and stated that using market solutions to improve their lives will lead the Republicans in the right direction.