Why they came to celebrate the life of Peter Awn

Why they came to celebrate the life of Peter Awn 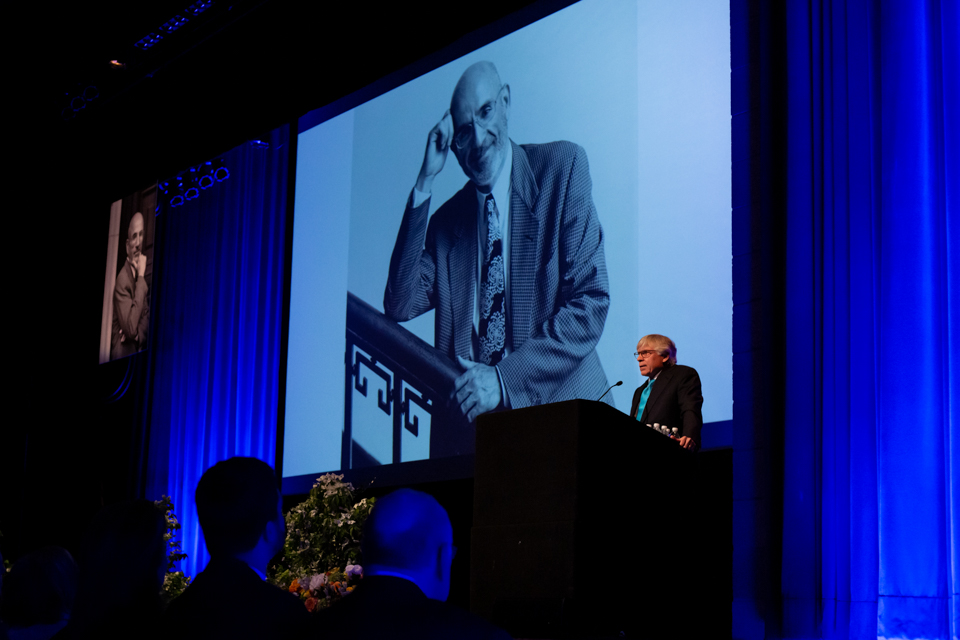 Awn died at the age of 75 as a result of injuries sustained during a car crash while walking home from campus on the evening of Jan. 25. He remained in critical condition at the Columbia University Irving Medical Center until his death on Feb. 17.

While Charles McNamara had limited interactions with Awn during his time as a lecturer in Contemporary Civilization, McNamara said he felt Awn’s impact through his students and colleagues.

“[I’m here] just to honor the way Peter Awn was so important to people, even though I didn’t know him really well myself,” McNamara said. “I know how important Peter Awn was to people who worked in the School of General Studies, how important of a mentor he was to a lot of students who found that extra support really impactful in the way that they have their lives at Columbia.”

“I felt compelled to come because the least I could do was show my appreciation,” Dilia Introini, GS ’17, said. She worked with Awn through the Warrior-Scholar Project, a veteran guidance program whose collaboration with Columbia was initially coordinated by the former dean. “It didn’t really matter who you were, or where you came from. If there was any way he could provide some guidance or support, uplifting words, he would do that. He did that for me throughout my time here at GS as an undergraduate, and he continued to do that in supporting my job now because he believes in our veterans and he knows representation matters.”

“Oftentimes, he would have something important to do and he wouldn’t do it to spend more time with you to be able to resolve what you’re going through. That personal attention and the kindness that he has shown over the years really compels people to not just like him but to aspire to be like him,” Nick Gupta, GS ’20, said.

Annie Cardelus, GS ’91, met Awn at an alumni event. She wore pink and grey striped socks in honor of his style. “He was just funny, charismatic, energetic. [He] loved General Studies—he was a community builder. I’m here to represent the community he built,” Cardelus said.

Awn, Joan Arnold, GS ’72, said, influenced her to trek across the world through their conversations. Though Arnold did not know Awn personally during her time as an undergraduate, she met eventually him at an alumni event. “I just love Dean Awn. He was the one that interested me to go to the Middle East, Morocco, and Turkey,” Arnold said.

David Owen, GS ’05, GSAS ’06, built a relationship with Awn when the dean advised him through his project on medieval Sufism. Awn, who studied Sufism and eschatological ideas in Islam, also taught Owen in a graduate seminar on Sufism.

“[I didn’t keep in contact] as much as I wish I had. [When] I reached out, he was very warm, very encouraging,” Owen said. “He was someone who also knew how to give tough love. It’s not to say that it was all sort of flaky affirmation, but I was fortunate to have his feedback at every stage of that project.”

Michael Susi, the assistant vice president for academic affairs for the Faculty of Arts and Sciences, worked with Awn toward providing benefits for LGBTQ faculty and staff during his early years at the University.

“Awn was right there in the very beginning, back in the mid-’90s, before [gay] marriage was even a thought. They called him in for every gay- and lesbian-related [policy], so for a long time, he was the face of the gay and lesbian faculty here at Columbia,” Susi said.

Prior to the car crash, Awn’s family and coworkers had never met or even spoken to each other, as the former administrator chose to keep the two spheres of his life separate. At the ceremony, Awn’s relatives and friends at Columbia commented that while they had lost a beloved figure, they were finally brought together to understand the full scope of Awn’s impact on those around him.

For Trevor Dines, GS ’20, Awn was not only one of the first people he met at Columbia, but also the professor of one of his first classes: Literature Humanities.

“He was so sweet, and he always could make you feel like [the] only person that mattered to him in the moment that he was talking to you,” Dines said. “He would wear this vest, I don’t know how to describe it, it was just the funniest thing to see somebody wear in contrast to all the suits and formal attire that professors usually wear, this bright red and brown vest walking around.”

“When you come across Dean Awn, you’ve come across something unique, like those socks,” Jeffrey Omar Patrick, GS ’13, said as he rolled up his pants to reveal his striped socks. “When I first got here, Dean Awn took me aside and told me as soon as you graduate you’re going to be able to do whatever you want to do. He made me concentrate by putting my academic excellence up to par.”

After his time as an undergraduate, Patrick joined a GS alumni committee and enrolled at New York Medical College. “I can do anything I want,” he added, reflecting on his success in the past year.

For Souleymane Bachir Diagne, chair of the department of French and Romance philology, it was inevitable that his academic areas of study would overlap with Awn’s, resulting in an eventual friendship.

“I teach Islamic philosophy and Sufism so it was obvious that I would befriend Peter. He would very often refer students to me, ask them to come see me when they are walking closer to the philosophical side of Islamic intellectual and spiritual tradition,” Diagne said.

Derrick Wilder, GS ’05, said Awn was instrumental in his decision to return to school nearly 20 years after he graduated from high school. Prior to attending Columbia, Wilder pursued a career in professional dance and ran his own company.

“I was unsure if I wanted to return at school after starting a professional life, and after [a conversation with Awn], I was put at ease. People often say, ‘My door’s always open,’ and it’s just a saying. His door was actually always open no matter when you showed up. … He started to plant the seeds in how you could make a change in how you behave,” Wilder said.

“Having people in a big institution make you feel like you’re a part of it, regardless of where you come from and who you were, and make you proud of all those things that sometimes can be seen as something holding you back [was what Awn did]. He makes you flourish into who you are. ... He made GS be what GS is. He is the school, he is GS,” Ana Almanzar, GS ’07, said.

In her ten years at Columbia, Reyes Llopis-García, a senior lecturer for the department of Latin American and Iberian cultures, remembers how Awn would reach out to her and other faculty members in a way that she said deans typically did not. Awn asked Llopis-García to attend GS Class Day as a way to facilitate relationships between faculty and students.

“He contacted us personally and said ‘Hey, I would be really, really honored, and it would be really appreciated by our students, if you came to the Class Day for the School of General Studies.’ I almost always have been a part of graduation for GS, and he always made a point to say hello and ask me what had transpired during the year. ... I was very sorry to hear about his passing,” Llopis-García said.

The ceremony concluded with a performance by Howard Fishman and the Biting Fish Brass Band, who led the attendees out to a reception.