There's validation and worth in black women's rage

There's validation and worth in black women's rage 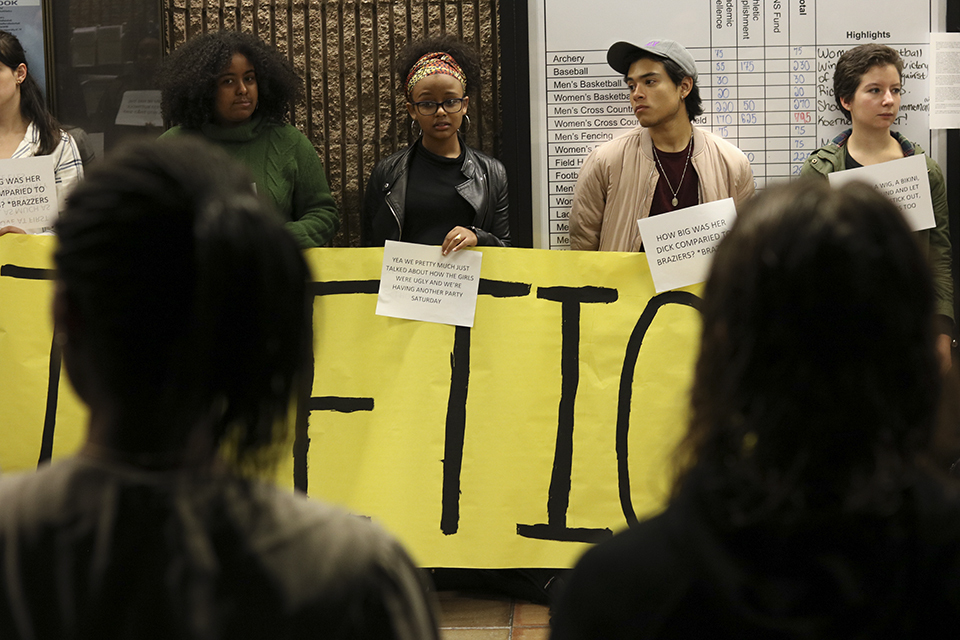 As a child growing up in the South, I saw KKK rallies in the local park and Confederate flags lining the roads on the way to my house. I endured the teasing of my white peers for not meeting the expectations of their racial stereotypes, for simultaneously and painfully being too black and not black enough. Where I'm from in South Carolina, it's hard to look around and not see how years of ignorance and prejudice have been manifested. My daily interactions were clouded by the prejudices built into Southern culture, and I often found it hard to navigate such a space without either compromising or conforming.

That was my reality, and while it was by no means acceptable, it was my sense of normal. Over the years, I have become desensitized to the hatred and bigotry that this world has to offer.

The homogeneity and hostility of my childhood environment strongly impacted my decision to apply to Columbia. I yearned for a place where one's intellect and character overshadowed any preconceptions of their race or gender. That is what I have found here; and after years of compromising self-love and self-pride for the sake of social survival, I can proudly say that my identity as a black woman has finally been allowed to thrive.

However, this newfound serenity did not fool me into thinking that the hardships of my previous life were over. So, when I read the lewd messages from the wrestling team's group chat, I was appalled but not surprised. I was angered but not shocked by the blatant transphobia, homophobia, and brazen misogynoir. To me, these messages provided a jolting reminder that no matter where I go, hatred for my identity will always exist—even in a seemingly safe and respectful space like Columbia.

As a black woman in this society, I often feel like my identity is taken for granted or abused, as if we black women somehow simultaneously offer too much and not enough to society. We are sensationalized and exoticized in the media, while our various contributions are exploited to the masses of non-black consumers.  People will pay thousands of dollars to obtain the semblance of our physical features, but only praise them on women of other races. Fashion designers will place faux-dreadlocks on white models, but won't cast black models for runway shows. People will criticize our anger during times of injustice, yet forget that we are on track to becoming the most educated demographic in America.

At Columbia, however, I am sometimes allowed to temporarily forget the cruelties black women face daily in the outside world. Upon stepping on campus for the first time, I immediately connected with so many black women and felt more pride in a mere matter of days than I had ever felt in my previous eighteen years. My first few weeks here somehow, briefly, made up for all of the years that I felt alone and destitute in my prior, predominantly white environment. I recognize that, for some, the representation of black women at Columbia may not seem adequate; but for me, it was (and is) everything.

So, reading those messages after months of being in an environment in which my identity flourished, I felt anger. Yes, I was angry at the messages, but I was mostly angry at myself for placing so much of my worth on the validation of extrinsic entities, such as the greater Columbia community. And I constantly kick myself for not deriving this sense of pride from the self-evident, awesome power of black women in general.

On this campus, and across the world, black women stand at the forefront of social and political movements involving injustices against all demographics; yet, somehow, we still seem to question the validity of our greatness and worth. We are the first to stand up for others and the last to be stood up for; but after seeing the outrage and mobilization of our campus in response to the exposed messages, I felt hope. I saw our anger—which for years has been stereotyped as an illegitimate part of our nature—recognized and validated by people from all intersections of life. And furthermore, I saw black women not rely on this validation and recognition for self-assurance and self-acceptance.

As black women, we shouldn't allow anyone on this campus (or in this world) to mandate our responses to instances of injustices. We are angry—and have a right to be—but in the face of the anger, in the face of the degradation, in the face of opposition, we still shine. We still get up and go to class; we still flex our vibrancy and beauty everywhere we go; we are able to stare into the face of the oppressor, sit in class with him, be his peer, and still survive.

We may at times neglect our self-care in the name of defending justice and obtaining triumph, but we still survive. We deal with instances like these, and far worse, on a daily basis, but we still survive. Because, as black feminist author Audre Lorde stated, "To face the realities of our lives is not a reason for despair—despair is a tool of your enemies. Facing the realities of our lives gives us motivation for action. For you are not powerless You know why the hard questions must be asked. It is not altruism; it is self-preservation—survival."

I urge my fellow black women at Columbia to channel their despair into determination. To use our anger to fertilize others' reluctance and make it blossom into a revolution. We must demand that our peers celebrate our victories, not exaggerate our victimhood, to show the nature of who we truly are: not weak, but warriors.

The author is a Columbia College first-year majoring in medicine, literature, and society on the pre-med track.