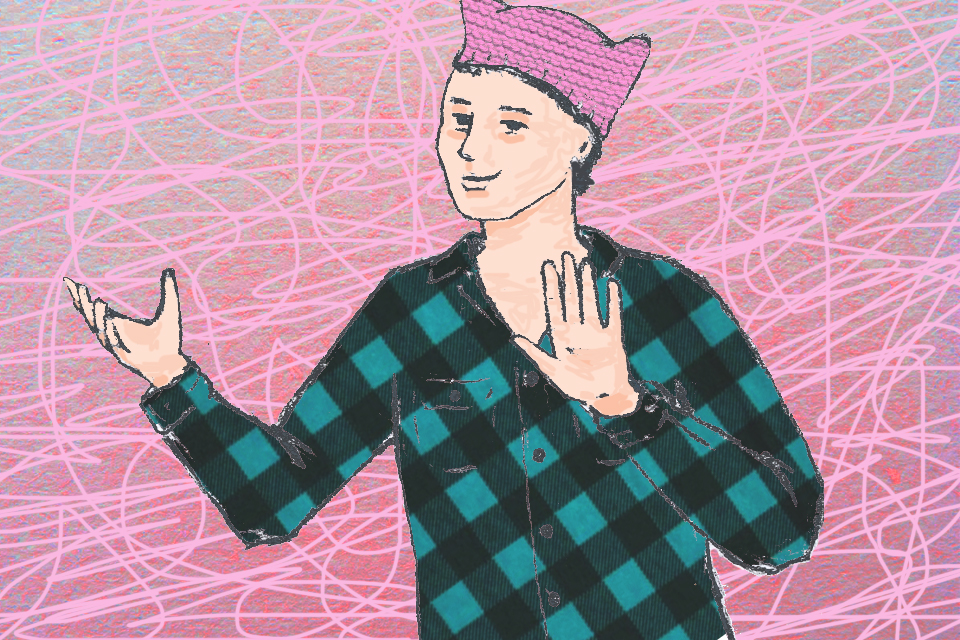 Recently, a group of friends whom I respect and consider to be torch-bearers of the feminist movement described me in sexually explicit, sexist, and, frankly, hurtful terms. I was angry, sure, but I was also deeply confused as to how this conversation was allowed to happen in a room of friends, of feminists.

Looking back at the incident now, I realize that I was lying to myself because this happens all the time on campus. My time at Columbia University has been a smorgasbord of sexist, racist, and islamophobic comments. The difference was that this time, I was the victim.

From the slut-shaming and sexist remarks toward a woman at 1020 to the more egregious proclamation from a male friend that he is “just not into Brown or Black girls,” I have heard it all—and I’m sure I have played my own part in its production. These comments and slurs are not common by any means, but they are still surprisingly prevalent among friends and peers who call themselves feminists, LGBTQIA allies, and Black Lives Matter supporters.

The same friends and peers, who are hyperaware of how sexism weaves itself into the humdrum of everyday life and wholeheartedly dedicate themselves to the gospel of gender equality during discussions about feminism just as easily throw the metaphorical Bible out the window after a few drinks and tell a vaguely sexist joke. They oscillate between going to the Women’s March on Saturday or a BLM protest on Sunday and later making offensive, offhand comments at the expense of these same marginalized groups.

Is this a simple lapse in judgement? Maybe. But perhaps it is something more insidious. Social psychology researchers Uzma Khan and Ravi Dhar have defined this problem as moral licensing: People are more likely to engage in discriminatory behavior when they believe they have established themselves as unprejudiced through previous actions.

Feminist. Liberal. Ally. We feel like we have established our unprejudiced behavior at Columbia: We ardently deliver sermons on feminism and allyship in classrooms, compose Aaron Sorkin-worthy monologues against the Muslim ban on Facebook, and proudly attend the Women’s Marches and People’s Climate Marches. These are all valid—I do not want to diminish the powerful potential of these activities to help push us toward a more equitable and just society.

But somehow, we have adopted these nouns and made them our personal Achilles’ shields, detailed with every phone call we made urging our congressman not to repeal the Affordable Care Act, hand-painted with the name of every feminist author we read, and intricately bordered with Instagram photos and Snapchat stories of us attending a rally for Planned Parenthood. We think that once we have established our progressive credentials, we cannot lose them. They become our moral license—an assurance of our liberal values, permitting us to forgo checking ourselves or our friends when they use problematic, politically incorrect, and hurtful language behind closed doors.

I think the problem hinges on this single point: We think of these labels as nouns which, once won, cannot be lost. We must reconceptualize these lofty nouns, the pillars of our liberal ideals, as verbs. Verbs mean action. We cannot simply call ourselves feminists or allies, but must commit ourselves to fighting. The concepts we fight for must transcend the ivory tower of academia and the streets we protest on to become a part of the more prosaic moments of our college experiences. We must integrate performative activism—attending marches on weekends and giving long-winded speeches in our CC classes—with the functional, everyday activism that takes places in between these disparate events in our dorm rooms, campus bars, and text messages. We must turn in our moral licenses to ever truly earn them.

Rekha Kennedy is a senior majoring in political science and Middle Eastern, South Asian, and African Studies. She is currently trying her very best to practice everyday acts of feminism and allyship. You can follow her on twitter @RekhaKennedy. Rekhannisance runs alternate Tuesdays.