Let the women in

Let the women in 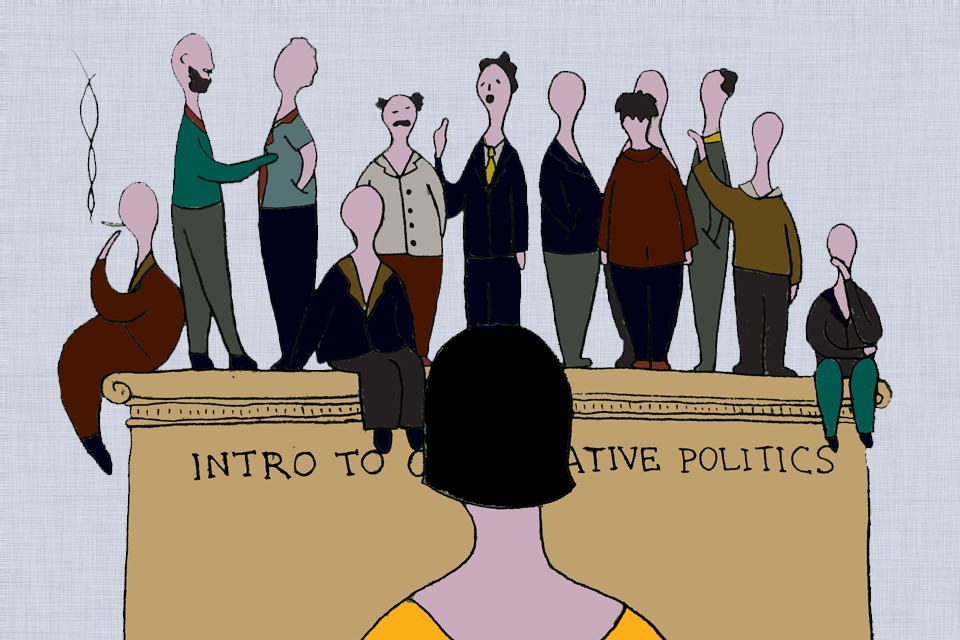 I was sitting in my Intermediate Latin II class when the professor pointed to the word “luctisono” in Ovid’s “Metamorphoses;” It was a hapax legomenon. A hapax legomenon is a term or concept that appears only once in an entire body of work. Do you want to know something else that appeared just once? A woman. Let me explain: Throughout the entire course load of my political science major at Columbia College (keep in my mind that I am a senior), I have read exactly one work written by a woman.

Intending to prove that this epiphany in class was not a figment of my imagination, I scoured my old syllabi from long-forgotten political science courses and discovered that I have, in fact, read exactly one piece written by a woman—in a Columbia political science course taught by a visiting professor. In the spirit of full disclosure, I must inform you that I have read many works by women in political science classes, but only at Barnard. However, the job of incorporating women into the curricula of the social sciences should not be relegated to female professors at a women’s college—it is a task that all professors must undertake.

I have read (okay, skimmed) thousands of pages of arcane political theory riddled with puzzling political jargon by pedantic political scientists. I can, with some confidence, describe to you the four different frameworks in which to investigate the dynamics between different nation-states, deliver a solid argument on the implications of China’s economic growth for the United States’ national security, and convince you that the United States used foreign aid as part of its economic statecraft during the Cold War. But I am ashamed to inform you that I learned none of this through works written by women.

Still, I did not blink when this year, yet again, I received another syllabus with no women on it. I thought myself immune to the gendered language I was constantly consuming—but that changed after a conversation with my roommate. Returning from my national security seminar, ranting on about America’s grand strategy in international relations, I was caught off guard when my roommate told me that I was using vocal fry.

Vocal fry is the sound of talking in a low register with a “rapid series of taps, like a stick being run along a railing” (Catford, 1964)—basically, think the Kardashians. However, it is more than a vocal fad—it is removing the high-pitched, feminine part of our voices. It mirrors the low-pitched, masculine voice we associate with authority. It’s been increasingly used by millennial women to seem smarter and more authoritative, like their male counterparts in their work places—in (and out of) their political science classrooms.

A second epiphany struck: Just like the characters of Ovid’s “Metamorphoses”—Daphne turning into a laurel, Arachne transforming into a spider, or Echo becoming a resounding voice—I, unable to locate a voice resembling mine in political science, underwent my own metamorphosis in thought and voice. My contributions in class were masculinized. In my underclassman years, I would intentionally avoid expressing sentiments often associated with women: peace and development. However, as my years as a political science major dragged on, I was not just policing my thoughts to conform to the male dominance of politics, but also my voice through vocal fry. I used it all the time to sound, well, smarter.

Now, the raison d’être of my vocal fry is not the lack of female authors in my political science courses, but it is a consequence of a larger trend of which political science is a part. Women are overwhelmingly undervalued and unheard in many subjects at Columbia (shoutout to the Core), and this only serves to reinforce the feeling that being important and “seminal” within a field is synonymous with being a male. A simple review of Columbia’s political science website shows that only 14 of the 48 professors are women—that is an abysmal 29 percent.

The social sciences like to claim parity between the genders, but the data doesn’t seem to support these assertions. However, this is a deeper issue than being taught by a female professor—it is bringing peripheral voices into the center, it is getting the same opportunity as my male peers to read and debate voices like my own. I want to understand the political structures that shape and dictate my life through more than the analyses of just half the population. And to those who argue that there are fewer women influential in the construction of political science, I would ask you to reconsider the parameters with which you define “influential.”

Consider the overwhelmingly masculinized sexual terminology used to describe technostrategy for nuclear security: “vertical erector launchers, thrust-to-weight ratios, soft laydowns, deep penetration.” These terms, concepts, and entire lexicons represent the body of politic through a male gaze and voice, which inevitably, implicitly—and sometimes explicitly—forces me (and probably you) to metamorphose to fit into this narrow narrative constructed by men. The inclusion of varied voices—like those of women and people of color—would make way for a broader range of ideas, views, and less Freudian terminology to describe nuclear strategy. In short, “historically influential” has come to mean “historically male,” but that doesn’t mean political science professors should not aim to broaden this limited definition—should not prevent unnecessary metamorphoses—through the inclusion of more female voices.

The glass ceiling has been broken by the brilliant works of political analyses by female academics. Now it’s time to let the women in.

Rekha Kennedy is a senior majoring in political science and Middle Eastern, South Asian, and African Studies. She prefers sweet potato fries to the vocal fry. You can follow her on twitter @RekhaKennedy. Rekhannisance runs alternate Tuesdays.