A remembrance of things past

A remembrance of things past 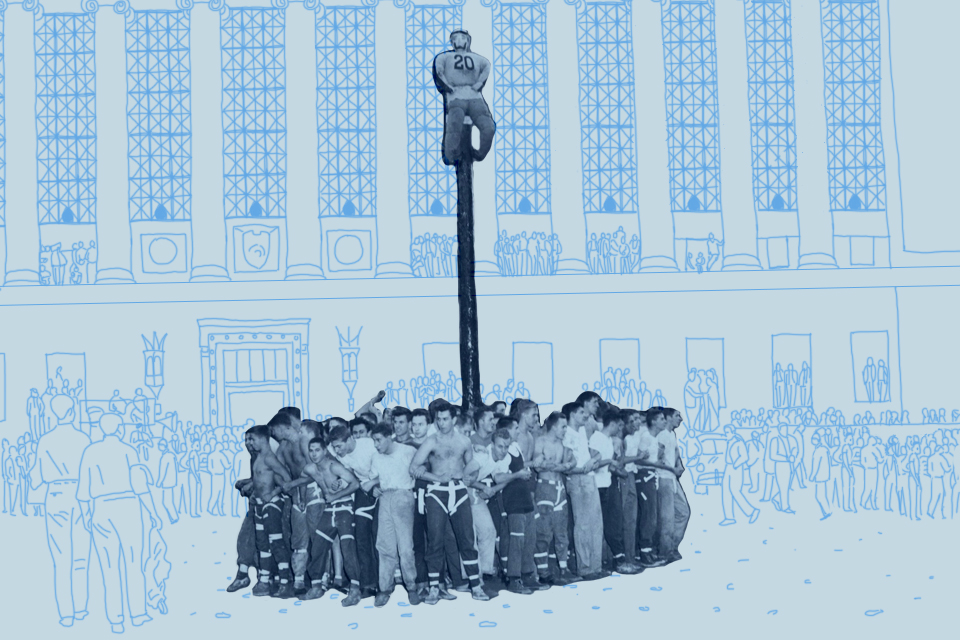 When asked to write about Columbia traditions that brought us all together, I was, at first, hard-pressed to think of more than just a few. There were many memories, of course, of my own personal involvement in activities and organizations that had their own, or those of Columbia College’s population as a whole. Much of what we remember and hold dear from those magical four years falls outside the definition of being part of a Columbia tradition and more into a category of shared experiences—specific to the time—so I hope that I will be forgiven for including both in what I am about to report.

When we arrived as fresh-faced freshmen some 650 strong in the fall of 1952, we soon discovered that there were many traditions that had been established over the years before our arrival in Morningside Heights which had helped those who had gone before us become the upstanding, reflective, and mature individuals Columbia hoped we would become. We were determined to do our part to continue these traditions and did so with enthusiasm and no small amount of pleasure and delight.

For reasons other than panty raids, we were fortunate to have Barnard just across Broadway. Unlike Yale or Princeton where one had to travel many miles to get a date, Barnard girls were able to offer female companionship across the street. But more so than that, they offered cultural events available nowhere else. Joint activities between the colleges included a “Barnard-Columbia Playday” which featured sports competitions, a picnic supper, and square dancing. Another Barnard treasure was the synchronized water ballet that had been a tradition for the past 17 years.

Although not exactly a tradition, the tearing down of the Barnard fence was an oft-recurring event. So it was no surprise when it was announced that Barnard's foreboding green fence, famous for its periodic destruction by Columbia undergraduates, was now being strengthened and enlarged. It was done according to one of the workmen to “prevent the boys from becoming too rambunctious.” The last time the Barnard fence was torn down by Columbia College students was in the fall of 1950 after the sophomore victory dinner.

As freshmen, we soon learned of the tradition called the Soph Frosh Rush. No one was sure when it began but it had become an established part of the bonding between freshmen and sophomores as long as anyone could remember. It took place on the “lawn” between College Walk and Butler Library and consisted of three events—a tug of war, a pushball event, and the greased pole challenge. As we outnumbered the sophomores, we won the tug-of-war easily. The objective of the pushball event—played with an inflated ball some eight to 10 feet in diameter—was to push the ball over the goal line of our opponent. That ended with a draw. 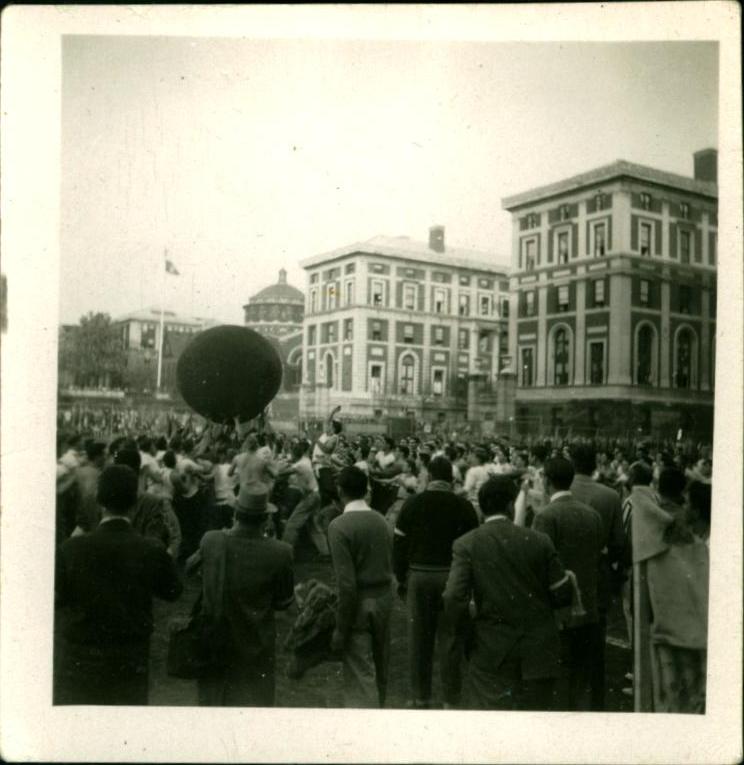 The main event involved a greased 18-foot pole planted securely in the ground with an effigy of a freshmen on top with a blue beanie on its head. The objective was for the freshmen to break through the sophomore line of defense that surrounded the pole, scale it and retrieve the blue beanie. Try as best we could, we failed to retrieve the beanie as just about every class before us had failed to do.

But before these events took place, another long-standing tradition had begun. It involved the kidnapping of freshmen by sophomores and was played under strict rules of engagement. There were two kidnappings of freshmen—one of which received national press coverage.

The tamer of the two involved Michael Goldman, CC ’56. It all began when two sophomores entered Michael's room, 427 Hartley, at 9 a.m. carrying a replica of a pistol that Michael believed to be genuine. They whisked him to a waiting car, blindfolded him, and left him in the midst of the Yale campus with 25 cents in his pocket. All worked out well, however, as Michael was able to contact friends at Yale who invited him to a party that evening. Enjoying his adventure by this time, he predicted that “the class of 1956 would reply with a vengeance.” If it did, I never heard of it.

The other kidnapping of a class of 1956 freshmen was reported by Spectator in its Oct. 24,1952, issue. The article reported that the wildest three days of pre-rush history was climaxed Wednesday by the abduction of Gordon Butler who was flown nonstop to Chicago on a nonscheduled flight.”

Butler was captured by Peter Douglas and Millard Graham as he was leaving the ROTC offices at about 3 p.m. and brought to the apartment of one of his abductors. There his mouth was taped, his hands tied, and his entire head swathed in bandages. He was driven to La Guardia airport where a one-way ticket to Chicago was purchased for him. Butler's appearance was explained by telling the airline officials that he had been horribly burned and was being sent to Chicago to see a specialist. In flight, he managed to free himself and upon arrival reported the incident to the Chicago police who arranged to have him returned to New York. This kidnapping made the New York Times and the Herald Tribune, as well as publications nationally.

When thinking of those traditions that survived over time that bound earlier generations of Columbia students to my own, it seems that most, if not all, have died out. I would suspect that today such things as the Soph Frosh Rush, Panty Raids at Barnard, and Sophomore kidnappings of freshmen would be considered childishly adolescent—which they probably are. And I'm sure that they would be frowned upon by the current administration. 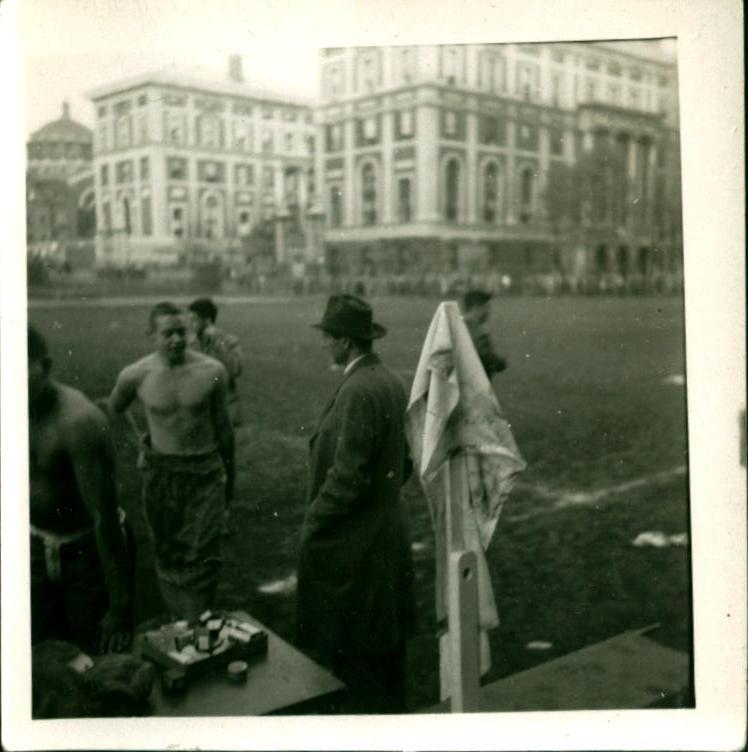 But what they provided were moments of playfulness that served as a much-needed counter to the academic pressures we were all under then, and as students are today. To be sure, my generation grew up in a much simpler world, and perhaps playfulness was a luxury that such a world permitted more than it does today. But being playful is not something to be regarded as out of place in such an austere institution as Columbia. In fact, it should be heartily encouraged.

And of course the one tradition that most permanently ties us all together is our academic one, our shared curriculum and educational experience.

When I look back over the four-year period that began some 65 years ago when I first entered Columbia, I remember it as one of the best periods of my life. It was a time of extraordinary personal growth when I was presented, whether I wanted to be or not, with new ideas that were often uncomfortably challenging. It was a time of positive, creative turmoil that on one hand excited my mind as it had never been before, but on the other often made me feel that I had completely lost the sense of identity with which I had felt quite comfortable before. However, when that four-year period was over, I left as a new person, built on a more solid foundation than the one I started with—a foundation that has served me well over these many years since graduation.

So, if there is any one thing that ties me and my fellow classmates to students of Columbia College today, and to the Barnard students who will always have a special place in my heart, it is that we have shared an educational experience that has prepared us for life as no other institution I know of ever has.

The author received his B.A. in philosophy and literature as a member of the Columbia College class of 1956. He received his M.F.A. in graphic design from the Yale School of Architecture and Design in 1958.

To respond to this op-ed, or to submit an op-ed, contact opinion@columabispectator.com.