No human being is illegal

No human being is illegal 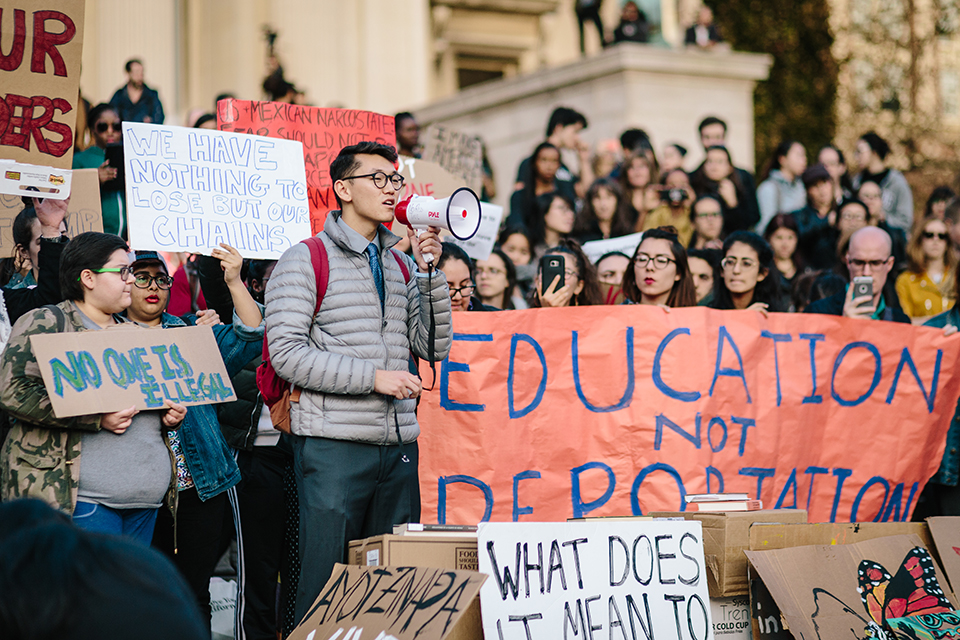 Since the presidential election in November, the Columbia community has mobilized to demonstrate its support for all of its immigrant members, particularly the undocumented students on campus. Undocu, formally called the Undocumented Student Initiative, remains very appreciative of this outpour of support. For us, the past couple months have been a showcase of horror with the increased reports of persecution, deportation, and detention in our communities. Some of us are still shocked by the realization that the country we were raised in and call our home is so committed to our marginalization and disenfranchisement. As we prepare ourselves and our loved ones for the absolute worst, we continue to take our commitment to higher education seriously and pursue ambitions that our undocumented status has yet to stifle.

In a country that looks to erase us, we grasp for a society that will recognize our presence and treat us like humans. We are regretful (but not even slightly reticent) to inform you that Columbia must do more to create such an environment.

Every student who joined discussions with Undocu reported attending classes in which the term “illegal immigrant” is freely used by students and faculty. This term is egregious and repulsive. It is used by the White House and government to evoke bigotry and intolerance.

We firmly oppose the use of the term “illegal immigrant” on the grounds that it was created to criminalize those seeking a better life, especially people of color, particularly those of presumed Latinx descent. The immigration discourse has reached extremes that include immigrant-hunting militia groups and VOICE, an agency created by President Donald Trump that allows people to report those whom they think are undocumented or criminal, which would, in essence, function through the profiling of people of Latinx descent. Despite the fact that statistics prove immigrants commit less crime than U.S.-born citizens, and are consistently jailed less, the term “illegal immigrant” is actively used by white nationalists to create the illusion of inherent criminality in any immigrant of color. As a matter of fact, Trump himself has used to term to describe Europe’s Syrian refugees.

Immediately after the election, we submitted a list of requests to the administration. Among those requests was the plea that Columbia develop instructional programs for its faculty on the appropriate language of the immigration debate. It seems to us that central administration has yet to develop or publicize any guidelines detailing how faculty should treat its undocumented students—rather, faculty members continue to use terms like “illegal immigrant.” It appears as though it has been decided that our visibility and our mere safety is entirely up to us.

To quote one of our members, there is trauma in retelling our story. Having to continuously explain the entire immigration system and our experiences as undocumented people to students and faculty completely ignorant of our situation is an emotionally taxing experience that can be at least mitigated by the proper use of terminology.

In light of LUCHA’s immigration week at Columbia, we demand that University President Lee Bollinger, in cooperation with the administration’s newly created DACA/Undocumented Students Working Group, instruct Columbia faculty to no longer use the term “illegal immigrant.” Columbia cannot be a sanctuary campus if it does not draw a clear line on the use of slurs by its community. We also demand that proper information on the immigration system be distributed to all levels of faculty and students through a guide that debunks popular myths with statistics, and that illustrates the mental health effects of the current immigration system on those that it impacts.

The day after the election, one of our members was hospitalized due to online and on-campus verbal harassment related to their immigrant status. Being undocumented takes a substantial emotional toll, and Columbia’s commitment to the improved mental health of its students should be reflected in the language its faculty and students endorse. We want to develop the proper arena for political discourse, but no discourse can be considered proper if slurs are used in the description of its participants.

The author is a member of the Undocumented Student Initiative, which is Columbia’s first formal group for undocumented students.