Honoring graduate unionization has become a matter of democratic principle

Honoring graduate unionization has become a matter of democratic principle 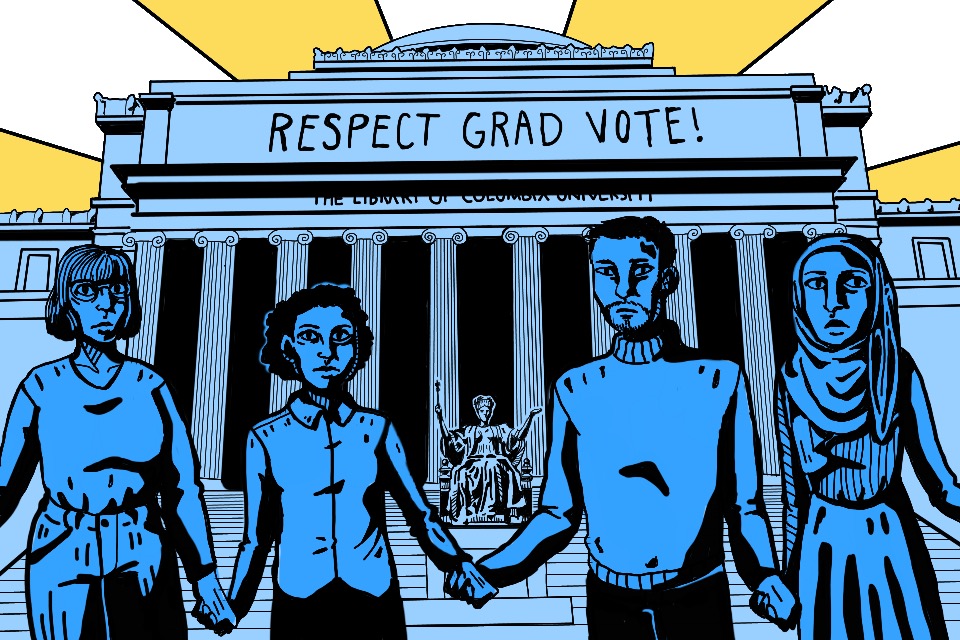 Last semester, in response to a landmark decision by the National Labor Relations Board allowing graduate students at private universities to unionize, Columbia graduate students took to the polls. In an overwhelming vote—1602 to 623—graduate students made the choice to join the Graduate Workers of Columbia-United Auto Workers Local 2110.

Since then, however, the University has challenged the vote by filing a statement of objections with the local chapter of the NLRB, citing misconduct at the polls—including possible voter coercion and tampered ballots. After a thorough investigation, the NLRB completely dismissed these claims, overruling all objections in their entirety.

One would expect, after a democratic voting process and a fair investigation into any possible prevention of such, the University would sit down and begin negotiations with the union. Instead, the University has filed objections with the national NLRB regarding the local NLRB findings, once again citing voter misconduct and claiming the regional board erred in its evaluation. Essentially, the University is indefinitely delaying negotiations that should have begun in December.

To make it clear, this is not a pro- or anti-union problem. Without a doubt, the decision to unionize is a complicated one, and one that has been debated on campus for many years by professors and students alike. At this stage, the issue has become one of honoring the democratic process and upholding the values of an institution that prides itself on democratic ideals.

It may not be immediately apparent how this continuing fight affects undergraduates—indeed, fewer than 3,000 people voted, and only a handful of them were undergraduate teaching assistants (who are also eligible to unionize). But the graduate students who made their voices heard are our section leaders, our graders, even occasionally our Core Curriculum instructors. We should care that our instructors are not getting the collective bargaining rights they overwhelmingly decided on, independent of our personal opinions about unionization.

Moreover, it seems fairly evident that the University is not acting in good faith. To challenge voter misconduct is one thing, but to draw out a process based on already disproven—and, frankly, weak—claims is to undermine a democratic process legally required by national law. The University will always be against student unionization for a number of reasons, but it cannot claim to “share the NLRB’s goal of ensuring a fair electoral process and protecting the rights of all students” if it does not honor the decisions stemming from this electoral process.

This has become a matter of democratic principle. The University should take care that its conduct as this matter proceeds will not just reflect its views on unionization, but its values as well. We urge both the student body and the University to think carefully about what comes next.

The authors are members of Spectator’s 141st editorial board. Jessica Spitz recused herself from contributing to this editorial due to her coverage of the issue.

To respond to this staff editorial, or to submit an op-ed, contact opinion@columbiaspectator.com