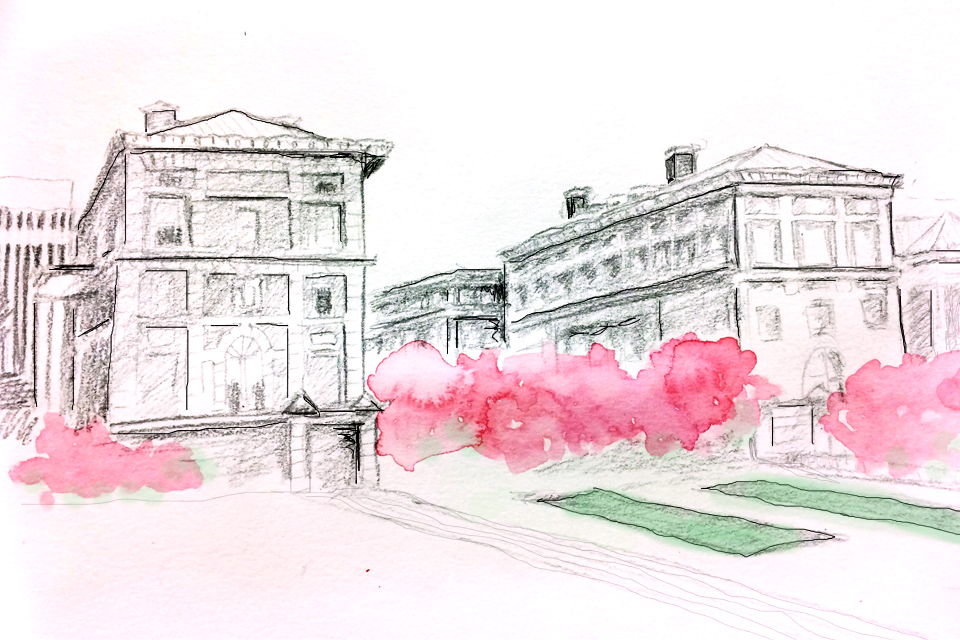 Hi, I don’t think we’ve been formally introduced. My name’s Jarett Poliner. I’m a columnist for the Columbia Daily Spectator. And this is my last column (at least for the time being).

Now, before I join you all in Butler to prepare mentally and psychologically for finals, I wanted to write a bit about what I wanted to accomplish with Class Half Full. When I decided I wanted to do a column this semester, I didn’t want to be another screaming voice on campus. I didn’t think I was the right person to write about injustices in politics, student issues, or things I didn’t like about our student body. Rather, I felt there was something more abstract I could and should focus on: optimism.

If you’ve met me or have read my columns before, you know I’m not exactly a plucky enthusiast with a can-do attitude. So why Class Half Full? Beyond it being an awesome name for a column, Class Half Full wasn’t meant to shoot for sunshine and daffodils. I wanted my column to challenge the negative assumptions that I made regularly. And, at the same time, I found many other students at Columbia were also easily persuaded to look at issues with the same dismal outlook. Some went as far as to revel in the dismay.

At Columbia, students find unity in shared suffering, whether it be over the angst of midterms, an unknown headliner playing at Bacchanal, or an upsetting election result. While the “common struggle” does bring people together, it’s ultimately only bonding over one sentiment: “Me and my problems.” While I’ve been guilty of complaining about my problems to make conversation or to create a cleverish post on columbia buy sell memes, I don’t think one should default to this mentality.

Negativity is becoming a trend—to the point where people reject idealistic narratives as immature or ignorant and understand life as having only contextual truths. Generally, the liberal collegiate youth no longer believe in grand truths like there being one true God, world peace, or an inherent good. This skepticism might showcase an awareness of the horrors of the world, but there are no redemptive qualities to this type of closed-mindedness. Plus, it’s a bit depressing to remain resolute in our own opinions, only to jump to declare other ones invalid.

The result of this mentality is a lot of people yelling at each other ad nauseum about their opinions and their misery. Contemplating this seemed so bizarre to me when I got to Columbia—I thought college was supposed to be the time where we shared and explored different ideas. Instead I found we, like much of the rest of the world, fought over them.

So, while I didn’t want to hold back my opinions on my columns, I wanted to force myself to keep an open mind and look for the positives. It’s easy to vent your frustrations and anger. But it’s a different thing entirely to look at something you don’t agree with and say, “OK, I see where you’re coming from.”

I remember getting lunch with a couple of my friends earlier this semester, and they were arguing about something—I think it was over Migos. And I remember at one point in the conversation, one of them said, “So just tell me, is there anything I can say that could change your mind on this?” After pondering for a moment, the other replied, “Nah.” They then continued to argue for the rest of lunch.

I get that friends argue over petty stuff all the time, but I think there’s a clear mentality on campus of having to be right. But trying to prove ourselves right doesn’t get us anywhere—it only further divides us. We can only agree on the things we hate; it makes it that much harder to really relate to one another in a positive and healthy manner.

Compromise shouldn’t always be associated with weakness. It’s an acknowledgment of another’s views and values. I didn’t want to write about my problems and why I was right. I wanted to focus on larger issues we might not think about in the things we see everyday, and I wanted to do this by looking for positive solutions to those issues.

That was my intention. But what I ended up finding myself writing about most was how we relate to things—friends, strangers, music, or ourselves. And while I didn’t realize it at the time, I’ve found that most of our positivity comes from the way we relate to things.

We could look at everything through a postmodern lens and offer no sincerity or honesty in how we relate to things. Or we could choose to cherish and cultivate these relations and better shape ourselves and those around us. A big part of being open-minded and positive is managing how we empathize.

So, I guess if there’s anything I’d want you to take from my columns, it’s that none of this should be that serious. Things can be easier if you allow them to be. It just takes a little sincerity.