Don’t just be a spectator

Don’t just be a spectator 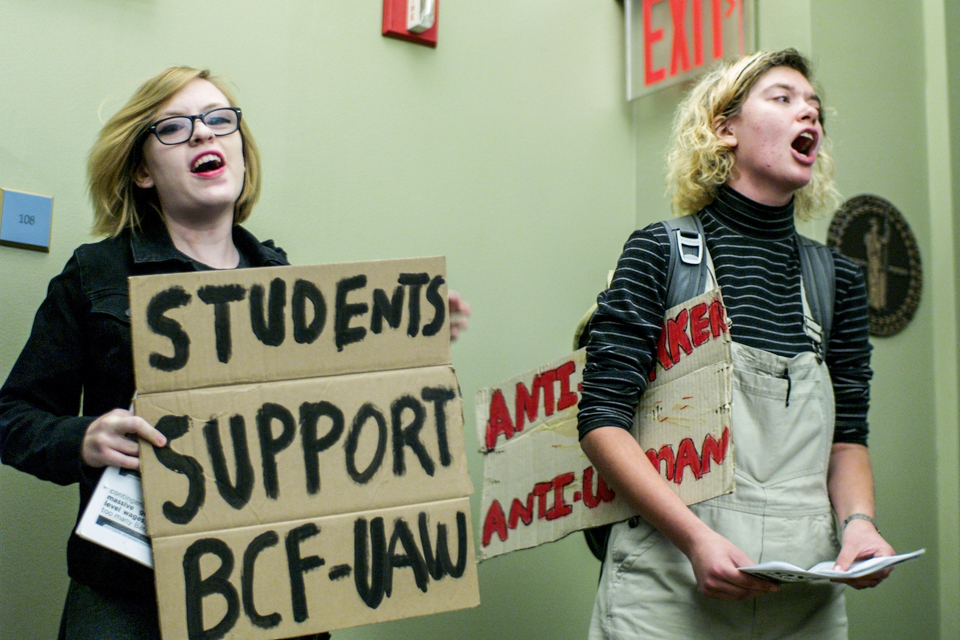 Before I came to Barnard, I was heavily involved with a wide array of issue-based and electoral campaigns and organizations. As I was preparing to start my first semester, I spent a lot of time contemplating whether or not I should dedicate my time to campus-based campaigns. Why not focus on issues at the city, state, national, or international level?

But after years of watching my mother juggle two underpaid jobs to make ends meet, I was quickly galvanized into taking action on campus when I learned that Barnard’s adjunct professors were paid low wages and weren’t provided affordable healthcare. Additionally, the fact that this supposedly left-leaning, feminist college had retained a reputedly hostile, anti-union law firm to handle contract negotiations with the newly formed contingent faculty union struck a nerve with me.

It became increasingly clear to me that “campus issues” can’t be divorced from the larger systems of exploitation and oppression that underpin injustices and inequities at the city, state, national, and international levels. Moreover, I saw how students can help build the movements and organizations necessary to dismantle these systems—not just to win victories on campus, but to set larger precedents and take advantage of the platform and leverage we have as Barnard and Columbia students. With this analysis in mind, I was incredibly excited to start at a school with such an activist reputation.

When I arrived on campus, the reality that most students aren’t paying attention to labor issues started to sink in. Initially, I thought that my new friends didn’t know about the contingent faculty union because we were first years. Fair enough. However, I began to notice that even if they had heard something about the contract campaign on campus, cynicism and apathy (and perhaps the comfort of lifelong class privilege) often stymied their willingness to get involved. While a lot of other students seemed sympathetic, their sympathy didn’t necessarily translate into action.

Fortunately, I found a lot of student activists who were working to change that when I became involved with Student-Worker Solidarity, an organization at Barnard and Columbia that fights for workers’ rights and economic justice. During the Barnard Columbia Solidarity Network’s “Disorientation” events and Student-Worker Solidarity meetings, student activists invoked the history of social movements at Barnard and Columbia, and highlighted ways to continue their legacy.

While it was important to discover our school’s long list of building occupations, commencement banner drops, and rallies on Low Plaza, I also learned that achieving change required more of us than just passively supporting causes—students need to get organized and take action.

On a quiet weekday at the end of September of my first year, I took my own first steps in helping write the next chapter in our school’s history of activism. Outside of Barnard Hall, an energetic group of students and members of the Barnard Contingent Faculty Union gathered to deliver a petition to then-President Debora Spar’s office in between classes. Signed by more than 800 Barnard alumni, the petition called on the college to negotiate with the contingent faculty union in good faith.

We passed out flyers, chanted, listened to a few speeches, and marched from the main gates to Milbank Hall with painted cardboard signs, United Automobile Worker flyers, and more than 800 individually printed pages of the petition. Spar wasn’t in her office when we arrived, but we still delivered it to the workers inside.

From going door to door in dorms to creating a Strike Zine, we made a point of ensuring students heard more than just the administration’s side of the story throughout the rest of the campaign. A few days before the union’s strike deadline, more than twice as many people showed up to our next scheduled petition delivery. In an exciting turn of events, that petition delivery turned into a spontaneous celebration after members of the union’s bargaining committee announced that they reached a tentative agreement on a first contract a few hours beforehand.

While Student-Worker Solidarity definitely can’t take credit for the victory—the union spent two years organizing, one year bargaining, and even set a strike deadline—we used our position as students to increase pressure on the administration. Our role was elevated by the presence of previously disengaged students, the commitment of organizers, and the support of other student activist groups.

All that said, there is still a lot of work to do at Barnard and Columbia. We can make the University better for students, campus workers, the community, and the world. It may seem overwhelming or out of your control at first, but now is not the time to sit and watch from the sidelines. Don’t just be a spectator—be an organizer.

The author is a sophomore at Barnard College studying history and sociology. She is involved with Student-Worker Solidarity.