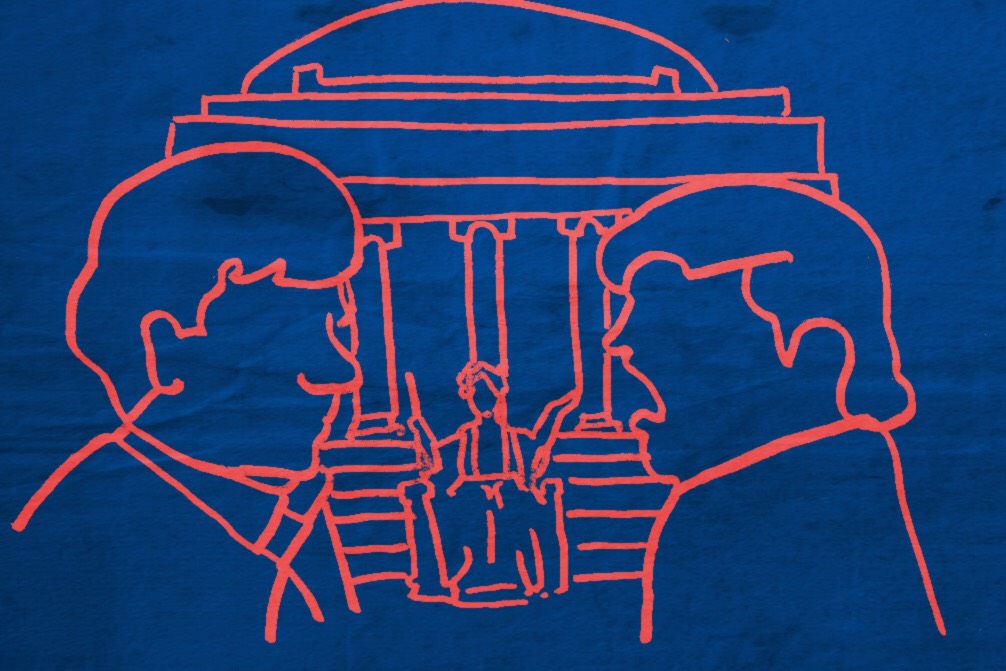 What if I told you that President Bollinger and President Trump have more in common than you might think?

At first glance, President Trump and President Bollinger don’t share many of the same values. From Trump calling Bollinger a “total moron” to Bollinger stating that Trump’s presidency “is a challenge to what Columbia stands for,” the presidents in Barnard and Columbia students’ lives certainly seem like ideological opponents. Indeed, Bollinger’s administration has explicitly condemned some of the egregious policies enacted by the Trump administration.

The Columbia administration’s actions, however, speak louder than these words. In refusing to honor the overwhelming democratic decision of Columbia graduate workers—teaching assistants and research assistants—to unionize, President Bollinger is behaving much like longtime union buster President Trump. And by hiring anti-union lawyers and repeatedly filing laughable objections with the National Labor Relations Board, the Columbia administration has made clear its intent to delay bargaining and demoralize its graduate workers.

More alarmingly, it is becoming increasingly apparent that the Columbia administration, while vocally criticizing some of Trump’s policies, is quietly eager to use others against their employees.

The Senate’s recent confirmation of Trump’s two appointees to the NLRB has created a new Republican majority on the board, one which is poised to undermine the rights of workers in a variety of industries. For graduate workers in particular, the unsettling possibility looms that the 2016 NLRB ruling that permitted them to unionize will be overturned. The Obama-appointed NLRB had in fact overturned a Bush NLRB decision, so a Trump NLRB setback would not be fatal but would yet again strip thousands of graduate workers seeking unionization nationwide of their rights.

Before the union election, Columbia circulated a misleading anti-union FAQ and two administrators published a fear mongering op-ed. In the face of these obstacles, graduate workers still voted 1,602 to 623 to unionize. Now, with the prospect of a Republican-controlled NLRB weakening workers’ rights, the Columbia administration’s deliberate strategy of delays and foot-dragging display a willingness to compromise democratic principles and embrace the policies of the same Trump administration that it claims to oppose.

Classes for the Core Curriculum, the importance of which President Bollinger emphasized after the election, are often taught by graduate workers. If the foundational ideals of justice and democracy are so vital for Columbia students to learn, then isn’t upholding basic democratic principles an important lesson to teach by example—especially by the man who was elected to a committee on the future of voting?

As an undergraduate student, I know that my first-year transition from high school classrooms to Columbia’s large lectures would have been much more difficult without discussion sections and the extra help I received in teaching assistants’ office hours. Graduate workers are central to our education, yet they can be fired without due process, are unprotected from possibly discriminatory treatment by their supervisors, and face frequent late pay.

It’s easy to assert that “it’s not necessary to have unionization for students” when you aren’t worried about paying your rent or putting food on the table. Certainly, one of the highest-paid private college presidents in the nation doesn’t seem to have such concerns. Sadly, Bollinger’s anti-union remark is in line with the general environment for workers at Columbia. This is, after all, the university that allowed temperatures in the kitchen of John Jay dining hall to reach 115 degrees and would allegedly not permit Butler Blue Java Coffee Bar workers to speak Spanish around students.

In our current political moment, the wide array of issues that the Columbia graduate workers union seeks to address is particularly pressing. The union has been providing support for international graduate workers, advocating for the revitalization of federal science funding, and fighting against sexual harassment in the workplace. Similarly, the United Auto Workers, of which the graduate workers’ union is a part, helped file an amicus brief with the Supreme Court against Trump’s travel ban.

In stark contrast to its ostensibly progressive reputation and rhetoric, Columbia is engaged in a deeply unethical and unprincipled battle against graduate workers. Columbia should respect the immense and indispensable contributions of graduate workers to the realization of the University’s educational goals by dropping its objections, recognizing the union, and starting to bargain. It’s time for President Bollinger to express real respect for the academic labor of all members of this community, rather than wield dishonest stalling tactics that inadvertently place Columbia’s administration on the same side as Trump’s new NLRB.

In his 2017 commencement speech, President Bollinger remarked that “We must be careful not to take ‘political’ sides.” Ironically, it’s increasingly clear that the Columbia administration has taken one—and it’s not a side that history will remember kindly.

Meghan is a sophomore at Barnard College studying history and sociology. She organizes with Student-Worker Solidarity and hopes that her writing inspires critical thinking and collective action. Her column, Left Turn, runs alternate Tuesdays.