On balanced diversity in the classroom

On balanced diversity in the classroom 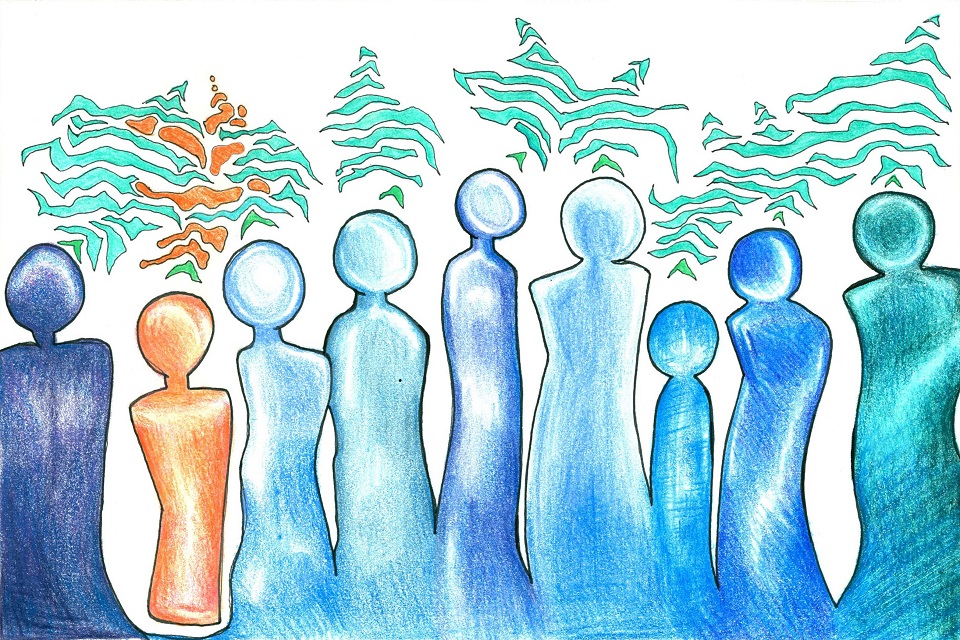 We went around a circle of about 20 people, and it wasn’t long until I realized that a large portion of the class was Latinx, more than in any other class I’ve taken. People spoke of their favorite homemade meals, of the best Dominican food they’d found in Washington Heights, or of dishes I had never heard of before. When it was my turn, my food of choice was ceviche: a dish that I liked, that I thought sounded incrementally less generic than “tacos” or “burritos,” and that I knew for sure was Peruvian. Or so I thought, until my TA asked, “Do you prefer Peruvian or Mexican ceviche?”

I froze, afraid to admit that the ceviche I’d had was actually in Spain, in a fusion restaurant, not in Latin America at all. “Uh, Peruvian?”

There was a brief awkward silence before we quickly moved on to my friend Isabella, who is Puerto Rican and Dominican and actually knew what she was talking about.

In the moment, I was slightly embarrassed. And the situation is trivial, I know. But I realized later that it was a small, but representative, example of the overall experience that I’ve had so far in Latin American Politics and Intro to African-American Studies—two courses I’m taking this semester with ethnic demographics that reflect the subject matter of the classes. In both classes, I am one of a below-average number of non-Latinx or non-black students, respectively.

I signed up for the former course to fulfill my political science major, and the latter to fulfill my Global Core requirement—but I’ve gained an understanding about other identities that I hadn’t expected.

I’ve found my experience learning about history, politics, and culture enriched by being surrounded by a number of people who not only know more than I do about the topics at hand but also hold some personal connection to them. It seems like an inversion of the daily experience of most minorities in white America; it gives those of us who don’t belong to those groups a taste of what it’s like to be the odd ones out, while being educated in a more nuanced way about another region or identity.

Of course, as an Asian-American, I also belong to a minority in this country. But I still find myself noticing how different my learning experience is when I’m put in a classroom with a significant number of peers who personally identify with the subject at hand. People like me, who don’t belong to that identity, are more conscious of how much space they take in discussions. We learn to ask instead of assume, and we learn how to respectfully defer when necessary, to contribute our own perspective to the conversation only when it fits.

At a school with Global Core requirements and a dedication to increasing diversity, we frequently argue that we need to push ourselves to learn more about other cultures—this is a valid argument, of course. But just as I instinctively wonder why there aren’t more non-black students in Intro to African-American Studies, I begin to think about the opposite: At what point would the class become so dominated by other identities that the learning experience provided by the significant presence of black students—the very learning experience that I’ve found so meaningful—would no longer exist?

In an era of identity politics, these fine lines in balancing diversity are puzzling and contentious. At Columbia, you hear constant complaints about the white East Asian Languages and Cultures major who fetishizes Asian culture and insensitively asserts himself in the field without any personal connection to the region. Reconciling these two issues—pushing people to learn more about others’ cultures while preventing the outsiders’ domination of cultural studies—is difficult and, quite honestly, not always within our control.

What we can do, however, is be conscious of our own presences and perspectives. I recognize that I will never understand what it is like to be African American, so in Intro to African-American Studies, I take care to listen to those who do have that experience. When I offer my own opinion, it is with a willingness to understand and with a respect for an identity I do not and will never possess. Though we may find discomfort in these situations—like not knowing Latin American food well enough in a class of Latinx peers—we need to realize that some discomfort is essential to better understanding an experience that is not ours.

And even in different circumstances, we should continue to check ourselves. Issues of cultural insensitivity arise when there is no longer the uncomfortable but necessary reminder that, if you don’t belong to an identity, you have less authority to speak on it. But that reminder shouldn’t only be external. It should be constant and from within, a sense of caution that comes with the curiosity and openness to learn more.

Monica Gu is a Columbia College sophomore studying political science and history and a former associate editorial page editor for Spectator. If you want to discuss how you feel about Mark Lilla’s discourse, email her at monica.gu@columbiaspectator.com. MoHi With Monica runs alternate Mondays.