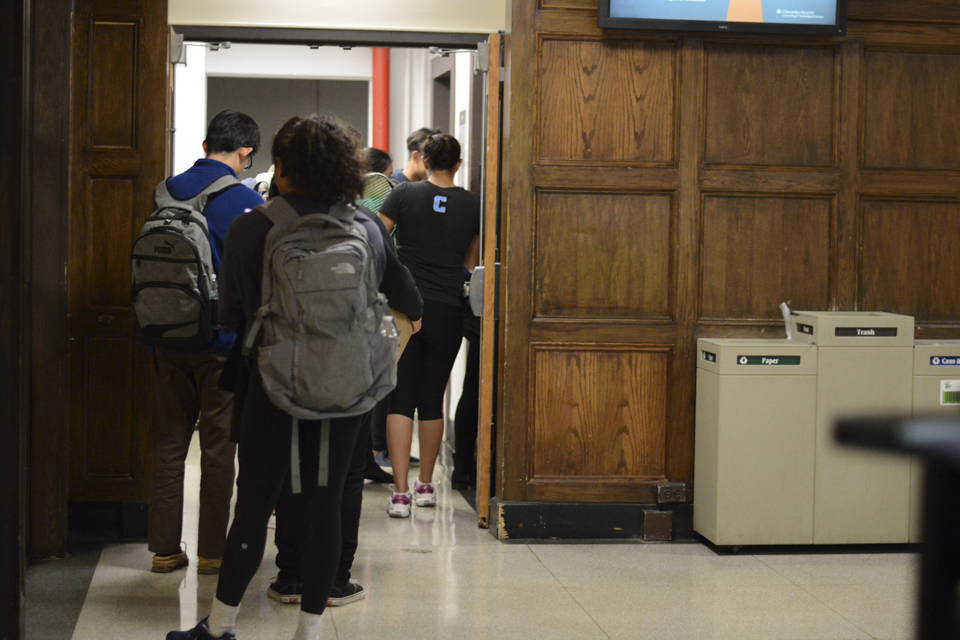 This is the John Jay 5 mantra. But why has this statement become our most fervent, tenacious assertion of group identity? I believe the answer reveals a vicious cycle of discourtesy in John Jay Hall and demands a reevaluation of elevator etiquette from all involved.

Brandon Chin, our fantastic RA, outlined the “political” situation at our first floor meeting. He observed that “floor-fivers” often experience some level of pushback from other residents when they use the elevators, citing sensitive upper-floor folks and the occasional fifth-floor elevator hog as key contributors to the issue. He encouraged us to judiciously balance our consideration of higher floors’ needs with our obvious right to access the building’s amenities.

I was on board. It seemed clear to me that we needed the elevators the least. Beyond times of need or the occasional splurge, stairs would be the go-to method of ascent, and most of my neighbors adopted the same policy.

A few weeks later, my commitment to courtesy was fraying. I recently had a day on which I walked 12 miles, capped by a trip to Wien to pick up the heaviest package I’ve yet received. I plodded my way back to John Jay, fumbled past the security desk, and bypassed the stairs. Dripping with sweat, bemoaning my sore feet, and eager to pee, I crammed into the magic box and pressed the button for five. Immediately, from the back of the elevator: “Floor five, man? Really?”

Shortly after, I received a message to our floor GroupMe from Brandon: “I’ve been asked to remind everyone of elevator etiquette! If you can take the stairs, be courteous and take them, but if for whatever reason you can’t, then feel free to use the elevator.”

I know my controversial trip was not the sole reason behind that message, but it sure felt like it. Could I have taken the stairs? Yes. But it seemed that the definition of appropriate elevator use handed down to Brandon put me solidly in the wrong. Another question nagged me: What if someone who actually wasn’t able to climb the stairs had been snapped at in the way I was? The comment, unfair in my case, would be inexcusable in that scenario.

My floormates reported similar stresses. Even if they used the elevator for one out of 20 trips, that one use was frequently accompanied by eye-rolls, pointed looks, or sarcastic comments criticizing their apparent breaches of etiquette. I shared the workarounds I had devised to diffuse the social pressure: riding up to the ninth or 10th floor and walking down, only riding up if no one else was waiting, et cetera.

As time went on, a growing number of my floormates and I eschewed our initial agreement in favor of a more direct approach: screw courtesy. If weeks of walking on eggshells result in attitude from our fellow residents and patronizing reminders from the powers that be, why bother? I started making it a point to take the elevator as often as possible, and I made sure people noticed. Suddenly, robbing convenience was a two-way street. I felt vindicated even as I advanced the vicious cycle of contempt.

I stopped my hoggery after a brief period of intense venting, but the rationale behind my behavior remains close to the surface for floor-fivers. We have every right. We mutter this to ourselves as we navigate the uneasy geopolitics of elevator use. It’s clear that the tensions between our floor and everyone else living in the building could erupt into a spiraling conflict of blame, bad behavior, and damaged hall relationships at the drop of a hat.

We can do better, and we must do better, before time hardens our habits and our hearts. I propose that we approach elevator etiquette from a new standpoint of empathy. I encourage my floormates to remember our initial promise: to always be mindful that we need the elevators least. And, in turn, I urge our fellow residents to realize that climbing four flights of stairs to get home (every single time!) becomes a chore. Withhold your judgement from the occasional floor-fiver in the elevator. We’re riding for a reason.

This new empathy—really considering the reasons people ride—holds lessons for elevator etiquette beyond our John Jay squabble. I ride occasionally because I am worn out, but someone else could be riding because they have a real disability that isn’t visible. I think about how I felt getting called out that one time and wonder how many people contend with similar treatments on a regular basis. I don’t want to wonder. I want to know that at Columbia, there is no way a trivial elevator trip can darken someone’s day. This goal is in reach—if only we’d ride with empathy.

The author is a Columbia College first-year majoring in urban studies. He enjoys dishing it out but isn’t quite sure about taking it. You can find him on campus seeking the company of people who read bylines.