Free speech on the field

Free speech on the field 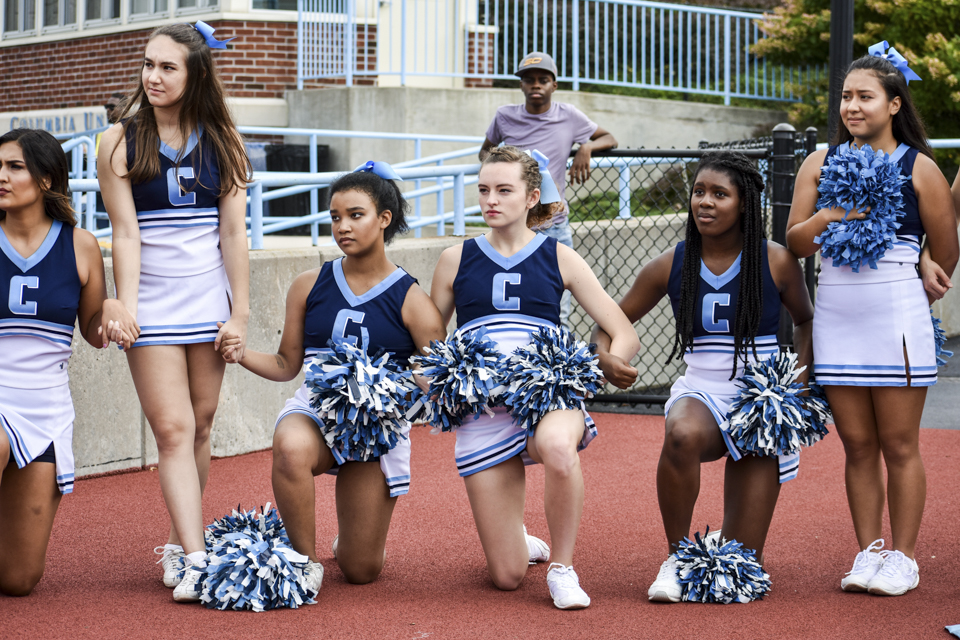 Unless you follow me on Instagram or Spectator on Twitter, you are probably unaware that many members of the cheer team chose to take a knee for the first time during the national anthem at the homecoming game against Penn. We each had our own reasons for kneeling, and I cannot and will not speak on behalf of any of my teammates as to why they knelt or stood. But we did. You wouldn’t know this because you did not witness our kneeling, nor, in fact, did anyone in the stands. A few minutes before the Lions took to the field, we were moved to an area just behind the football field.

Although the one job of the cheerleading team is to cheer, this particular move was last-minute and seemed to only serve the purpose of dislocating us. I do not want to make assumptions as to who had us moved or the true intent of why we were moved, but after the game was over I was left to face the fact that for the first time since coming to Columbia, I had tried to take on a form of protest and had been moved out of sight and effectively shut down.

Conventionally, cheerleaders are expected to be perfectly neutral: the embodiment of school spirit and a constant fountain of energy, but otherwise ignorable in the grand scheme of athletic events. I don’t disagree with these expectations—being good at my job requires accepting them. But it is easy to forget, when viewing us as the abstract entity of “cheerleaders,” that we do still exist as Columbia individuals, and that we react to what occurs around us. We do not cheer in a vacuum, just as the Columbia football team does not play in a vacuum, and it would be unjust to assume that politics belong only to political groups on campus.

The protesting of Tommy Robinson’s Skype call on campus, for example, is a discussion I am taking part in, regardless of whether or not I am a member of a political club at Columbia. Every student on campus has a right to interpret what happened. It is easy to overlook the possibility that Robinson could have any impact on cheerleading in any way, given that the topics are completely unrelated, but I, as a member of both athletic and politically active spheres, am still affected by both.

Being on the football field offered me a platform to respond to the ideology of people like Robinson on my own terms. At a loss for conventional political platforms for me to voice my opinion other than a Facebook status, I leaped at the opportunity to have an impact that I felt would be worth my time, completely nonviolent, and accessible to both myself and spectators. However, kneeling is still considered controversial and inappropriate, even at the college level: the Columbia football coach himself has been quoted “disagreeing” with kneeling as a form of protest.

I am left wondering if there is ever a manner in which to address white nationalism and supremacy as an athlete. Regardless of whether it is for the NFL or for a high school game, the national anthem is most frequently played for sporting events. And regardless of who is in attendance, whether it be cheerleaders or fans in the stands, we all have the opportunity to evaluate the state of our country when asked to stand in respect for it. To prevent athletes from expressing their true emotions in the name of American “pride” assumes the exact opposite of what purpose kneeling serves: that I am happy with the way America is. The very moment that I am asked to express my pride in my nation is exactly when I should be expressing my sentiments; if not then, when?

This also poses a problem to the political activism at Columbia. Taking a knee shouldn’t be considered different from regular campus activism simply because it is during a football game. As a campus tour guide, I’m asked to sell that Columbia students are extremely active as much as I can. I’m therefore rightly surprised to find that same institution hindering my own speech. Campus football games are just another part of student life, so taking me out of my role as a cheerleader simply to prevent others from seeing me kneel makes little sense and stops me from doing an activity I have chosen to fill my time with.

Although cheerleading team members are “just cheerleaders” to the audience during sports games, at the end of the day we return to our own lives as Columbia students. Hindering our speech during games results in a stifling of the voices of real individuals within the Columbia community. NFL cheerleaders may not be taking a knee because they risk their jobs, but as a student I lose little beyond my ability to speak my opinion here, in an environment that should be fostering diversity of opinions. An institution that allows white supremacists to speak, in the name of intellectual diversity, should not be prioritizing that ideology over the ideology behind taking a knee.

Eileen Moudou is a sophomore in Columbia College studying chemistry and music. Besides being on the cheer team, she is also a member of the Undergraduate Recruitment Committee and the Black Students’ Organization.