Unions improved my life, and unions will improve Columbia

Unions improved my life, and unions will improve Columbia 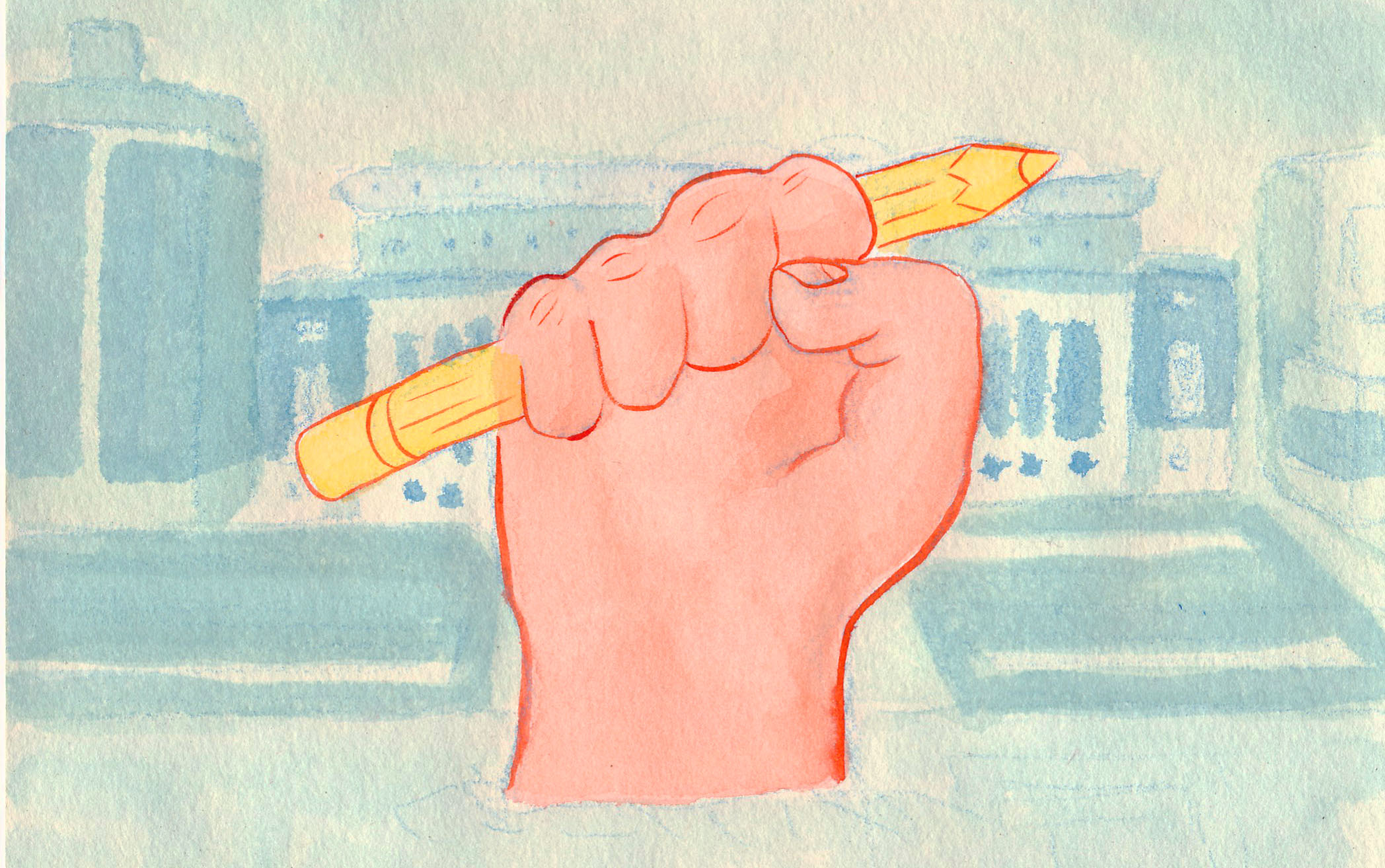 In the imagination of the American public, there is still a stereotypical image of union workers—they toil with their hands at steel mills and on shop floors in Rust Belt states like Wisconsin, Pennsylvania, and Ohio: They don’t work at desks, and they certainly aren’t studying for Ph.D.s at Ivy League universities.

However, we must move past these stereotypes when we consider Barnard and Columbia graduate employees’ attempts to unionize. The Graduate Workers of Columbia University and the Barnard Contingent Faculty might defy standard representations of organized labor, but all workers—whether they are industrial laborers, hospital nurses, retail employees, or graduate students—should be able to organize in support of their rights. It’s time for Columbia to respect this basic principle.

My own family reminds me why working people from various professional fields depend on unions. Like the GWC members, my parents do not have blue-collar factory jobs. My dad writes for film, radio, theater, and television. My mom is an actress on stage and screen. Both of them are proud union members. The presence of labor unions like the Writers Guild of America and the Screen Actors Guild - American Federation of Television and Radio Artists might surprise people unfamiliar with the entertainment industry. After all, film sets and Broadway stages are often seen as glamorous dreamscapes, not sites of backbreaking labor.

Our understanding of the labor landscape for graduate students at institutions like Columbia is similarly clouded by prestige. Like a breakout opportunity in the world of cameras and bright lights, being in an esteemed postgraduate program is a dream come true for many graduate students. Perhaps this is why administration officials like Provost John H. Coatsworth have argued that “graduate students define an experience that is different from that of the typical workplace.” According to this viewpoint, graduate students should be thankful for their spots in the ivory tower, not agitating for reform.

Yet everyone knows that neither Columbia nor the entertainment business is an ideal employer. Like other industries, Hollywood faces workplace issues like safety hazards, unjust wage practices, and, as has come to light in the wake of the Harvey Weinstein scandal, sexual abuse. The GWC aims to address these very issues on our campus. Graduate worker testimonies have alleged wage theft practices that could be prevented by unionization. As an activist organization, the GWC has already won pay increases, childcare subsidies, and parental leave for its membership. Moreover, to quote an Alexa Strabuk piece published in Ms. Magazine, unionized graduate workers would serve as “a powerful force to fight collectively against sexual assault.”

These advantages will also improve the quality of life for more community members than the graduate workers themselves. In 2015, Sejal Singh CC ’15 and Jared Odessky CC ’15 rightly noted that “graduate working conditions are student learning conditions.” Their point remains true today, as teaching assistants continue to grade our papers and exams, give us advice in office hours, and listen to us pretend to have done the readings during discussion sections. We are all affected by their additional hassles that come with late paychecks and underfunded programs.

This is to say nothing of the children of graduate workers struggling to make ends meet. Even if I don’t personally know these kids, I can relate to the anxiety they might feel in a precarious economic landscape for scholars. I remember when my parents and their peers were out of work during the 2007 to 2008 Writers Guild of America strike. My dad’s union was fighting back against powerful corporations so that writers could get a fair share of home video and online streaming profits. I had fun blasting air horns and chanting slogans at daily protests, but my parents had to worry about the consequences of intense labor negotiations. The current union struggle at Columbia probably feels similar for graduate workers and their families.

During the Writers strike, a variety of allies came forward to support striking workers. Everyone from the cast of The Office to then-presidential candidates Hillary Clinton and Barack Obama, CC ’83, took a stand in favor of the union. About a decade later, Columbia’s graduate workers are backed by allies that include major New York political figures like Mayor Bill de Blasio, Senators Kirsten Gillibrand and Chuck Schumer, and high-profile faculty members like professors Saskia Sassen and Eric Foner.

As impressive as the GWC’s list of well-known supporters may be, another key group could make all the difference: undergraduate students. Our unabashed support for graduate workers’ rights would remind the administration where nearly everyone affected by the union vote stands. Columbia College Student Council and Student Government Association recently voiced their support by calling on the administration to officially recognize the GWC-UAW Local 2110. Next week, undergraduates can take a stand by attending a November 8 rally to tell the administration to side with students, not the Trump administration, when it comes to respecting graduate workers’ unions.

These student actions will not end a lengthy labor dispute, but they will provide Columbia’s union members with solidarity and momentum. I personally know the difference that a pro-union stance can make. My parents’ unions are the reason I have had health insurance, scholarship assistance, and a household with fair wages and benefits throughout my college years. There is no reason why graduate workers and their children deserve anything less.

Ben LaZebnik is a Columbia College senior majoring in urban studies. Columbia’s union-bashing is one of the scariest stories he heard this Halloween. The Unwelcome Guest runs alternate Wednesdays.