After graduation, the fight continues

After graduation, the fight continues 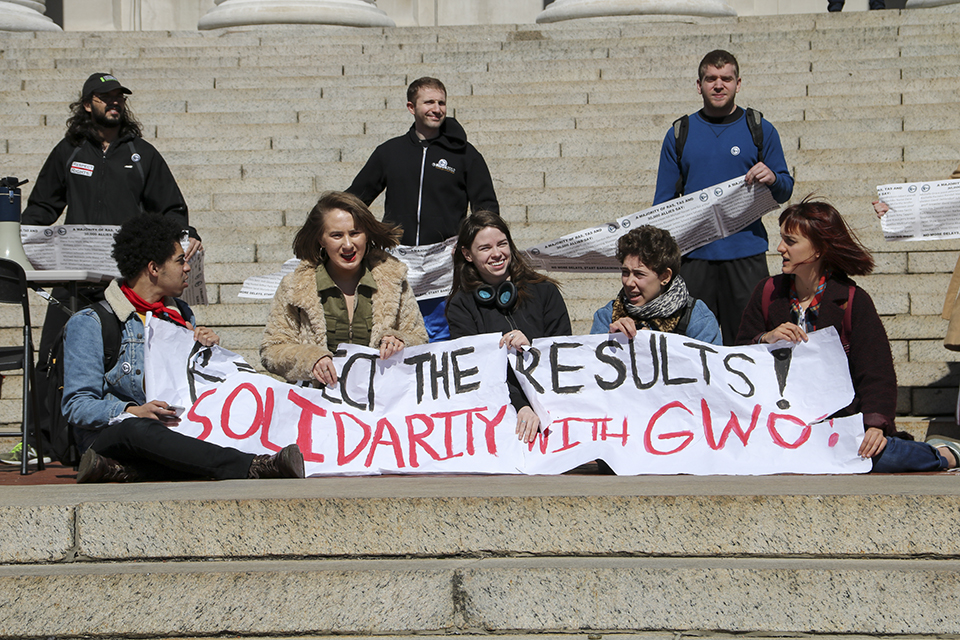 Last week, Columbia’s administration began a disciplinary investigation against students who chose to protest white supremacy on our campus. We write as recent alumni with fresh memories of how Columbia’s indifference to student concerns drove us to organize for recognition of our union.

As members of the class of 2017, our transition from Columbia students and workers to Columbia alumni has been bittersweet. As students who worked as teaching assistants in the Earth Institute and the Center of American Studies for our last few semesters, we proudly joined with 1,602 colleagues in our overwhelming vote in favor of unionization. But we also move forward with deep disappointment over the Columbia administration’s continued refusal to bargain with the union we helped create. We are part of a growing group of alumni urging the administration to start bargaining with GWC-UAW Local 2110, the union for teaching and research assistants at Columbia.

We raised our banner at graduation because we were (and still are) frustrated by Columbia’s refusal to respect our democratic mandate. In December 2016, RAs and TAs voted 72 percent yes (1,602 to 623) to form a union and bargain with Columbia for a fair contract. Since then, administrators have filed a series of baseless objections to the election (which a labor judge recommended “overruling in their entirety”) in an attempt to delay bargaining indefinitely. Columbia students and families deserve to know that their tuition dollars fund union-busting and that the administration still refuses to recognize us as workers.

Our labor helped make Columbia the world-class university that it is. As TAs, we held office hours, graded assignments, and taught recitation sections. Members of our union do important work, from teaching our distinctive Core Curriculum to bringing the University millions of dollars in research grants. We want to bargain so that we can work under stable, enforceable, and mutually agreed-upon conditions.

Every day that Columbia refuses to bargain with us is another day that we lack good protections against sexual assault and unfair treatment, mechanisms to address late pay, and adequate medical coverage. That’s why 32,000 of our allies around the world have signed a petition asking Columbia to drop their objections, and why community leaders from Senator Kirsten Gillibrand to Congressman Jerry Nadler have expressed their support for our union in this protracted fight.

But when it comes to labor policy, Bollinger is counting on the Trump administration. This year, Trump appointed two Republicans who are hostile to workers’ rights to the now majority-Republican National Labor Relations Board. Coincidentally, lawyers from Proskauer Rose LLP, the law firm that represents Columbia University, have recently asked the NLRB to “review” the Columbia case on behalf of the University of Chicago, which they also represent. In the request, the lawyers wrote, “The current Board has a different majority than when Columbia was decided, and Chicago submits that it is probable that the newly constituted Board will reverse Columbia.”

Bollinger has verbally condemned Trump, but Bollinger’s actions demonstrate his willingness to embrace Trump to try to bust our union. President Bollinger and the lawyers he hired are relying on the Trump administration to try to stop us from forming the union 72 percent of us voted for in a fair and democratic election.

Despite this, our union has only gained more support among RAs and TAs since the election. Around 2,000 graduate and undergraduate workers have signed a petition urging Columbia to drop its objections to the union, and more than 2,300 have completed bargaining surveys.

Though we have graduated and left campus, our commitment to the union has not wavered, and this real and urgent fight continues. We are part of a large and growing coalition of students, faculty, alumni, and community members calling for recognition of the union that we overwhelmingly voted for last year.

Securing a fair contract is important for our friends and peers currently teaching and researching at Columbia and those who will do so in years to come. It will also send a strong signal beyond the Upper West Side that private universities must honor recently formed graduate student unions across the country, from the University of Chicago and Boston College (which both successfully formed unions this fall) to a number of others. In solidarity with these student workers, we refused to donate to Columbia this Giving Day, and we continue to hold our alma mater responsible by supporting actions on the Morningside Heights campus.

We welcome anyone interested in supporting workers and defending our collective right of protest to join a rally at noon on Low Steps on Nov. 8, the anniversary of Donald Trump’s election. We are coming together on this day to show that we will not stop organizing until we have a fair contract and to call attention to the ties between Columbia’s stalling and President Trump’s anti-labor agenda.

New students, we invite you to learn more about the four-year history of graduate worker organizing at Columbia and to get involved in the union yourselves. Together, we have the power to win recognition and better working conditions for academic workers at Columbia.