A little more help along the way

A little more help along the way 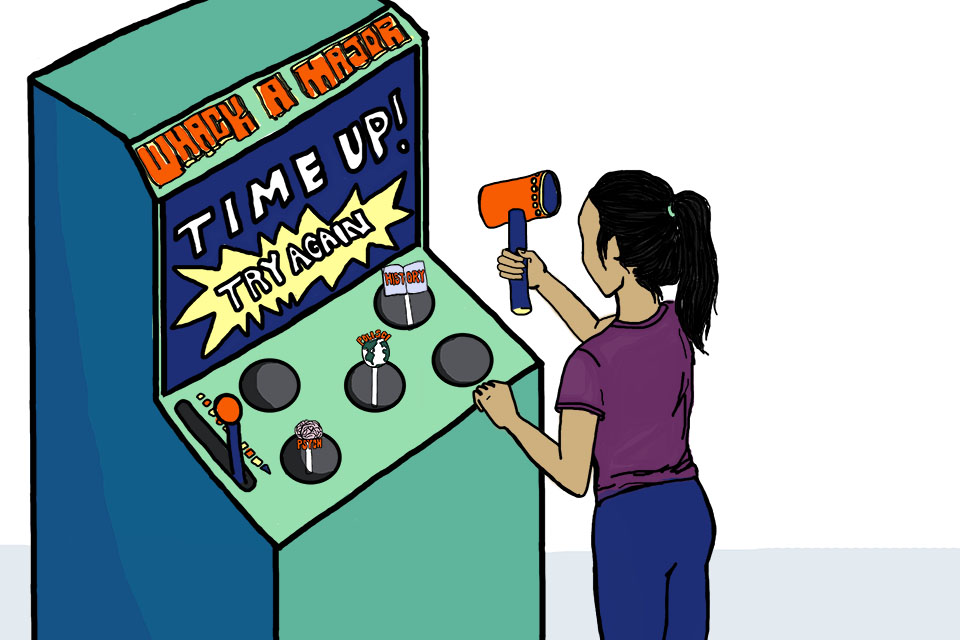 My fall semester as a sophomore has been plagued by one incessant concern: choosing my major. Or majors (plural), or maybe a major with a concentration. I initially came to Columbia thinking that I would major only in one subject: political science. But when my first class registration appointment rolled around, few classes in that department were still open. So, on a whim, I registered for an American history class, and by the end of the semester, I had decided that I would double major in history and political science.

About a year later, it’s nearly time to declare. I’ve taken more classes, I’ve decided to become pre-law, and I’ve become more unsure about my major(s). I’m practically set on history now, which I had never expected prior to coming to Columbia, but I’m lost when it comes to my second major or concentration—or whether I even need one at all. I’ve made spreadsheets of possible schedules for all four years and I practically know all the requirements of each potential major by heart, but I still have no idea what I’m doing. At a school with endless Core requirements, toxic pre-professional obsessions, and a stress culture that encourages daily late nights in Butler, it’s hard to shape your academic path alone.

Unfortunately, the Center for Student Advising at Columbia doesn’t provide the roadmapping assistance that so many of us need. Academic advising at this school has a bad reputation among students; I can’t recall a single positive conversation about the system with any of my peers, regardless of year. Many students are repeatedly switched between or given new advisers across their four years, and advisers are not nearly as accessible as advertised. Appointments are brief—thirty minutes at most—and advisers are constantly overbooked. When students attempt to schedule an appointment with an adviser other than their own, they’re turned away.

The advisers themselves aren’t necessarily to blame. While the advising page holds the profiles of 37 staff members, a current glance at the academic advising appointment portal shows only 27 available advisers—for around 6,000 undergraduate students in CC and SEAS. Even with the assumption that all 37 staff members are active advisers, and that advisees are equally divided, each member would still be assigned around 162 students. Overwhelmed with advisees, academic advisers often run behind on appointments, confuse students, forget to respond to emails, or unintentionally encourage students to take classes that they can’t handle.

I recently met with an adviser who, after ushering me into his office directly after another student, quickly handled all the logistical tasks I had come for, then asked me about my majors. He suggested potentially traveling abroad and mentioned planning my schedule for the next few years. Shocked by his efficiency and friendliness, I spoke about him with a friend, who I knew had recently become one of his advisees. “Yeah,” she said. “Isn’t it amazing to have an adviser who actually seems to care about you, and who knows what he’s doing?”

Yet whenever I try to schedule an appointment with this adviser, I find most appointments booked, and the one or two appointments that are available—or his walk-in hours—are always during my classes. When I requested to have him as an adviser, it took a month to receive news that the change had taken place. It’s frustrating to feel that you’ve finally found something good, only to be locked out by bureaucratic inefficiency once again.

Columbia students, and the community as a whole, already struggle with an obsession with self-sufficiency and, subsequently, isolation. We do things on our own because everyone else seems to have their lives together, and asking for help would mean admitting to some kind of weakness. This attitude is one of the biggest reasons for the stress culture on this campus, and it’s a self-perpetuating force. Students don’t ask for help, and rarely do we offer it. When we do reach out for guidance and support, only to face the inaccessibility that exists with advising, we withdraw into ourselves even more.

Academic advisers need to become more accessible to students in CC and SEAS, and the resources that are available to us should be better advertised. Whether that means hiring more advisers or restructuring the system, Columbia must change the way that it helps its students. As a sophomore who hasn’t even declared her majors, I feel terrified and uncertain of my future, and I know I’m not the only one. We need more help than what is available to us—whether that’s in deciding our majors, planning our classes, organizing pre-professional paths, or just figuring out how to graduate on time—in the form of more accessible, involved, and competent advisers. We shouldn’t be carrying our burdens alone.

Monica Gu is a sophomore in Columbia College studying history and political science, though she’s changed her mind about that combination about seven times in the last week. She is a former associate editor for the Opinion page of Spectator. MoHi with Monica runs alternate Mondays.