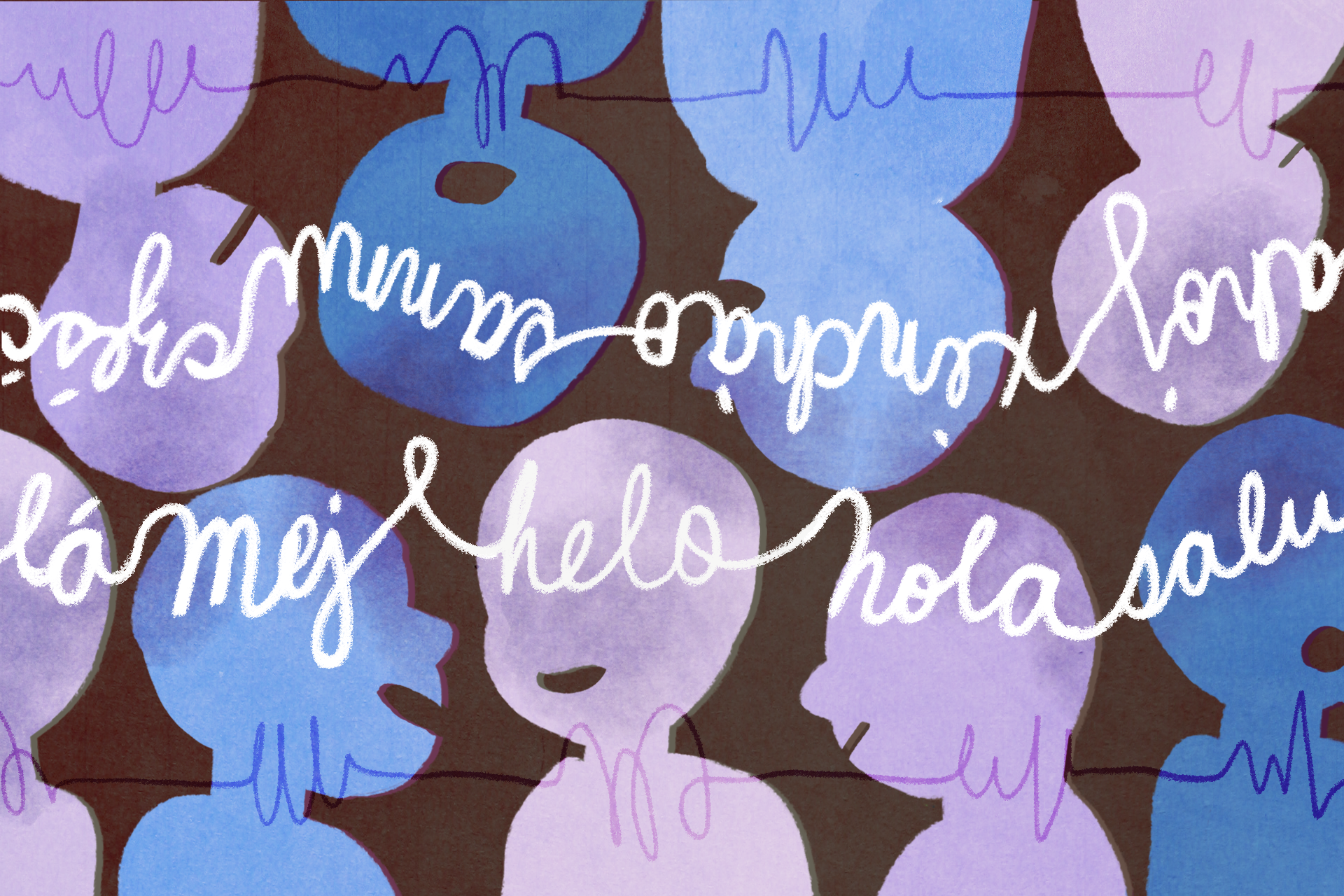 I love watching people’s faces when my mom speaks to them in Mandarin. Blonde-haired and blue-eyed, her vocabulary isn’t as wide as it once was, but her accent still retains inflections from the life and work she did in the Hunan province after graduating in the ’80s. The businessman she asks for directions or the tired-looking mother she chats with both acquire identical looks of quiet surprise. Maybe it’s not supremely odd, but it’s certainly out of the ordinary. It gives me a sense of pride.

It’s estimated that up to 800 languages are spoken in New York City. On Columbia’s campus, I’ve had the distinct pleasure of walking by a couple gossiping in German, sitting at a table next to friends chatting in Hindi, and overhearing a kid getting scolded by a parent over the phone in Portuguese. Columbia offers courses in more than 55 languages, not including the ones that are offered in partnership with NYU, Cornell, and Yale. So why does it feel like foreign languages are so hard to hold onto here?

Many universities in the United States recommend or require a student applicant to have taken a foreign language in high school. Harvard recommends four years of a foreign language, while UCLA recommends three but only requires two. For our part, Columbia "strongly recommends” three to four years for a student applying to Columbia College and two to three for the School of Engineering and Applied Science. That’s all well and good; while applying, we’re told over and over again that a school would rather see proficiency in one language than a smattering of skills in multiple. But what about once we get here?

I’ve been told it’s too easy to test out of the language requirement here at Columbia. (Full disclosure: I only tested out of two semesters of French.) The requirement, unless you’re an engineering student and don’t have to take any language at all, is four semesters, or until you complete the 2102 course. But take an Advanced Placement test or SAT II and, with a high enough score, you’re as free as a Brown student to take (or not take) any language you like. Department placement tests vary by language but are also considered easy to perform well on.

It shouldn’t be so easy to avoid taking a foreign language in college. I sound crazy to call for harsher measures (Yeah! Let’s make college more difficult!), but languages in high school are, in my experience, taught very differently than they are in college. Used to my teacher explaining French to us using English, I nearly fainted with shock when my professor spent the entire first class of the semester shooting rapid-fire, perfectly accented French at us. Not to mention the focus on grammar over vocabulary, which is the complete opposite of my high school experience. Had I taken more than 18 months of French in high school, I might’ve tested out of the requirement here entirely and missed so much of the language that just wasn’t on the table in high school.

Language course requirements also vary among schools. Dartmouth and Harvard both allow you to waive it depending on much the same measures that Columbia demands—demonstrated proficiency. Okay, so you’re great in one other language. First of all, I wish I had your brain instead of mine, which cannot conjugate to save my life. But, second and more importantly: Start a new one! Columbia’s requirement should be like Barnard’s or Yale’s: impossible to test out of.

Maybe it seems like my argument here is that Columbia should be forcing language learning upon us poor, put-upon college students who already have so much on our plates. And, yeah, I think that it is. (This is coming from someone who breaks out in cold sweats over the subjunctive tense.)

Mandating a language requirement, without granting the possibility of testing out, puts everyone on an equal playing field. You kind of want to start learning Russian—but you also want to start your pre-med track. A “required” requirement takes the heartache and stress out of making that decision. Sure, maybe without it you could pick up a concentration or finish your major sooner, but why not take a little extra time and be able to speak with more of those around you? English, the main language used to teach here at Columbia, won’t be the world’s dominant language forever.

As for students who would rather drop dead than take another semester of Spanish or French, they could be the frontrunners of a Columbia student movement for the preservation of critically endangered languages. We’re all about saving the giant panda, so why not Mapudungun? “Save the blue whale” campaigns are launched; alongside them should be the “I speak Judezmo and you can, too” campaigns. Surely it’s Columbia’s concern, as an institute of higher learning, to help ensure that the remaining languages don’t die out.

And who’s to say that the number of speakers determines the “importance” of a language? If that were the case, why is Classical Greek an offered course at Columbia, but not Bengali or Punjabi, both of which you can be tested in but not taught? What about languages which millions speak but that aren’t offered on campus? Why isn’t American Sign Language taught? Malay? Thai?

Keeping up with a language besides English, even if it’s your mother tongue, is difficult. It’s so easy for your skills to fall into disuse. I used to be conversational in Mandarin, but not taking it for four years has meant that I’ve retained only the most basic of phrases. I recognize and can read individual characters, but my comprehension has quickly and sadly slid backwards.

We have some amazing cultural clubs here, but not everyone who speaks a foreign language joins them—I’d hazard that the majority don’t. I think it’s easy to feel out of touch with your non-English languages here, especially if you don’t have the time or energy to go out of your way to seek opportunities to practice your language. It’s like a muscle, after all; without use, it atrophies—mine did. Installing a language requirement would ensure that students maintain and improve the language skills they previously acquired.

Languages are important. Our student body doesn’t need me to tell it that. Cognitive and cultural benefits aside, it blows my mind that random assortments of sounds have been compiled for certain groups of people to perfectly understand each other. It’s important that Columbia nurture that as much as possible—more than it currently does, at least.

Statistically, the majority of us here as undergraduate students are not, and will not, be majoring in a language. But you could be a secret polyglot—so secret that you yourself don’t know it. The Columbia language requirement, such as it stands, might be too light to help you discover that. More importantly, for those of us who don’t pick up new languages like first-years pick up diseases in their first semester, easily testing out of the language requirement because we slogged through one AP class deprives us of the opportunity to try something new, whether it be taking elementary Swahili or studying abroad in Berlin.

AJ McDougall is an Australian-American English-speaking first-year in Columbia College, likely majoring in English (shocker) and, as of this week, theatre. You Have My Word runs alternate Wednesdays.