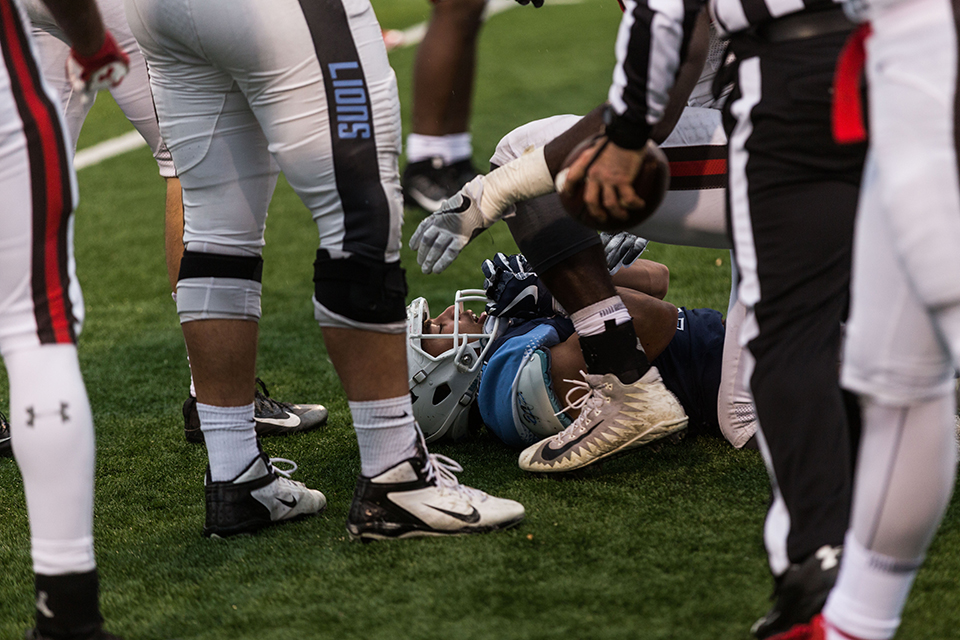 For Columbia students, it seems like there is no better time for football. Columbia has just finished its best season in decades, and Al Bagnoli has been named Ivy League Coach of the Year. However, amid all of the excitement for football this terrific season has generated, a looming threat to the entire sport is lurking in the background. It is becoming increasingly disquieting and impossible to ignore.

The threat most recently manifested itself in the news regarding former New England Patriot Aaron Hernandez, who was charged with murder and subsequently died by suicide earlier this year. An autopsy of Hernandez’s brain revealed that he suffered from chronic traumatic encephalopathy, better known as CTE. Furthermore, Hernandez’s case was the worst ever documented for someone his age.

This news, along with a growing body of evidence pointing to the ubiquity of brain degeneration among professional and college football players, seriously endangers America’s most popular sport. We cannot ignore the dilemmas these findings raise. Whether football should remain in the Ivy League, let alone the NCAA, may be seriously debated in the future, but we at Columbia need to have an honest, fact-based conversation about the safety of football now. As part of an institution committed to greater inquiry and understanding, we cannot potentially endanger the health of our players through ignorance.

CTE is a brain disorder that affects the mood and cognition of those who suffer from it. For normal concussions, the most common brain injury for athletes, you can usually point to an isolated trauma as the cause of the illness. However, CTE is more sinister—it can develop without a player ever receiving a concussion. It is the cumulative effect of many harmless sub-concussive blows that causes the disease. Symptoms of CTE include cognitive impairment, depression, emotional instability, aggression, loss of motor skills, and dementia.

A study published in the Journal of the American Medical Association earlier this year examined the brains of 202 deceased former football players. CTE was diagnosed in 110 out of 111 former NFL players, 48 of 53 college players, and three of 14 high school players. If future studies confirm a causal relationship between football and brain degeneration, once we can test for CTE in living patients, we may see a mass exodus from the sport at many levels.

Football fans reading this may be quick to dismiss the problem, confident “better helmets” or rule changes will fix the problem. But the problem requires much more than the prevention of concussions or especially hard contact. The total volume of hits needs to be reduced, not just the intensity.

In Spectator’s recent Discourse and Debate piece on the safety of football, one writer suggested that radically revising football’s rules would be preferable to canceling college football programs altogether. Rule changes to protect the players are good, but minor hits caused by contact with players or the turf are intrinsic to the sport. The only way to fully eliminate the threat of CTE may be to make football totally noncontact, essentially making it a different sport.

We need to start asking hard questions about the role of football on our campus. What are the risks associated with football at the level Columbia athletes play? Do football’s benefits, including the revenue it generates, the (newly renewed) sense of school spirit it fosters, and the opportunities it affords to the players, outweigh the risks it poses to the lifelong physical and mental health of our players? Should we be incentivizing football players, most of whom do not plan on playing professionally, to come to Columbia if many are sustaining permanent brain damage?

Columbia suspended its football program for safety concerns once before. Today, we should be equally willing to do whatever is necessary to scrutinize these issues. The Ivy League has not been exempt from the tragedy of CTE; former Dartmouth running back Patrick Risha began to experience symptoms after graduation, and he died by suicide in 2014 at the age of 32.

In response to CTE concerns, Dartmouth eliminated full-contact season practices in 2010, reducing the number of concussions and subconcussive blows, and the rest of the Ivy League followed suit last year. Measures like these are good, but they may not make enough of a difference; most Columbia players will likely still be hit hundreds, potentially thousands, of times over their college careers.

Regardless of what future studies show, the most important thing is that players know the risks associated with the sport. They deserve full, unbiased information about head trauma and brain health, and it is shameful that the NFL and NCAA have failed to give it to them in recent years.

Data compiled by Stanford researchers showed that one college offensive lineman sustained 62 subconcussive blows in one game. The force of each blow on his brain was equivalent to him crashing his car into a wall at 30 mph. This happens dozens of times per game, and not just to linemen. Most football players have probably never been told that, and this is exactly the problem.

Until we adequately investigate and debate these dangers, we should not have knee-jerk reactions to suggestions that football is too harmful to be justified at certain levels and institutions, including Columbia.

The author is a sophomore in Columbia College studying economics and philosophy. His interests include watching professional basketball and engaging in armchair philosophical debates.