We’re tired of writing about Housing disasters every week

We’re tired of writing about Housing disasters every week 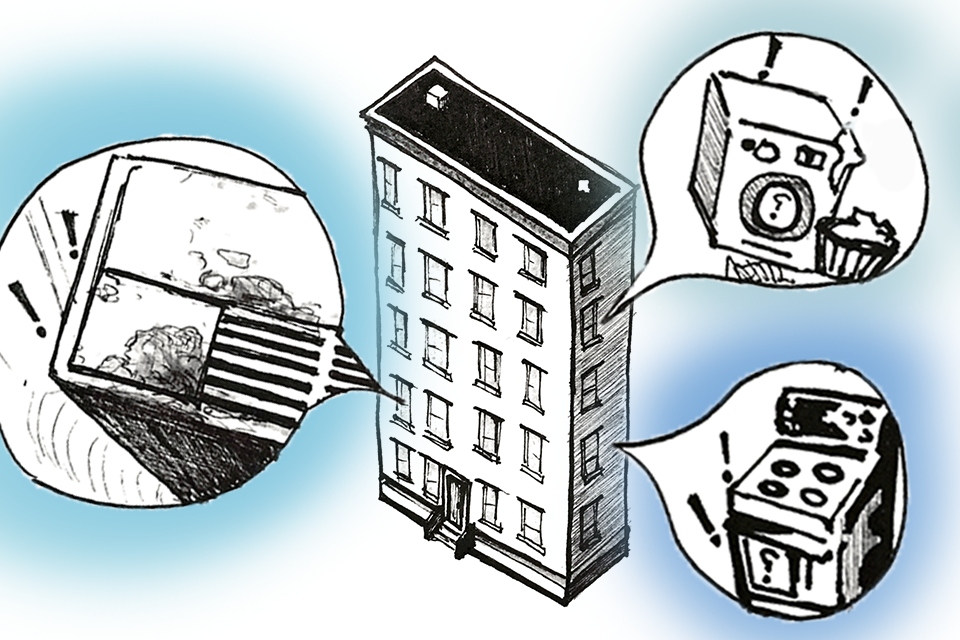 The coveted East Campus suite, in all its glory.

After waiting the customary 3 years to finally move in, this year’s seniors get to experience all of the perks of prime Manhattan living: a stunning view, incessant fire alarms, a hot plate for a kitchen, and decorative mold.

Thanks to record levels of rainfall and humidity, it seems to be everywhere—fungi creeping up on ceilings, along walls, and even under beds. While it does impart some “homely” charm to lounges otherwise covered in Smirnoff bottles, it also comes with a whole host of potential health and safety issues associated with the inhalation of spores and mycotoxins.

Rather than systematically checking every room in EC for mold after the first few reports, Facilities chose to wait until Spectator and other student media outlets reported on the problem to send out an email to all residents. That email, like the others that followed, asked students to individually report instances of mold, so that a third party could come and remove it.

While this may solve a handful of cases, we’re fairly sure a fraternity brother who can’t differentiate mud from a whiskey stain might have some trouble identifying the growth above his AC unit. But does that mean he deserves to suffer from congestion, coughing, or difficulty breathing before thinking to call Housing?

The insufficient and belated response from Facilities regarding the mold is just Housing’s latest. It took a Spectator article to prompt an email about the over 20 fire alarms—also ostensibly caused by excessive humidity—during the first couple of weeks after early move-in. And even after that, it took another week to fix. The pen is not louder than the fire alarm, so we’re really not sure why it took written protests to get Housing to acknowledge and solve the problem.

The issues regarding kitchen renovations were handled in a similar manner—by which we mean poorly and far later than they should have been. Due to renovations, all EC high-rise and townhouse suites are currently without gas ovens or stoves. Although students were informed of this before choosing housing, the notice came after they had already destroyed friendships to form groups of five: a group size which, outside of EC high rises, can only fit in a handful of suites.

But it seems that bad experiences with facilities aren’t just reserved for this side of Broadway. Thanks to the heat, Barnard students have been munching on celery for a few weeks now. After several students in the Quad were hospitalized due to the lack of AC, Barnard students received an extremely helpful email from the Executive Director of Residential Life advising students to “eat foods high in water content,” “schedule a sleepover in an air-conditioned room,” and “avoid the outdoors.”

Much appreciated, Barnard. We’re sure students would’ve liked to have planned their trip to Morton Williams before heading to Mount Sinai, but we’re nothing if not adaptable.

What about our Plimpton residents on the proverbial edge of the world? Well, we’re not really sure. We haven’t heard anything from Barnard Residential Life & Housing yet—though we’re sure Plimpton residents are thrilled to be wearing the same outfit for the third week in a row in this humidity.

A lucky few have managed to use the only working laundry machine in the building, but the rest are left to fend for themselves—sweaty clothing and unusable credit card in hand. Admittedly, having students wait in line for a functioning machine is something our editorial board never considered as a way to foster community on campus, but we’re not convinced forced small talk for hours in a laundry room is the best way to do it.

While these housing issues lack the gravitas of our previous discussions on credit caps and mental health, they’re not trivial, Columbia. We get it, it’s humid. We know Bollinger’s rumored weather machine doesn’t actually work. But we find it hard to believe it’s all that difficult to provide low-income students with fans during a heatwave, at the very least, supply dehumidifiers to EC residents, have more than one working laundry machine, or, God forbid, send out an email regarding issues before Spectator reports on them.

Our housing isn’t separate from our mental health—it’s an integral part of it. While we appreciate the Office of University Life scheduling speed friending and sunset yoga, we’d happily trade all of that in for mold-free suites.

So fix this, Columbia and Barnard. Communicate better. Show us you care.

We’ll just munch on some celery while we wait.