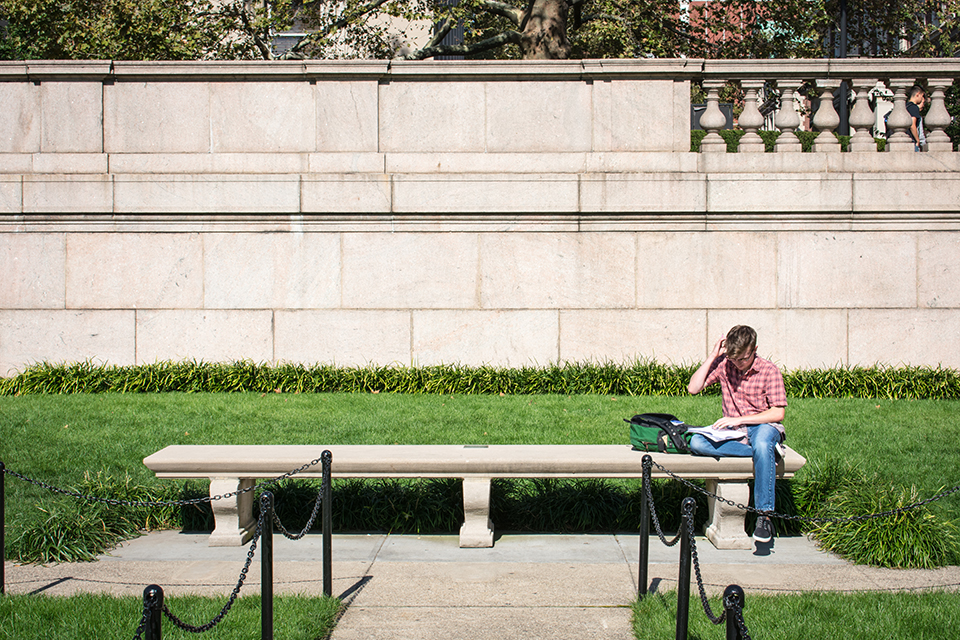 I was thinking about benches recently. I was thinking about benches and how effective they are at preserving space: Multiple strangers are able to sit in one place, and they don’t even have to talk to each other. With my upbringing in what could be considered a typical suburban setting, the idea of “space” never held as much importance as it did before I came to New York.

After all, space is only a priority when it’s limited, and for both New York and Columbia, space is nothing if not limited. I’ve found, however, that space is not the only priority. While benches are efficient in maximizing space, they are not very effective at maximizing interaction, something many Columbia students lack.

So I began to think about tables, which I ponder only a little more often than benches. A table, in many ways, is the opposite of a bench—it encourages interaction by placing people face-to-face with one another. At Columbia, efficient space and interactive space have a complicated relationship, and students have consistently called for more of the latter, as the installation of new tables last year outside of Ferris demonstrates. At the same time, Columbia remains what I would call a “bench school.”

Seriously. Think about the number of benches present on Columbia’s campus, then think about the number of tables. Our perceptions of reality are so often a function of our immediate environment, so when we find it even physically difficult to be a part of a community, we end up feeling like strangers in our own home. We live in a place that is isolating by its very design.

While I find the bench-table analogy a fitting description of how space on campus affects our conception of our community, I find it more apt to describe a bigger problem than Columbia’s lack or misuse of space: the attitude of students. Even when Columbia attempts to create a “study-free” space, as with the recently converted Lerner lounges, the room fills with students and their laptops while the foosball tables gather dust. We are too comfortable with being strangers to each other. Although, like sitting on a bench, we share the same campus space, we often resist even the simplest acknowledgment of one another.

I believe this hesitation is partly due to self-consciousness. Nobody wants to feel forgotten, so why risk an interaction where you might look weird just for remembering someone’s name? If there’s one thing that terrifies Columbia students, it’s revealing a chink in their meticulously polished armor. Yet even more than the fear of interfering with innate campus social code, simply living in New York City affects our views toward each other in more insidious ways than we’re aware. Whether it’s catching the train or obtaining a coveted position at a prestigious company, New Yorkers are in continuous silent competition. When we’ve spent enough time in the city, we become conditioned to be totally withdrawn, adopting the unfocused gaze of urban life.

To a degree, this pattern is reasonable and expected. Our aloofness is a coping mechanism in an unknown world. The problem arises when we subconsciously let this mindset of detachment seep onto campus, and we treat those who we know personally as though they are strangers momentarily passing through our lives.

Of all the generalizations we attempt to make about the Columbia community, there’s only one that we know for sure is true: We were all adventurous enough to come to New York. It’s not easy to live here, and it is common to be lonely in a crowded place. We must be cautious of becoming just another blank face and realize that we at Columbia are a community, not just a bunch of strangers tossed together.

At the end of the day, a university’s community is composed of its student body. If we are to strive for a less isolated and more interactive community, then we are the ones who must overcome the limitations of our space. So say hello. Dare to remember a name. Please, don’t be a stranger, and get off that bench.

The author is a junior in Columbia College. He studies American studies and English, and he enjoys long walks on the beach.