The questions that should have been asked of Ocasio-Cortez

The questions that should have been asked of Ocasio-Cortez 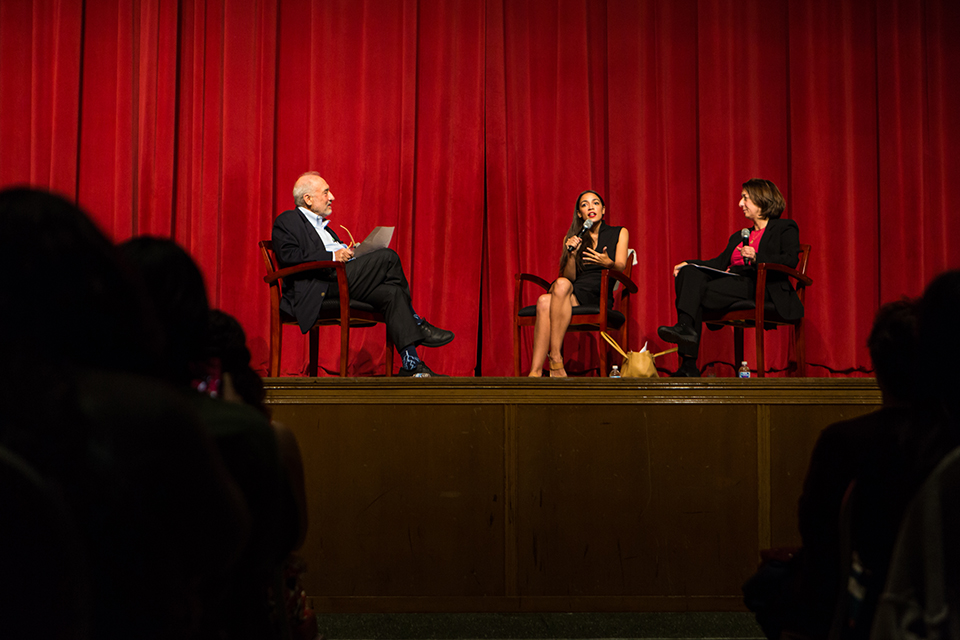 Even as a strong supporter of free market economics, I leapt at the opportunity to hear from Alexandria Ocasio-Cortez—the darling of the democratic socialist left—Monday night at Riverside Church, in what seemed to be one of the most highly anticipated Columbia political events of the year.

The sad thing, though, is that the event wasn’t meant to be a dialogue with students—it was planned as a campaign rally, originally slated to take place on Columbia’s campus.

After attending yesterday’s event, I hope that my fellow students will temper their enthusiasm with a healthy dose of skepticism about Ocasio-Cortez and the political movement that she represents. The policy issues—the debates over health care and immigration and education— can be put aside for the moment; I’m concerned that the democratic socialists have embraced a superficial politics of obfuscation and disregard for accuracy in the wake of their meteoric rise. Columbia students, especially those who identify with socialist politics, face a choice: speak out, or enable these antics.

To be fair, Ocasio-Cortez's most notable foibles are amusing, though not sinister—a botched answer about the Israeli-Palestinian conflict on PBS snowballed into a national embarrassment. Card-carrying members of the “Gini Coefficient Appreciation Squad” probably shouldn’t bungle a rote explanation of the unemployment rate. And despite running on health care reform, she demonstrated an incredibly inaccurate understanding of why the Supreme Court ruled Barack Obama’s Affordable Care Act’s individual mandate constitutional in 2013 during a CNN interview.

These are likely rookie mistakes resulting from a lack of due diligence. However, one can’t help but get the sense that the precise nature of the facts doesn’t matter as much as generating hype for the democratic socialist agenda. It’s not just Ocasio-Cortez— it’s also Julia Salazar, a Columbia alumna and candidate for New York State Senate in Brooklyn.

Like Ocasio-Cortez, Salazar leveraged her working-class, immigrant biography to topple an establishment Democrat. But much of what Salazar told the socialist Jacobin magazine and other outlets might not be true, as Tablet, Vox, the New York Times and others have reported. It boils down to Salazar fudging—if not outright lying—about certain key details of her biography, including her immigration status.

Following the continued support from Ocasio-Cortez and various socialist groups, New York Times writer Bari Weiss, CC ’07, concluded “that Trumpian logic and Trumpian loyalty is now beginning to infect the left.” She’s right: The combination of disregard for the truth, with an unquestioning loyalty to left-wing leaders seems to be a prime feature, not a bug, of democratic socialist politics.

This begs the question—what responsibility do Columbia students actually possess here? The answer should be obvious: We live in New York. Active participation in civic life is something Columbia should teach each of its students—after all, this is why Ocasio-Cortez was invited to speak in the first place, if in a clearly partisan way.

But I’d also like to think that we, as students interrogating the nature of truth, have an interest in ensuring a fact-based political discourse that eschews dishonesty and incompetence. Even Ocasio-Cortez, who on Monday implored the audience to talk about racial justice around the Thanksgiving table, understands that advancing the kind of politics we want requires person-to-person engagement, not abstract ideological commitments.

This also means confronting inconvenient realities when so doing requires you to speak out against others who share your politics. The Columbia University Democrats and the other organizers of Monday evening’s conversation fell short by failing to foster more contentious discussion.

Audience members, for their part, should have asked more critical questions. Here’s one reason why: In August, Ocasio-Cortez banned reporters from attending two otherwise public town hall meetings. Her boosters at Jacobin have made media bashing a key characteristic of socialist writing. On Monday she claimed that mainstream media sources aren’t saying enough about wage stagnation; Stiglitz countered by citing a New York Times series on income inequality.

Audience members should have asked Ocasio-Cortez about her weird relationship with the press.

Alas, CU Dems and the event's other organizers provided little opportunity. Just two students were selected to pose questions. The first questioner prefaced his query with a fawning, “It’s nice to meet you. It’s actually amazing to meet you.” The second presented herself as a member of the Roosevelt Institute, a progressive student policy group.

By contrast, earlier that day in Low Library, a vice-president of the European Commission took more than three times as many audience questions, including from a student whose views were clearly opposed to the comments he had just made.

Our democratic socialist classmates have a duty to hold their political idols accountable. The legacy of left-wing activism on our campus shouldn’t only be something that they get to invoke at their convenience— it should also require that they act as gatekeepers who reject politicians peddling half-baked arguments and outright lies. The organizers of yesterday’s event are right to try to galvanize the participation of Columbia students in political campaigns around New York, but it’s a shame they did it this way.

Jimmy Quinn is a junior in the School of General Studies majoring in political science and a Discourse & Debate contributor. He can be reached at jtq2104@columbia.edu and on Twitter @realjimmyquinn.